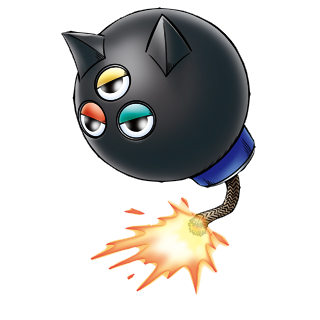 You can see we have a pretty interesting one today just from its dedicated baby stage; an adorably grumpy, three-eyed slime in the form of a bomb! Its attack does not, however, consist of exploding; instead, its fuse slowly burns throughout its life and it always, always evolves before the fuse runs out. This either suggests that the fuse is a countdown to evolution anyway, or Bommon have simply never had a chance to explode. This makes the sparkling of the fuse itself the only defense mechanism a Bommon has, using it to blind attackers. This is all really unique! 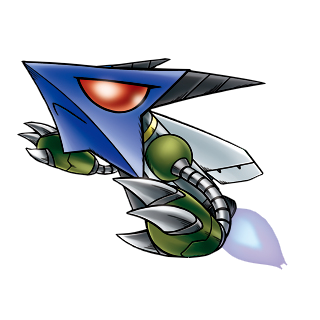 So the next baby stage upgrades to a whole "missile," an almost insectoid little machine digimon who also never actually explodes. Instead, Missimon is just continuously propelled by its rockets, unable to slow down or stop until it, too, evolves into another form, and it isn't even very good at steering itself! I love both of these weapon-themed baby stages, and I love that neither of them actually work right. That's adorable. 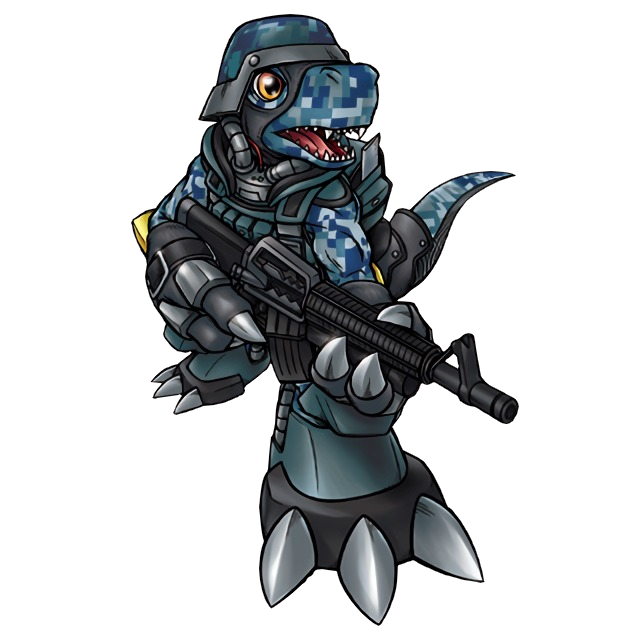 So the child stage is literally nothing but an Agumon trained as a marine and with camouflaging skin. It's Agumon with a gun. They should have just called it Agunmon.

For whatever reason, I actually like Agunmon. I'm impartial to Agumon and lean pretty negative on guns in real life, but put them together and you get something just absurd enough that I'm okay with it. I feel like if anyone deserves a gun, it's a dinosaur...right? 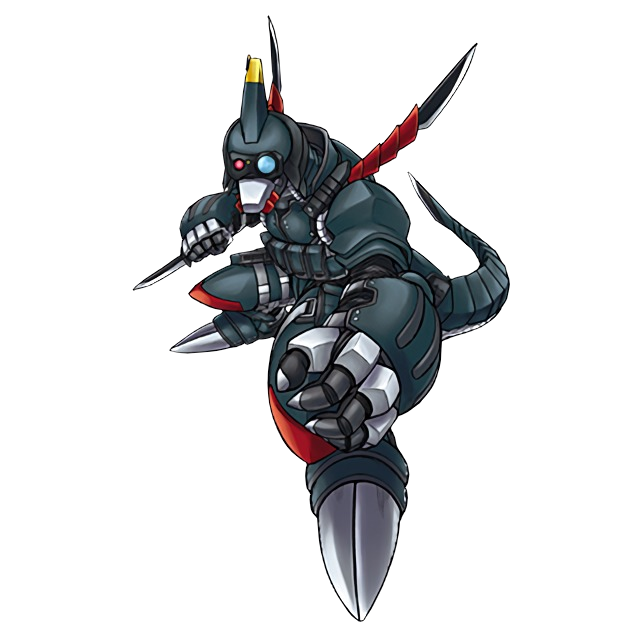 So this is a big dinosaur guy completely covered in stealth armor, and I kind of like the look of it too. It comes in pleasant, muted colors and its two different lenses give it a lot of personality. Said to represent one in 100 Commandramon who complete a special training course, it actually discards all use of guns in favor of a knife "sharpened to the limit," so now it's a dinosaur with a knife, which is kind of even funnier than a dinosaur with a gun. A gun at least does something a dinosaur can't usually do. 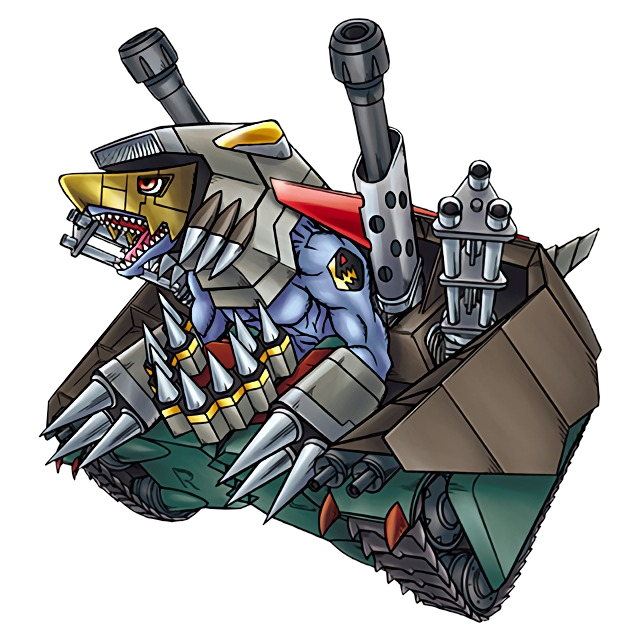 I think this is one of the most awkward messes I have ever seen in a digimon design. It's literally just a bunch of military crap glued together in a big chunk with a dinosaur in it, and its profile is unsurprisingly just kind of an extensive list of guns and bombs it can throw at its opponents. It looks like something a more professional artist was obligated to make out of a preschooler's scribbly drawing. It's nonsense.

Everything I just said is a compliment. It's not nearly as cool as Tankmon was and it's also not as cool as Sealsdramon, but it has such a silly appeal to it. 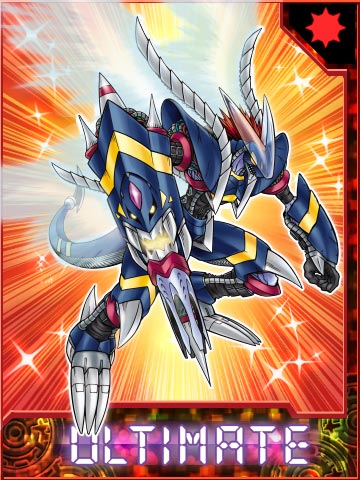 This is another of those digimon whose official art has too many pale, glowy pieces I really can't be bothered to edit into a transparent PNG, sorry. You know I don't like this thing as much as anything it could evolve from, but as far as Ultimate-level multicolored robot knight dinosaur guys go, it's one of the better looking ones, mostly for how cool its head design is. Maybe if the rest of it came in nicer colors I would like it more?

It apparently represents a Tankdramon who had to be reconfigured after it lost a fight with an enemy codenamed "BAN-TYO," which is obviously Bancholeomon. This guy used to be a dinosaur in a tank and was taken out by a Japanese high school delinquent. No wonder he was so easily corrupted by "dark matter" into this thingy, that would screw anybody up in the head. 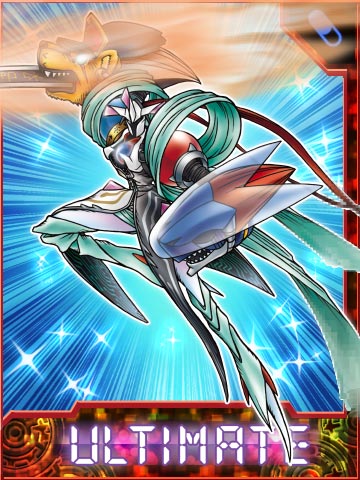 So what happens when Darkdramon fuses together with its own arch-nemesis?? Apparently, under normal circumstances, a fusion digimon merges all of its component digicores into one, but sometimes, a fusion ends up with multiple cores that refuse to complete the fusion, and those unstable fusions are always codenamed "Chaosmon" according to this one's profile. I guess that means this should simply be considered a Chaosmon and not the Chaosmon, but it's still the only one we've officially seen at this point.

I want to say that I don't like it because it's another knight guy that loses its monster basis, but one of its arms is a robot dinosaur and its other arm is a lion in a dumb hat, with a giant sword sticking out of its ridiculous mouth. I can't possibly dislike that.

The profile concept also kind of implies that the humanoid knight is just a blank template we get because the component digimon don't want to cooperate and make one new head together, and it's really not even a bad looking knight guy. I like that faceless helmet, I like its weird looking chest and I like its sleek legs. I thought at a glance I would give this one a really low rating, but, it's cool, it has a fun concept, and it looks nice! Plus...... 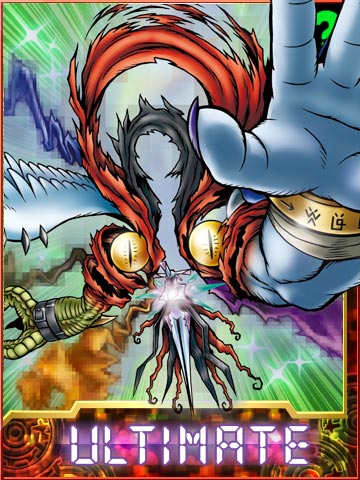 This one's official artwork also holds up very poorly to resizing, but this is a Chaosmon that has further fused with Valdurmon and Sleipmon, and the fact that these components are too powerful and too opposed to one another to form an actual central body is taken to an obvious extreme here that makes for an absolutely preposterous design. It's a digimon with an "empty" center whose digital monster superpowers are all concentrated in its goofy giant arms and wings and I'd love it to death even if its digicores weren't stylized into giant, alien eyeballs hovering in its shoulders, but you know that's by far my favorite detail. The way its tattered, flowing garments outline the torso and head that ought to be there is also cool as hell, though the blank knight-guy body also seems to be there as well, dangling down at the bottom, just kind of chilling out while all these damn arms do whatever it is they do, which I'm sure is just whatever they want to do.