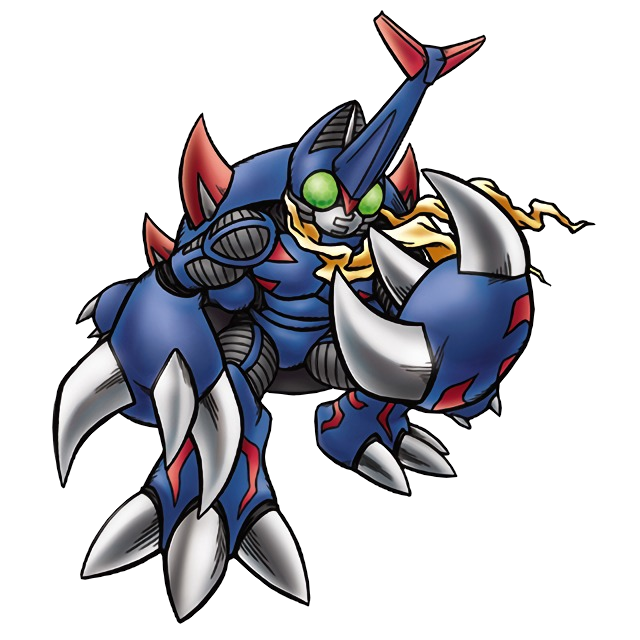 With as slow as these reviews have gotten, it's probably anticlimactic to devote #250 to a relatively obscure child stage, but it's certainly not Kokabuterimon's fault that it was so shafted! It debuted around the same time as our last nine digimon families, clearly intended to be a newer counterpart to Tentomon, but was never featured in the anime or otherwise anywhere near as prominently as the likes of Lalamon or Agumon with gloves or Agumon with a gun.

It's especially sad that this little guy would be so quickly forgotten, because it's just about the only insect digimon to ever share the original Tentomon's uniquely lovable facial features, and even has those lovely H.R. Giger arms and legs to tie it further in with the classic beetle digimon. You would be forgiven for thinking this was, perhaps, a sign of more traditional bug monsters to come, but Kokabuterimon is instead one of the last insect type digimon ever introduced at all, let alone one that actually resembles an arthropod from head to toe.

Said to be incredibly powerful but gentle at heart, Kokabuterimon can obviously evolve into either Kabuterimon or Kuwagamon, but its "intended" evolution is something we reviewed once before, and will be surgically transplanting to this page. Hope you like reruns! 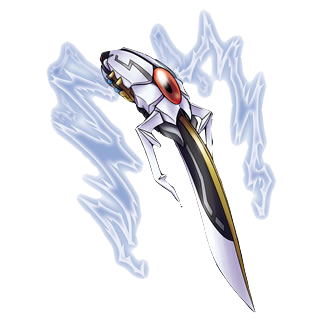 So this "Kuwagamon" variation has yet to be featured outside of the card game and maybe one video game, I think, and that is a travesty. It is officially considered an insect Digimon and a cousin to the beetles, but it's evolved away from almost any resemblance to a living arthropod or even an animal. That sounds like something I should find disappointing, but in this case, it means we get a giant, one-eyed bio-organic sword with long, spindly legs made entirely of electrical bolts, and that is freaking AMAZING. I originally reviewed it as an evolution of Kokuwamon, and it perhaps makes more sense as an evolved form for the metallic, tazer-like beetle, but...it was pretty much created alongside Kokabuterimon, and we're going to put it here. 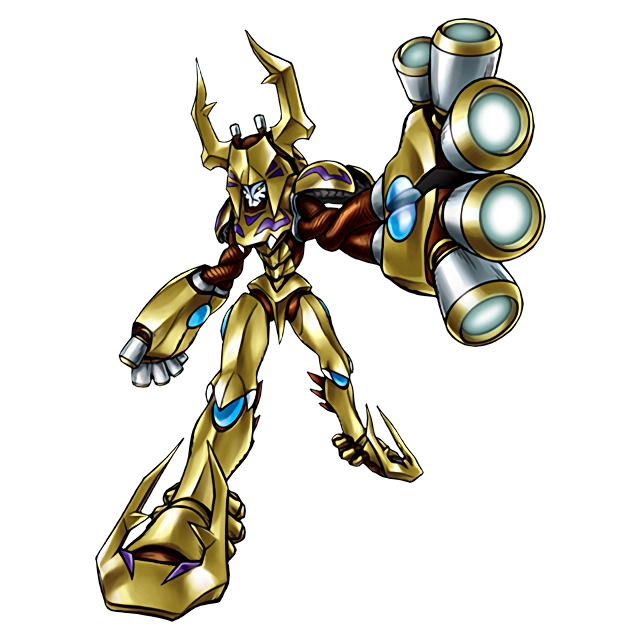 UNFORTUNATELY, this is the only thing known to evolve specifically from Bladekuwagamon, and it's not terrible for one of the robopeople things, I like its cable arms and the tiny human face is actually fairly cool, but...this seriously pales in comparison to what it evolved from. The two should at the very least be swapped around. 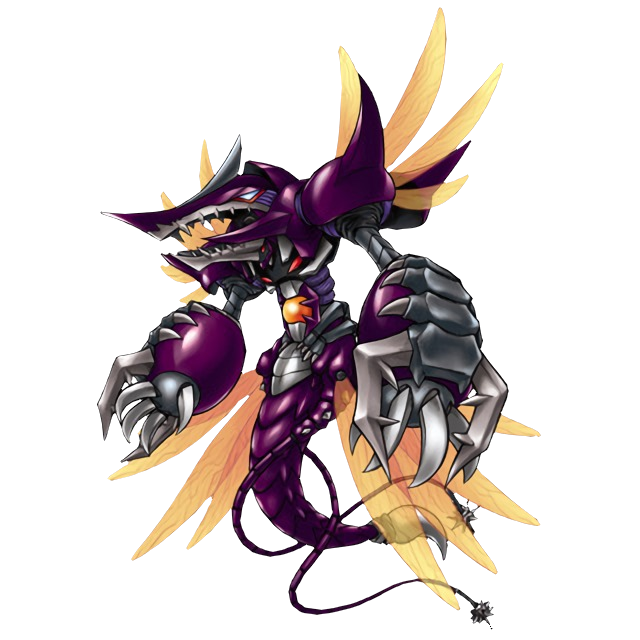 So this one was originally part of our Kabuterimon review, because, well, it's Tyrantkabuterimon. It's in the name! Its lore even says that it evolves specifically from Herculeskabuterimon, which is already an Ultimate stage, but this is one of those newfangled super Ultimate stages.

We transplant it here, however, because it can also evolve straight from Metallife Kuwagamon, and having come out the same year, I guess that was always meant to be its "truest" Perfect stage.

Tyrantkabuterimon is a virus type said to rule over insect Digimon as a fearsome overlord, and that's a pretty big difference from Kokabuterimon, but perhaps that's the whole reason they're connected. From a gentle giant who wouldn't hurt a fly to a warmongering dictator of flies.

As a design, this thing is certainly more interesting than most of the other robot-looking evolutions out there, with its mermaid-like shape and the giant, false jaws on its back, complete with their own additional set of eyes. You can find the real, extra tiny face at the base of the lower horn, too, just like a hercules beetle, but with yet another set of eyes below that, on the chest!

Overall, the line from Kokabuterimon to Tyrantkabuterimon is a somewhat messy one. Messy enough that I originally dumped its Adult, Perfect and Ultimate stages across two other digimon reviews, but all together like this...I think I understand it better. Kokabuterimon is more or less just an all-purpose child-level bug digimon, but the other bugs that debuted with it can be seen as the sweet, bumbly beetle pushing itself harder and harder into a formidable fighter...until it all goes much too far.