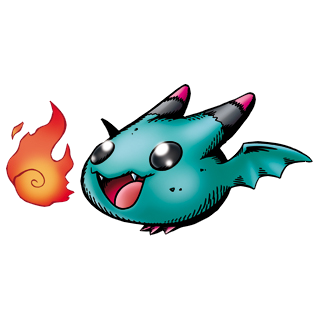 Welcome to the Digimon of 2007! The line we have today was introduced by the Nintendo DS game, Digimon Championship, which was more like an elaborate Vpet with a minimalistic storyline added on.

You know exactly what you're in for with the first baby stage, and of all the little ball-shaped dragon babies I've ever seen, I think this is one of the most charming. It helps that it has such a beautiful shade of teal. 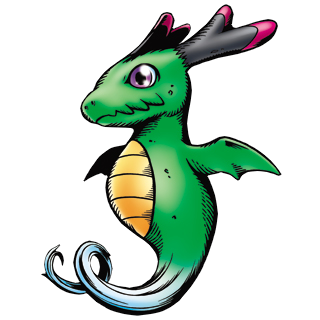 Did they really have no better name for this one? How do you even pronounce it? Like "Baby D Mon" or "Babied Mon?"

Well, it's not as lovable as Petitmon, but, I like how regal and serious it looks, like so many other small reptiles who have no idea how comical they are to us giant mammals. Its bio does mention that it spews an extremely hot gas that can be toxic if it gets into your eyes, though. 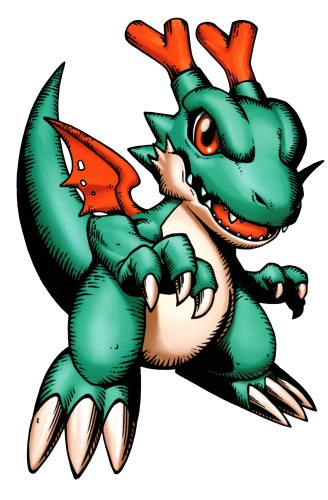 I personally like good old Betamon a very great deal more as the default child stage of dragon digimon, but I understand some people still want a classic-flavor dragon, so I can respect the purpose Dracomon is supposed to serve. It's apparently as "pure" as a child stage dragon digimon can possibly get, and is said to be the ancestral form of all dramon digimon. 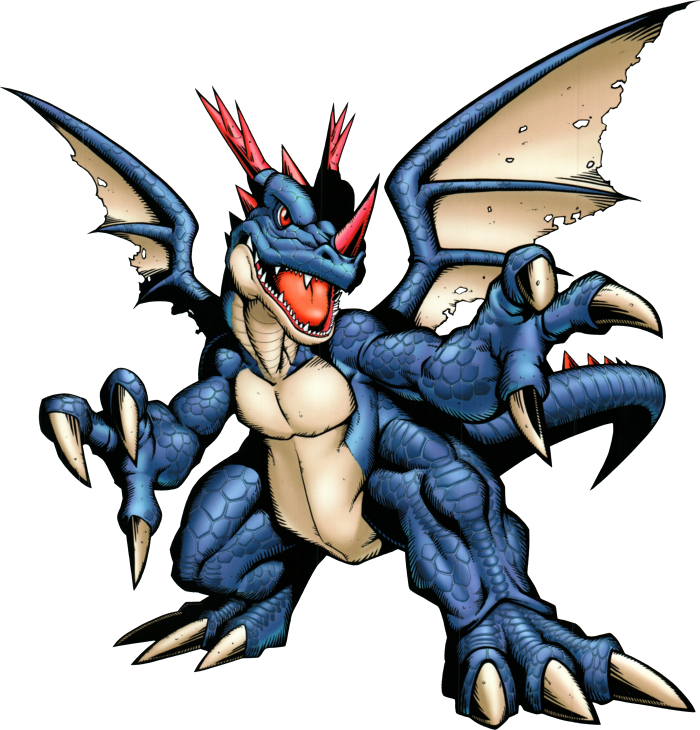 We're just showing the blue Coredramon here, but it also comes in green, which actually does affect its evolutionary course, and you'll notice now that Dracomon is more of a teal shade, between green and blue. That's an interesting idea!

Coredramon is even moreso your classic, full-blooded European dragon, again not as creative and unique as other dragons have been in this series, but a design that feels like it's a very long time coming. Its bio explains to us that all "dramon" digimon have at least some percentage of "dragon data," but this is truly the only digimon whose data is 100% dragon. 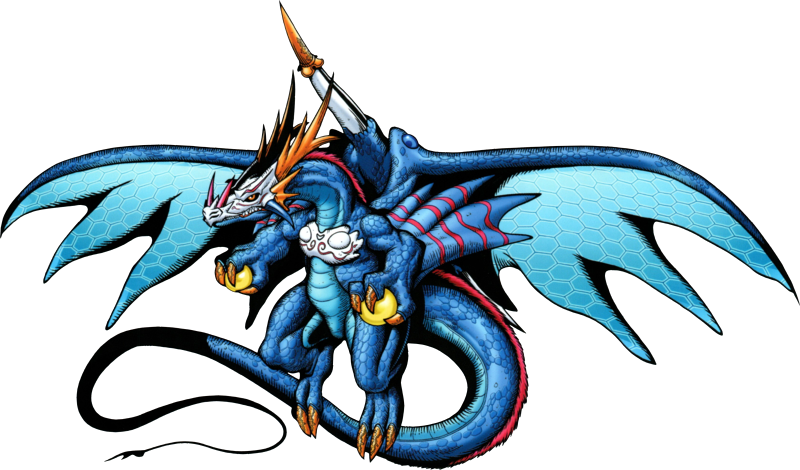 Evolving only from the blue Coredramon, Wingdramon delves more into that good old digimon weirdness with its bony, armored upper head, bizarre alien wings, organic "lance" on its back and the orbs clutched in its hands, which are left unexplained by its bio or attacks. I like how the inner membranes of the wings have a hexagon pattern, too, adding a dash of that "digital" feel to an otherwise organic monster. Those scales are said to "block gravity," so instead of actually flapping its wings, it spends its entire existence floating around. 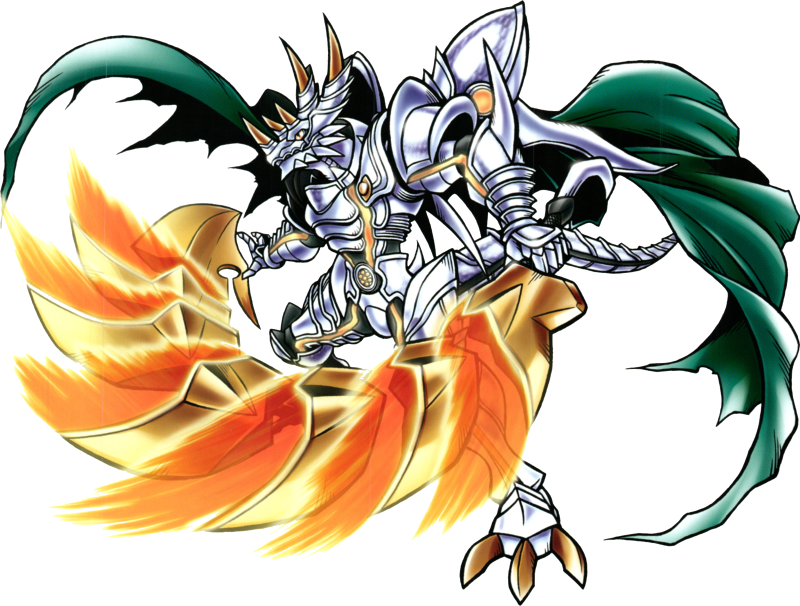 We have seen a great deal of humanoid dragon-themed knights in Digimon by now, and that's really too bad, because otherwise the concept of a European dragon evolving into a knight in shining armor is thematically delightful and monumentally badass. I guess what I'm trying to say is I'd have given this a 5/5 if it was the first of its kind, but the impact of its arrival was unfortunately already diluted by 2007. 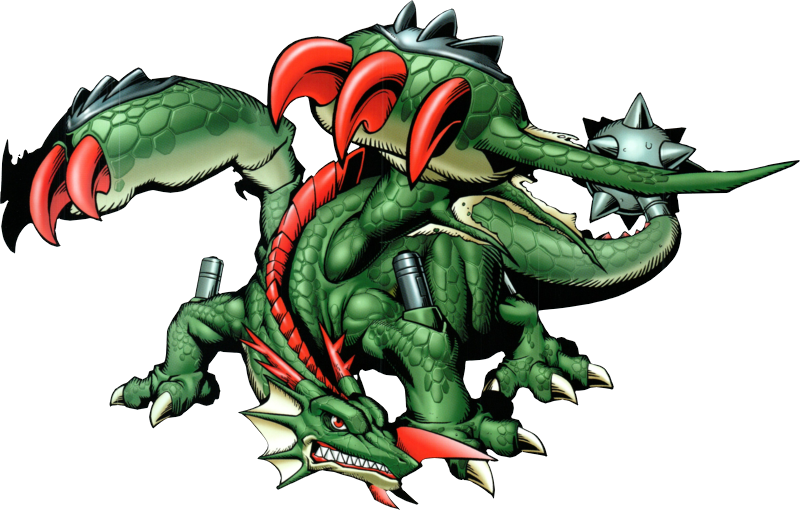 So if you got that green Coredramon, you don't get the flying one; you get the polar opposite, a flightless beast that burrows with the gigantic arms it has on its back.

I appreciate SO hard that those arms are exactly where your more typical dragon has its wings, which would anatomically represent a third set of legs anyway. There's even tattered, vestigial wing membraned hanging off them here! That's such a nice touch!!

The iron mace tail and the metal pistons in the legs are also pretty neat, adding another "artificial" twist we come to expect from many digital monsters, but not as intrusive as that so often ends up being. 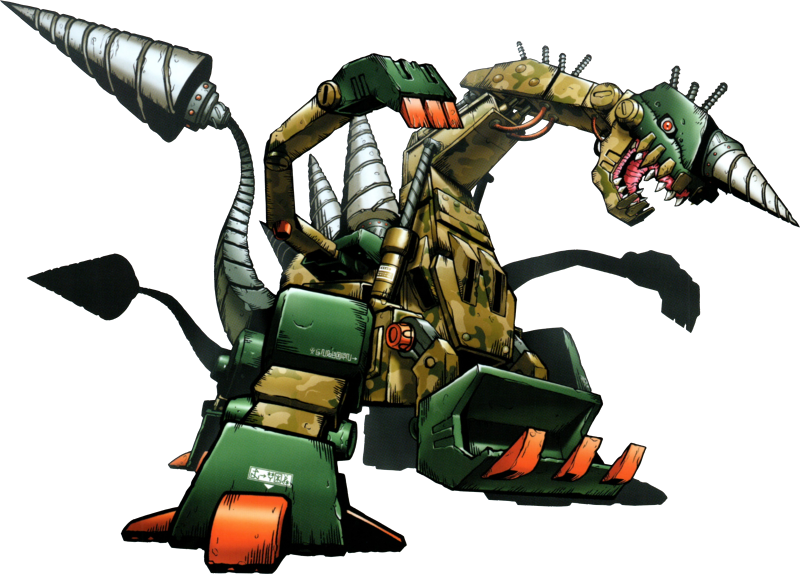 Oh damn, I think this might be one of the coolest looking and most digimony digimon we've seen in a while now! It's almost entirely mechanical except for its eyeballs and the pinkish flesh inside its mouth, but it has that grittier, more monstrous feel you get from some of the earliest machine types.

There's something I always really like about construction equipment monsters, and this one follows nicely from the logic of a ground-based dragon. I also really love any monster whose face reminds me of a narwhal, and everything that makes this beast cool is rendered all the cooler by how dirty and battered it looks, especially the rebar sticking out of its head and neck like bristles and the welded seams intersecting with its eyes!

Breakdramon apparently sacrificed its organic form for pure destructive power, but this also came at the cost of its intelligence and reasoning ability. Neat!!! 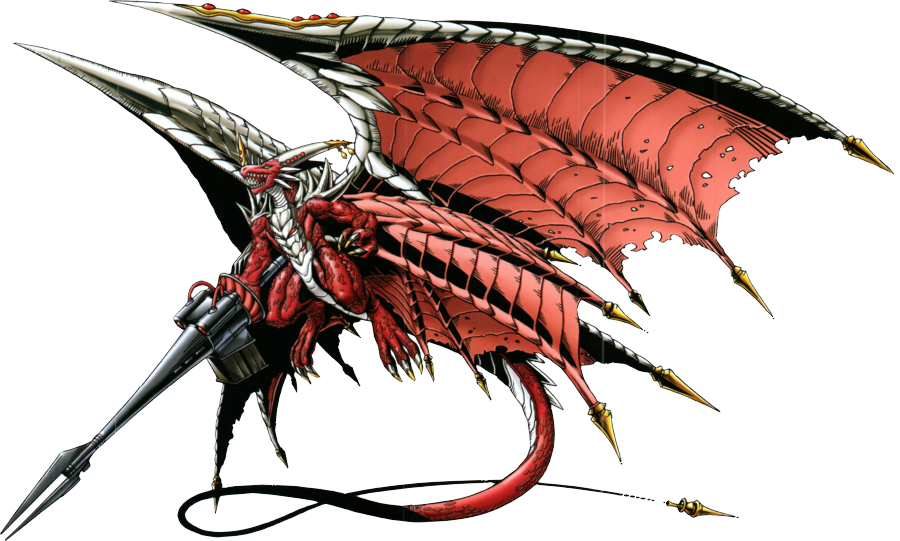 So this digimon is a fusion of both Wingdramon and Breakdramon, and it doesn't really express that in its design to speak of, but it certainly communicates how powerful that combination must be. Not only does it return to being a data digimon, but it's considered one of the "Royal Knights" - one of the least human-like of the bunch - and is said to be the Emperor of all dragon digimon.

Examon's gigantic lance is said to carry shells housing a variety of digital viruses with many different effects, and the metalllic portions of its wings are bizarrely enough sentient, so those little red baubles on them might in fact be their own eyes. The wings are named "Caledfwlch," which is just the Welsh name for Excalibur. Examon also provides a neat little dash of digital-world lore, in that "Examon" refers to an exabyte, or one billion gigabytes, and it's said that this digimon wasn't able to exist until our computer technology grew advanced enough to handle its data size!

I definitely admire just how out-there this all is, and it's a suitable final product to a digimon line that's pretty solid and nicely made from start to finish, mixing some conventional concepts of a dragon with some more creative digimon twists.