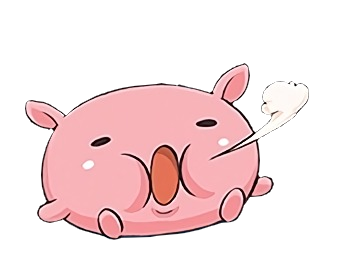 Before we already move on to another whole new "generation" of Digimon, here's a quirky little oddball that appeared only in the "Digimon Twin" virtual pet. In this system, any digimon overfed badly enough will evolve into this weak little pig-blob critter, only to return to normal if it works off the excess energy. Distinct from the "failure" evolutions we've seen before, this digital lifeform has no level, and its only ability - if you can call it that - is that it transforms any other digimon it touches into another burpmon, potentially resulting in a very underwhelming and easily reversible zombie scenario.

Burpmon never appeared again, but it was an interesting idea, and would have been more interesting if it had a proper digimon level and further evolutions. You get things like Numemon and Sukamon when you never clean your digimon, and things like Skullgreymon when you over-train and over-discipline them, so it stands to reason there always should have been some evolutions tied to their feeding habits.