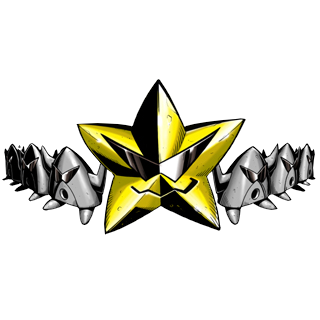 So I've decided to move these little guys to their own review after all, since they're pretty important to Xros Wars and to Shoutmon. How this new "Starmon" relates to the existing, basically humanoid Starmon isn't really clear, since the design is pretty radically different, but the little guy is basically Shoutmon's sidekick and shares his rambunctious enthusiasm, though while Shoutmon wants to be the "king of all digimon," Starmon just wants to be rich and famous.

Starmon also hangs out with a bunch of "pickmon," based around guitar picks, and together they form the Starmon "corps." They don't really fight for themselves, but by linking together, they can become a sword wielded by Shoutmon.

Previously, when I reviewed this "Starmon" on the same page as the original Starmon, I only gave it a 4/5, and I'm not sure why. This is absolutely 5/5 material. 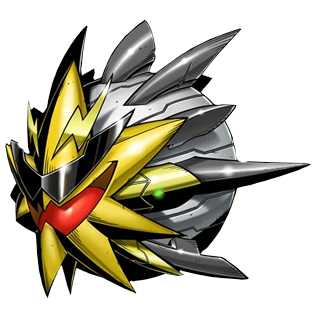 So, we mentioned Fusion kind of did away with evolutions, but we all know this would probably be an Ultimate. When Starmon and his Pickmons ALL fuse into one another, they become this massive rocket-powered artificial comet with Starmon for a face, featuring just once in the manga as their greatest possible attack. That is hilarious. I love it.