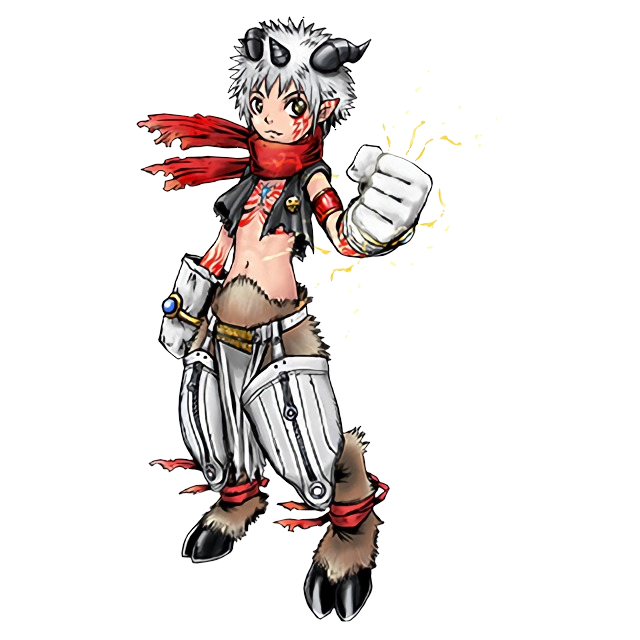 BLEH! Maybe it's because we just had such a high quality streak, but I could not possibly care less about this goat boy. He isn't even as cool as that phrase should entail. I get that he's like the god pan, or something, but even that could have looked more interesting than just putting hooves and horns on a shirtless anime lad. 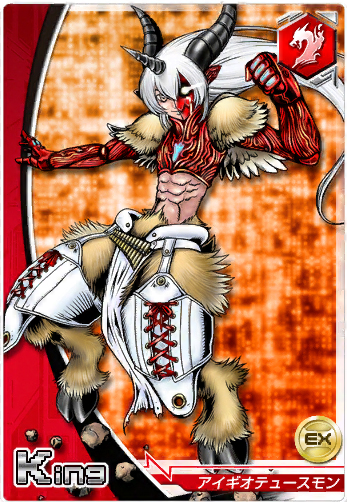 Aegiomon has a sort of Eevee-like gimmick with a bunch of different "Aegiochusmon" forms, and their only really visible, higher-resolution artwork is these collectible cards. Obviously a pretty big improvement as a design, though; the "half skinless" look is downright horrifying on a humanlike digimon, though that's somehow really supposed to be a digital "armor" it incorporated from the data of dragons. Weird! Not bad though. A design that actually stands out. 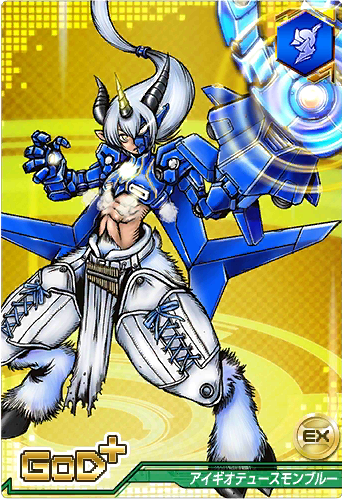 Oh, so that's what we're doing here, I see. This just trades the flayed-looking "dragon armor" for plain cyborg armor taken from machine digimon, and I am no longer impressed. 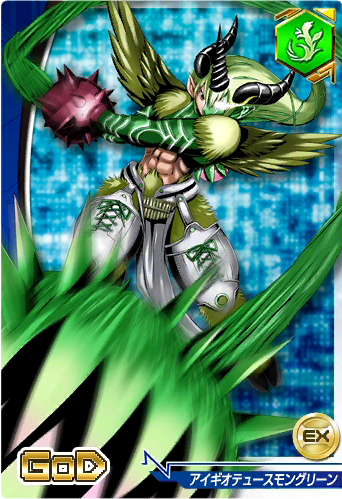 The plant-element one is a little more interesting again, though not by a whole lot. I guess I just like how the arms are big, spiky pink pods with launching bramble tentacles. 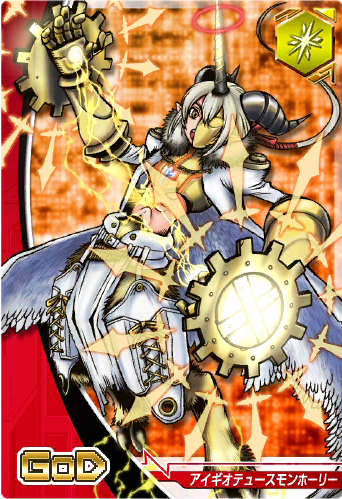 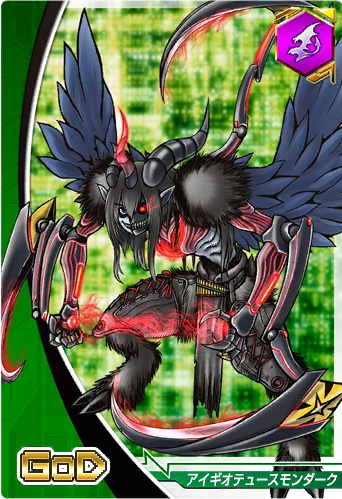 Alright, now you've got my attention again, but when ISN'T the darkk or evil option the best one, especially in Digimon? With its raven wings, single glowing eye, elf ears, cybernetic mantis claws and dirty hair, Dark Aegiochusmon looks like a creepypasta fan character a teenage girl invented to be her fictional boyfriend, the kind of thing the less scrupulous would probably deem "cringeworthy" or "trying too hard," but what I mean is that it comes from a pure, shameless, uninhibited idea of what constitutes a cool aesthetic, and we should all hope to be as confident in our absurdity as Dark Aegiochusmon. 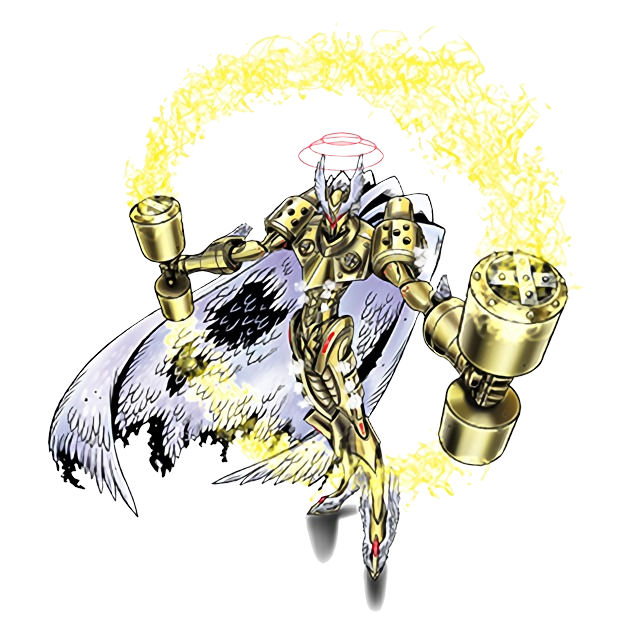 Oh, what? Jupitermon here is a direct evolution of Holy Aegiochusmon? Huh. I was going to give it a separate review page, but it's so forgettable to me, I'm gladd I've got an excuse to roll it into this one. It's almost the last of the Olympos XII digimon, but aesthetically another knight. Aren't there enough knights in Digimon already? The only thing memorable here is the cape that becomes bird wings.

Jupitermon's thing is judging whether other digimon are good or evil, and of course vanquishing those he deems too impure. 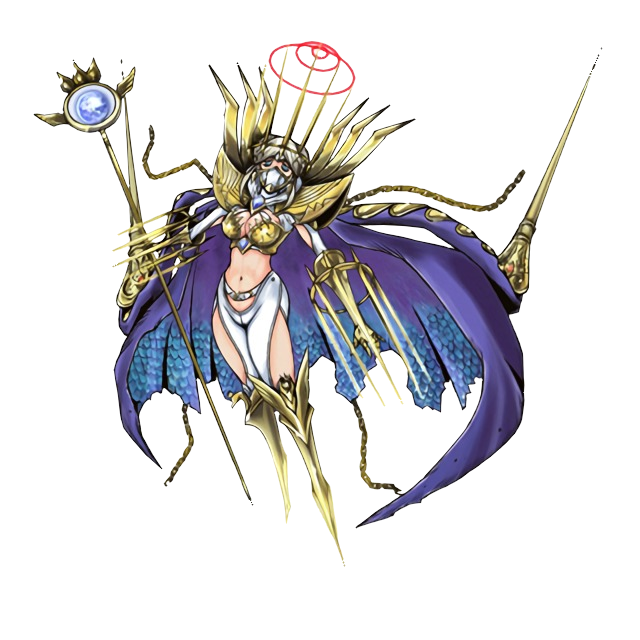 Jupitermon has an equally predictable looking digimon wife, who also has only one cool looking feature, that being the excessively menacing looking crown on her head. We have DEFINITELY passed the point at which the number of half-naked, light skinned female digimon is kind of ridiculous, especially those that haven't even the decency to be satanic in any way...though it bears mentioning that while Jupitermon is a vaccine type, his wife is inexplicably a virus type. 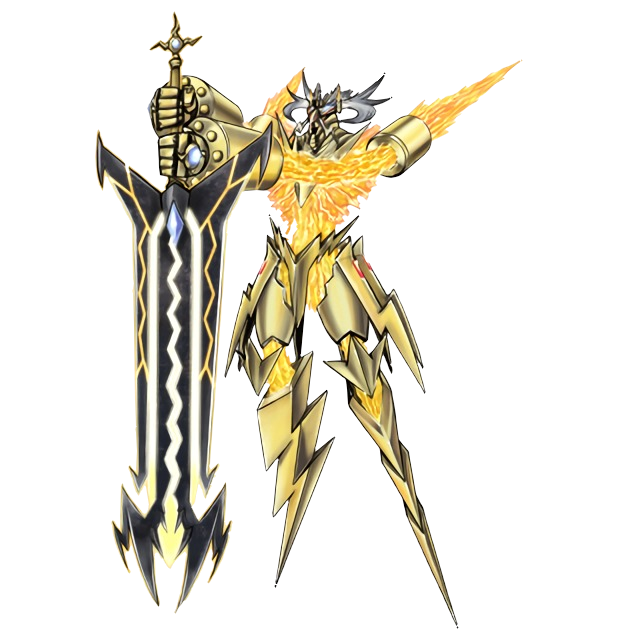 But wait! Jupitermon and Junomon actually have alternate forms! "Wrath Mode" is when Jupitermon gets really serious, I guess, and definitely more distinctive looking. The helmet is much cooler and scarier, and the metal lightning bolt boots are pretty original! He doesn't hold a candle, however, to what his wife can do... 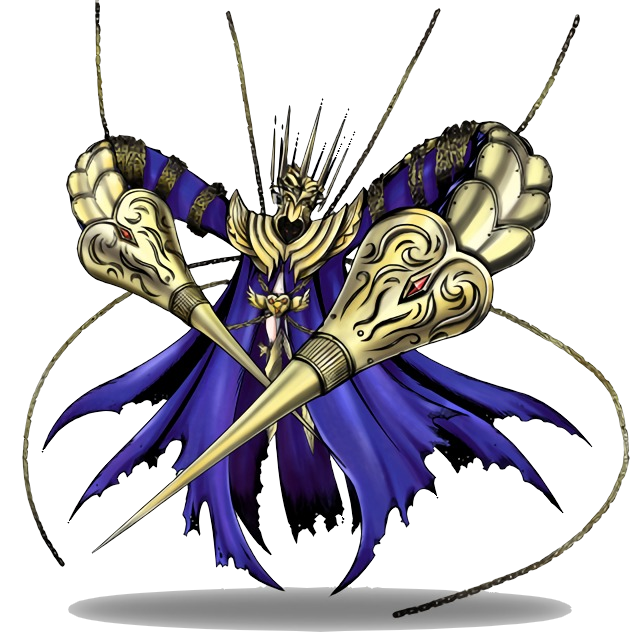 I can't believe I almost missed this?! Holy crap?! Boring, predictably pretty Junomon can turn into this thing?! A floating, creepily masked figure with two huge, terrifying, stinger-like tentacle arms?! What the hell is this design even meant to resemble?! It's apparently a maliciously evil, insatiably violent form Junomon takes when constant battle keeps her beloved husband too occupied for too long, her loneliness and jealousy consuming her until she begins to judge every digimon herself, and judge all of them as evil. She basically takes over Jupitermon's job, but goes completely Judge Dredd on the digital world so she can finally have him to herself again.

I feel like you could read into this one as a little sexist, admittedly, because in case you weren't aware, the very term "hysteria" began as a crackpot medical term for a sort of "female insanity" that doesn't actually exist. The belief, accepted by the medical community for generations, was that the presence of a uterus made a person naturally less rational and more prone to bouts of "madness," with some doctors even claiming that the uterus wandered the body like an independent creature to wreak various forms of havoc on the other organs, and...and... ...Is THAT what this digimon is supposed to look like!?! Literally a giant, killer, armored uterus!?!? Are you serious?! ARE YOU SERIOUS!?

They really did base this thing on the original meaning of "hysteric." And there really is a weird sort of chauvinistic slant to that.

Yet, simultaneously, this has officially become one of the coolest looking things I have ever seen in my life. It's a rampaging, terrifying, battle-armored reproductive system. It's another digimon that feels more like some sort of Persona or Silent Hill boss. It's RIDICULOUS, it's cheesy, it's maybe a little bit insulting, but it's just...so...RAD...

And unlike regular Junomon, they don't play this thing for even a tiny bit of fanservice, unless you get off on gigantic, gold-plated ovaries I guess.