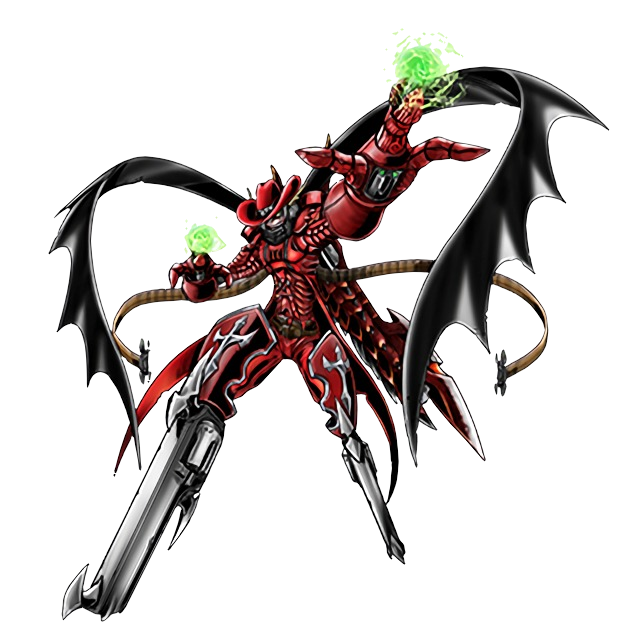 We gotcha a real goofball today! This Ultimate level "dragon man" is technically Magna Kidmon, whose legs from the knee all the way down are just two gigantic six-shooters! It's said to be an egotistical ruffian who will shoot off bullets for just whatever reason or no reason at all, firing in all directions when he gets either angry about losing or excited about winning, which is hilarious. It makes me think he'd absolutely have to do so while dancing from one foot to the other and spouting off a lot of "YEEHAW's."

What's really cute is that, according to his profile, Magna Kidmon tends to mistake Revolmon, AKA Deputymon, as a member of its own species and just immediately assumes they've already got a friendship. The two look almost nothing alike except for the presence of a cowboy hat and giant revolvers, so we must surmise that one or both of these things are literally the only thing Kidmon cares about as an identifying feature. It's not that unbelievable; an ant can be fooled by a snail or a weevil that just smells enough like another ant. Who knows how the mind of a digimon really works, so what's obvious to us humans might be meaningless to a digital monster and vice versa.

Of Magna Kidmon's various attacks, the most outlandish is called "Bind Red Trigger." Apparently, those things on the ends of its two whiplike bullet magazines are themselves "tiny machine guns," and this attack entails "stabbing" the machineguns into the opponents body before opening fire and obliterating them from the inside. I also don't normally talk about palette swaps here, but there's also an "Avenge Kidmon," which has a really interesting idea behind it: it's an evolutionary form taken by just any old digimon if it gets defeated by a Magna Kidmon and consumed by a vengeful rage! Unfortunately, the fact that it evolved into a palette-swapped Kidmon makes Avenge Kidmon even angrier, driving it too bonkers to actually pursue its revenge plan.