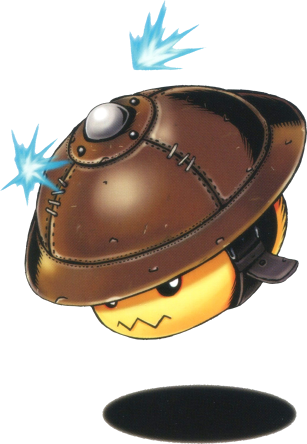 If you're keeping up with these reviews "live," sorry for going silent for a week or so! I actually have the remaining digimon already written, like I mentioned, but I think I really will take a detour for a while to talk about Appmon through September, and save the final batch for October for some very good reasons! DIABOLICAL reasons!

Anyway, we've got another digimon line today that disappoints me greatly, but we'll get to that in a moment. First, we've got the baby stage, a digimon born wearing a leather hat. Not much is said about the little puff of a creature itself, just that its hat sadly offers very little real protection, and its only attack is to "poke" at opponents with the hat's soft brim. 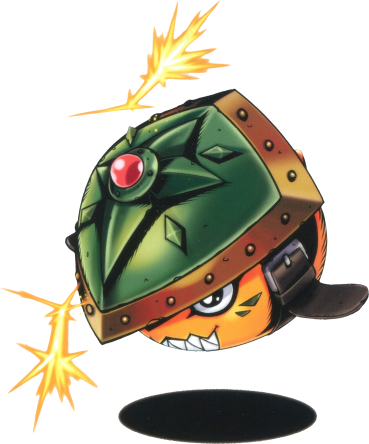 Now outfitted with a copper shield, this cooler looking baby stage is now said to be absolutely fearless, though its shield still isn't as strong as it looks. 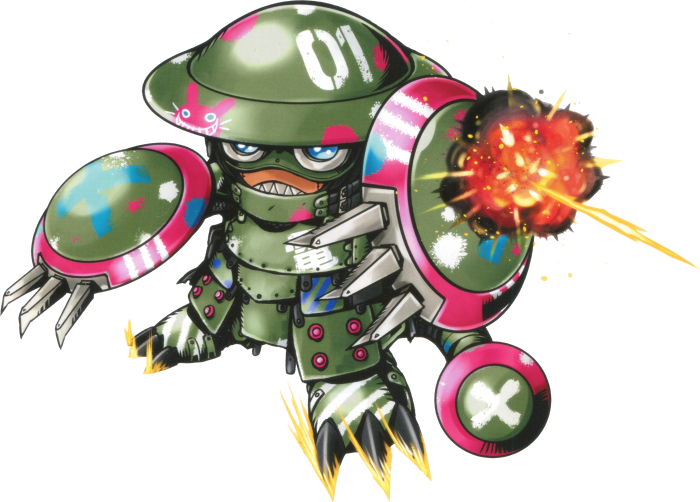 And here he is, one of the single best looking child digimon released in years. Just look at him! How can you not love this weird little fella decked out in all that great looking armor, in turn so splattered with paintball marks and graffiti? There's just so much personality put into this one, and it's another of the "legend arms" digimon, obviously transforming into a shield rather than an offensive weapon.

For once, we also know what an armored digimon looks like underneath its suit, and it actually isn't a bad design either: Adorable, in fact! Who doesn't love almost every single stitched-up plush doll looking Digimon? I don't know if it's supposed to evoke a bear or some kind of little lion guy or no particular animal, but I'm loving the spooky round eyes, sharp teeth, and scruffy pink hair. I'm also loving the idea of a plush creature wearing metal armor to compensate for its squishiness!

But, you can probably surmise from my words earlier that it's all downhill from here. 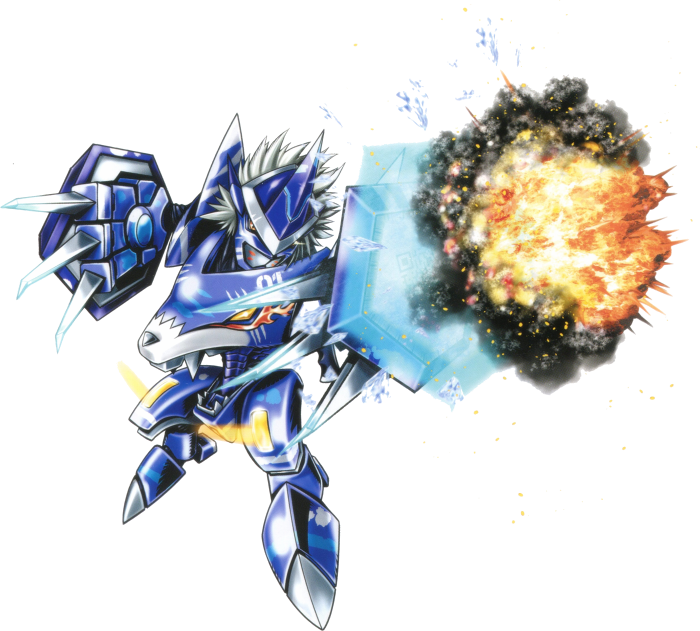 Come on, what the hell guys?! How is THIS an evolution of Ludomon!? I get it still has the armor theme and all, but what happened to literally any of its personality?! Now it's an ice wolf?! The entire line should have been the "badass armor over a gothic stuffed animal" motif. I know we don't necessarily know for sure there ISN'T a hot topic plush underneath Tia Ludomon, but that's just it: we should know that. That should be what it is and we should be able to tell because it's fun and cool and it would be something different from the ten million other armored digimon out there. 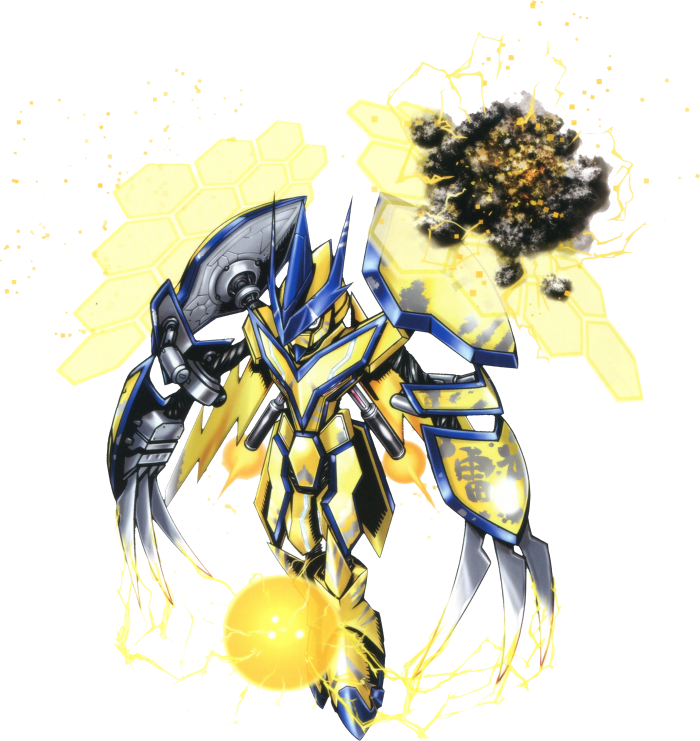 From an ice wolf to an electric duder, I guess the main gimmick of these evolutions is that their battle element completely changes. That's interesting, but not interesting enough to save the drop in character. Raiji gets a few extra points for just kinda looking a little cute, for what it is. 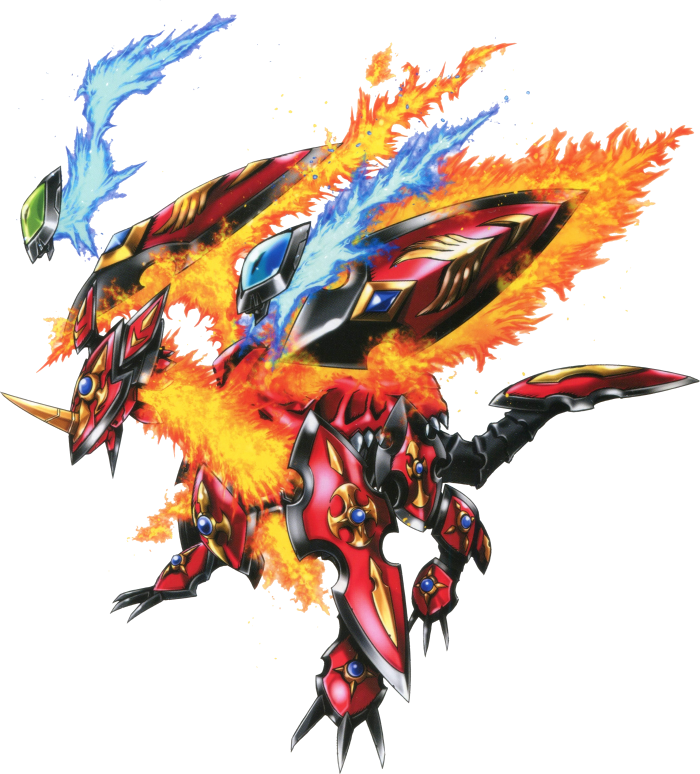 If you've been reading these reviews, you probably knew at a glance that I'd be particularly let down by our final stage, almost everything I find tiring about over-designed, metallic, elemental dragon beasts. The only thing cool here is that Bryweludramon (what an awkward mouthful...) is eyeless, but it sees through those two things that look like burning foxes with reptilian eyeball heads, who have their own intelligence and are named "Gause" and "Fay." Still not half as cool as Ludomon, though. The OTHER cool thing, which I missed at first but earns it another point, is that its torso is a backwards dinosaur skull. 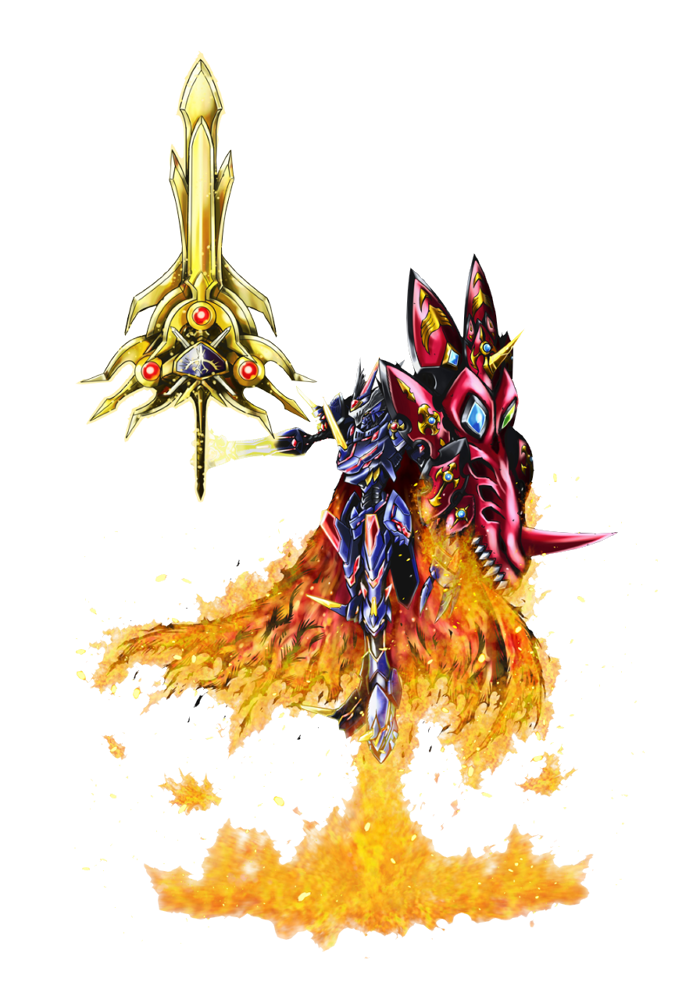 Another thing I missed for a few days into this update, this is the fusion form between Bryweludramon and the recent Durandamon, as the lines represent a shield and a sword respectively. It's another design I could kind of take or leave, but what IS fun is that the sword and shield here are separate entities with the appropriate personalities and memories of their respective digimon, which are never actually, physically held by the main body but orbit near it and spread out to coordinate battles as a team of three.

With this, I've decided to give the Digimon reviews a four-week break, to return in October. Why? Because, skipping over the Appmon, we're about to review the very last, very most recent digimon ever released...almost entirely consisting of new X-antibody digimon, and REALLY entirely consisting of dark, demonic digimon! The perfect way to end these reviews in October!