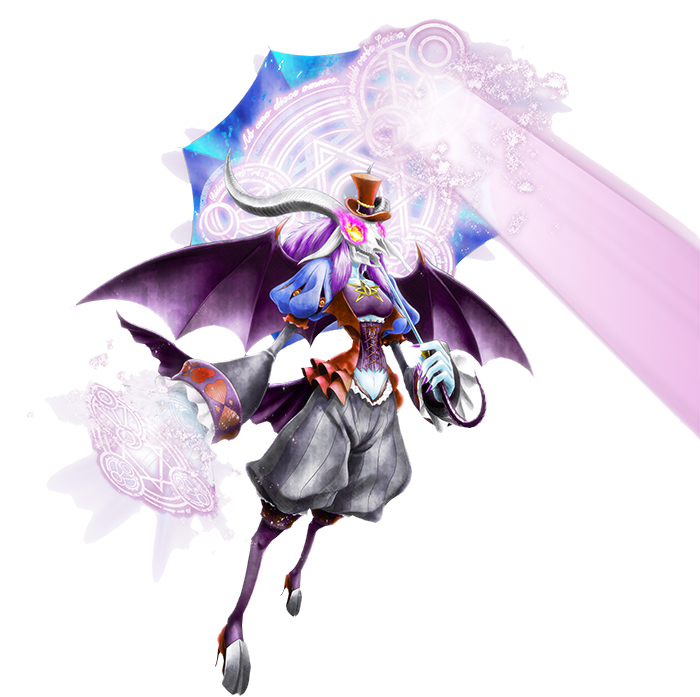 Oh. My. God. I. LOVE. This Digimon. I can't believe this even is a Digimon. They've really gone all-out giving a lot of these new X forms their own distinct artistic feel, and this is another of those digimon that reminds me of some over-the-top fan character in the best possible way.

Yes, it's a goth baphomet with a tiny hat, a magical umbrella, a purple corset, a flaming skull head and stiletto HOOVES, and yes, everything about that recalls the kind of steampunk circus goth motifs everybody's rolled their eyes at ever since Tim Burton's Alice in Wonderland was inexplicably well received, but I am way too old to care about your arbitrary definitions of what's sincerely cool, ironically cool, and "cringe" anymore. Arguably I'm also too old to be ranking Digimon: Digital Monsters for almost exactly an entire year's worth of posts, but you've already failed to stop me. I've already WON.

What I'm trying to say is, I fucking love Digimon's new Disney Goth Mary Poppins Satan. And so should you. And I haven't said "fuck" or "fucking" a whole lot in my digimon reviews, no, but I think it's also clear at this point that Digimon isn't really marketed towards young children quite like pokemon is, so, Fuck yes!!! Fuckin DIGIMON, man!!! Am I fuckin RIGHT!?!?