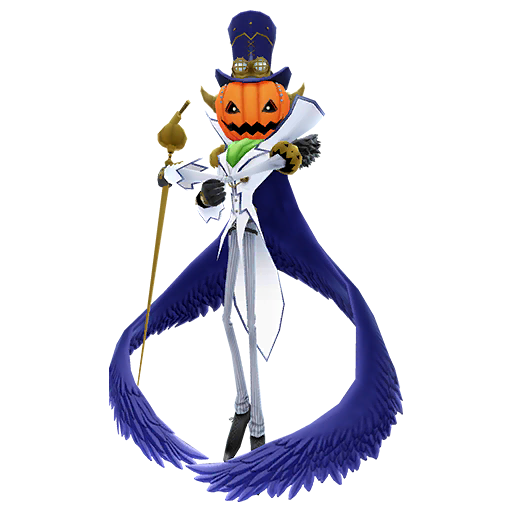 Hey fair warning we're still cussing here so HAPPY MOTHER FFFUUUUUUCKIN HALLOWEEN! THIS REVIEW WAS ABLE TO ACTUALLY GO UP ON AN OCTOBER 31ST! THIS DIGIMON CAME OUT IN AN OCTOBER!!!!! Debuting in 2019's Digimon ReArise RPG is a brand new Ultimate level digimon designed especially to evolve from one of the goodest greatest little most alive and safe men of all of the digimen there ever were, an Ultimate I'd have been dying for back when I was 13 and considered Pumpkinmon the then highest-evolved digimon I liked the most. That status would eventually be taken over by Parasimon, but obviously the pumpkin is still dear to me for a lot of reasons and it is!!! EXCITING!!!!!! That he at long last has a "true" or "proper" evolution!!!!

It's so exciting, I don't even care that much that it kind of loses some spookiness as it evolves, notably losing any stitchy or tattery qualities as well as the axe in its head. That's okay! It's okay because I feel like this is exactly the kind of thing Pumpkinmon himself would have wanted, get me??? Like if we're just judging by the Pumpkinmon we were the most familiar with, he's always had an inflated view of himself and goes around hitting on girls and trying to be the life of every party but he's also stuck being this childish, raggedy little rotten goblin man that nobody takes seriously.

Look at every element of this form. It's like a ripoff Jack Skellington in a white tux with a MASSIVE collar, it has flowing raven wings, it has devil horns and it has a gaudy nonsense "steampunk" top hat. It is exactly, EXACTLY, the evolution Pumpkinmon would have himself designed. It is everything he thinks he is in his heart, everything someone with his kind of attitude sincerely considers suave and badass.

Noble Pumpkinmon's staff, the "Assam Ring Jack," doesn't have any combat abilities but has the power to "make wonderful pumpkin dishes to treat newly befriended Digimon." When he does need to fight, he can create a giant pumpkin bomb named "Trick or Treat Wallace," which is actually named after "1068 Wallace," a record-breaking "Atlantic Giant" pumpkin whose seeds can sell for over $800 and produce gourds that grow up to a thousand pounds! The cultivar also lends its name to this digimon's other attack, "Atlantic Dam," which, uh, apparently fills the enemy's body with enough pumpkin soup to make them explode. Brutal.

The best thing about this digimon however, or perhaps the most heart-wrenching, is the personality described in its official bio.

"Neither good nor evil," Noble Pumpkinmon is a perfectly neutral being whose friendly but mischievous nature makes him popular with everyone he meets, and his only goal is that he "aims to bring smiles to all Digimon."

I almost feel like I need a minute here. Think about Pumpkinmon from Digimon Adventure and how all he wanted to do was have fun and make friends wherever he went. Now think about the fact that this evolution was allegedly waiting for him all along, or that, perhaps, his will managed to trickle through the digital universe to generate it for the rest of his kind. Go on, let it all out.

At the time of this writing, another batch of X-evolutions have dropped, albeit mostly for digimon that aren't quite my style, and there are still some miscellaneous digimon here and there that I haven't covered. However, we have officially reviewed enough of them that we are "caught up" to a point where we will never again be able to make this a daily feature for the long-term. Instead, it's going to make a lot more sense to just dust these off every six months to a year, if that, to round up whatever interesting digimon have been revealed in the meantime.

Until I feel it's a good time to do that, there simply can't be a higher note for me to end these on than this Halloween's X-forms and Noble Pumpkinmon, the flawless bow I get to put on a long and arduous review project for what was actually also my 36th birthday. Is that a little old to have spent the better part of almost two years reviewing Digital Monsters one by one? Maybe, but, I guess I'm no more ready to grow up and get serious than Pumpkinmon is, either. I relate to wishing I was a dapper haunted vegetable monster, and especially one who might just go around making people happy for the heck of it.

I hope these reviews have achieved that for at least a couple of you. Look I don't know why I find baby songs about Halloween so funny but I do, alright. Maybe they're also legitimate bops alright.