...I mean, okay, Digimon didn't really "go anywhere," but it's been over a year and a half since I reviewed a bunch of spooky new X-antibody Digimon and finally Noble Pumpkinmon, a bright note to end on after months worth of Digimon I found samey and underwhelming.

I had not the slightest inkling what might be next for the Digimon franchise, except that I was sure those last few reviews would probably be an unusual high point for modern digidesigns; that it would be right back to the dinosaur-headed gundams and endless parade of Angewomon knockoffs.

And I turned out to be so, so wrong.

So wrong, in fact, that I have actually not been this excited about Digimon designs since I was thirteen years old. So wrong that for the first time in literally twenty years, Digimon exist that I like more, yeah, MORE than my "first gen" favorites, including one that has actually dropped the very day this review is going up, April 4th, 2021, and I am going to be saving it for the end of this review period. You'll be seeing it in roughly 20-some more reviews, so we're having almost a full month's worth of only top-tier new Digimon. While the last batch of Pokemon were, unfortunately, a new low for my interest in the series, the Digimon to come are an all-time high for my love of not just Digimon, but the mons genre as a whole.

While I would typically start with a "least" favorite and steadily build up to the top, I would like to start this batch off with one of the new superstars right away... 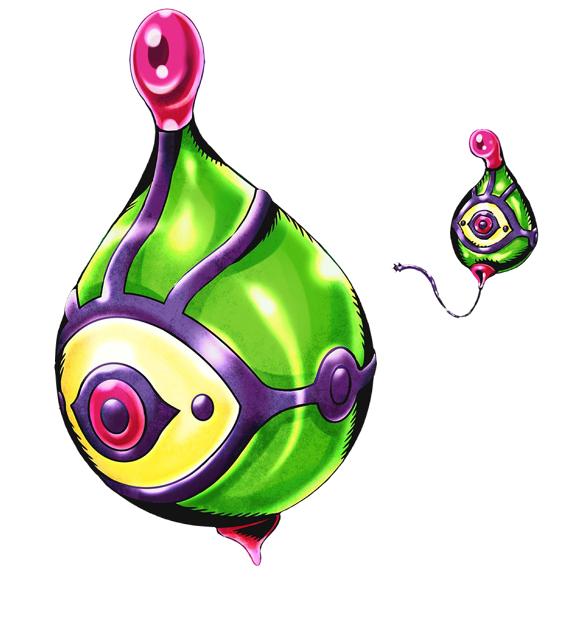 So admittedly, I haven't gotten into that reboot of Digimon Adventure - what I've seen just doesn't grab me like the writing of the original - but it's been a vehicle for many of the Digimon debuting in the new Pendulum Z v-pets, and for these the creators saw fit to give Algomon a complete set of prevolutions! You may recall that Algomon is a fearsome and mysterious abomination of digital evolution, but in the Nightmare Soldiers Z virtual pet, it's actually the default, starter baby stage you boot up with....and what a beautiful, beautiful baby it is!

Algomon's original gimmick was having lots of freaky eyes and worm-like, infectious tendrils, so its baby form, naturally, starts as just one eye with one tendril...but what appears to be one large, eerie eyeball is actually just an elaborate eyespot, while the real eye is that adorable little snail-like one on top!!

This digimon has a very "parasitic" appearance indeed, rather reminiscent of a protozoan with a flagellum and a large nucleus. Everything about it is so "me" it almost hurts, but it's about to get much more me. SO much more me. How me can it be?! 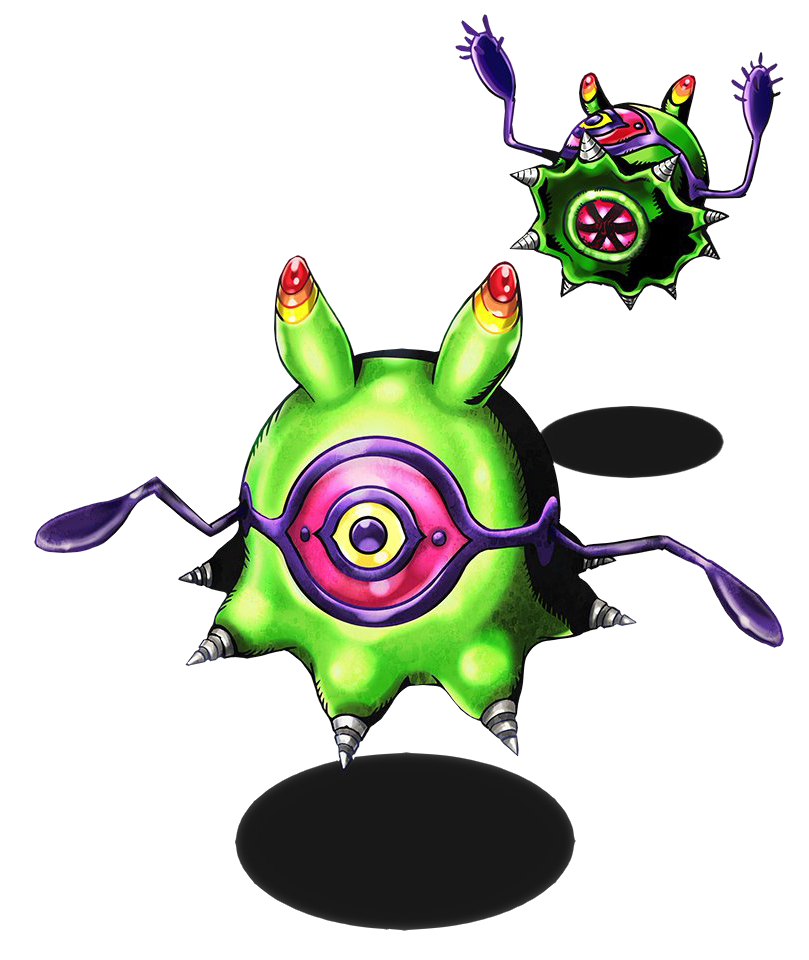 No way. NO WAY. For real!? REALLY!?! REALLY. They did it. The crazy bastards, they did it. One of my favorite animals in the world. One of my favorite animals in the world but not at all an animal I ever expected would show up this prominently in such a mainstream franchise. But it did. Regular visitors to this website may have recognized it immediately, but just in case, here's one of the clearest-ever photos of this godly creation, this precious child of the Earth, Leucochloridium paradoxum:

It feels like I say this every day of my life at some point, but Leucochloridium is a variety of flatworm whose pulsating "brood sacs" transform the tentacles of its gastropod host into a facsimile of insect larvae in order to attract the attention of flying dinosaurs.

With a set of false maggots stuffed into its eye stalks, the snail can no longer tell the difference between day and night, and wanders out into bright sunlight where hungry birds of every sort can easily spot those tasty, vulnerable "grubs." Completing its life cycle in the bird's digestive system, the parasite's eggs are spread far and wide by the host's droppings - a tasty treat to the next unsuspecting snail in the cycle!

Fun fact, we now know that the brood sacs don't just hang around in the snail until a bird comes by, but may sometimes break free and crawl around on their own!

The snail and the parasite both grow back to do that all again. :)

Algomon already had an "eyeball" and "infection" theme, so this imagery is just a no-brainer! There may be other parasites that infest eyes throughout Mother Nature's majestic handiwork, but only Leucochloridium makes the host's eyes into the very vehicle of infection. This must be the first time any baby stage has entered my personal top ten Digimon designs, though not without the obvious disappointment of it being a baby stage alone. We sadly already know that Algomon's final two stages will be dropping this imagery...but, all is not lost! 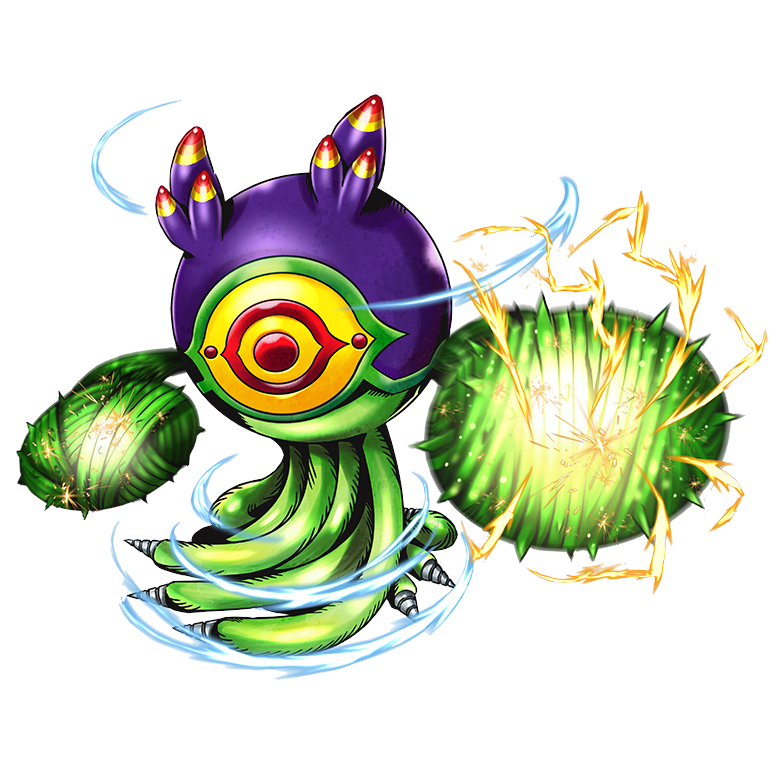 The motif does remain for the new child-level stage, and okay, I don't like this spherical form quite as much as its gooier, more gumdrop-shaped predecessor, but all the same elements are still technically there, and a child stage Digimon with parasitic broodsac eyes is more than I ever could have honestly hoped for. The vpets and video games may push for you to reach that "final" evolutionary form, yes, but it's a tradition of the various anime and manga that your main "partner" Digimon spends MOST of its time in its conveniently portable child stage, evolving only long enough to do battle.

Obviously there have been many child Digimon that I've liked quite a bit and reviewed favorably, but somehow, there has never been one that felt truly appropriate to be my own hypothetical "partner." The closest one I could ever think of was Chuumon, and Chuumon is only somtimes even treated as its own Digimon at all!

There's really no way around it. Even if I liked some other design more, even if I liked its own baby stage more, this is undeniably the only one for me. The child stage is ostensibly that deeply special Digimon destined to fight by your side until the bitter end, learning and growing right along with its human counterpart, saving both our worlds from apocalyptic doom. It's a coveted position shared by the likes of such beloved heroes as Gabumon and Patamon.

And now there's an option with parasitic worms for eyes. 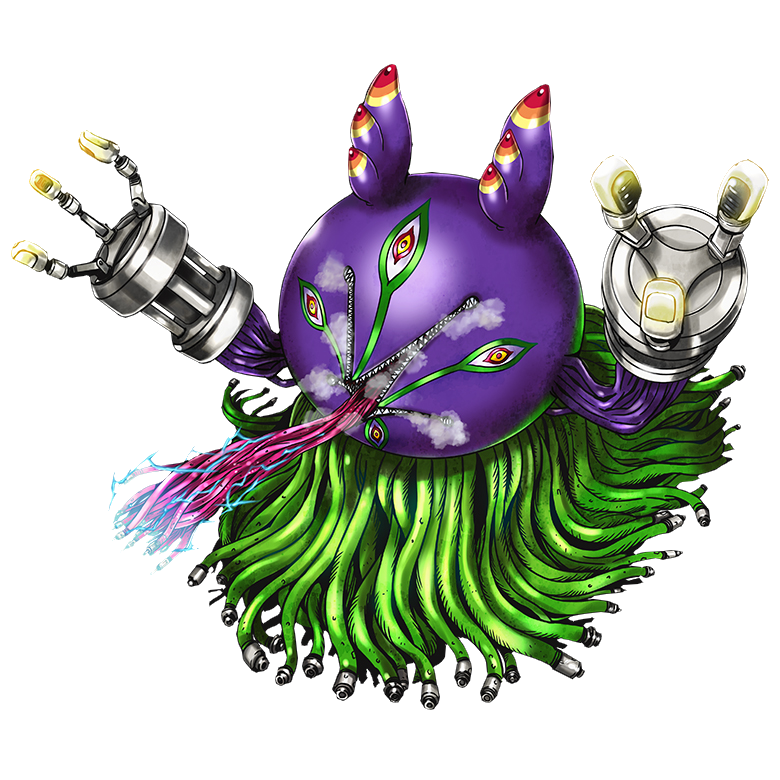 So, nicely enough, the new "Adult" level stage STILL just builds on the baby stage. I once again like it just a little bit less than its predecessor, I'm afraid, as I still think the body would look better if it weren't a smooth orb, and the cyborg arms also kind of come out of nowhere. However, it now acquires even more brood sac eyes as well as even more false eyespots, encircling a wickedly toothy, radial mouth that curls open like a ring of flower petals - by far one of my favorite things for a mouth to do. It doesn't dethrone my existing favorite Adult stages, but I'm really glad it exists. 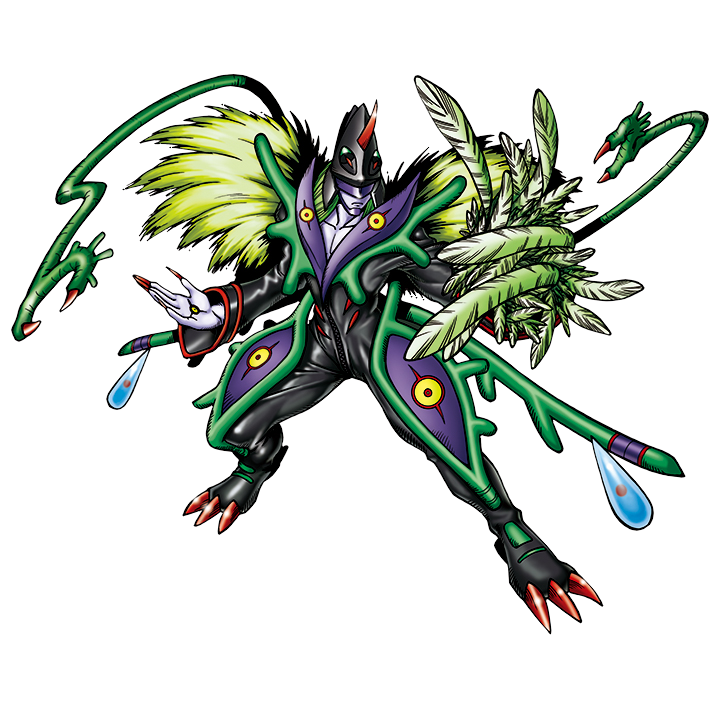 So, the new stages do make the "original" Algomon feel a little more underwhelming - basically a guy in a really weird looking costume - but as a concept, it acquires a downright fascinating new level of symbolism.

Algomon is named for "Algorithm," but it's also a play on Argos, the hundred-eyed Greek giant, which would be written and pronounced the same as "algos" in Japanese. When Argos was slain, Hera honored his memory by giving his many eyes to the tail feathers of the peacock, and that's probably why Algomon's design incorporates some subtle bird-like motifs, and in some illustrations, a clump of feathers pouring from its sleeve.

Obviously, a connection to Leucochloridium was not intended back when they introduced this Digimon, but I am inclined to wonder if that connection wasn't chosen in part because, you know, it's a parasite that hangs out in its hosts eyes and entices birds to eat them. It indeed "gives eyes" to a bird, which becomes its new vessel. That can't just be a happy accident here, can it?!

I did say I haven't been keeping up with that new anime, so thanks NeroIntruder for letting me know that in this series, perfect-level Algomon appears strictly in its "worm phase" form and actually drops the human head, leaving only the more insectoid upper "mask" atop a mountain of parasitic vines and giant, false eyes! 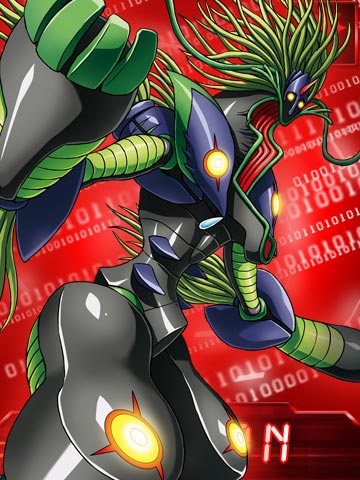 This leaves only the Ultimate stage as the odd one out. It has a uniquely strange design for a humanoid, with a gaping upper cavity canonically filled with more eyes, but its visual themes now feel sort of "orphaned" in a way, tying slightly less into the rest of the line than the stage just before it. I never thought I'd have slightly more appreciation for its MORE humanlike form, but yeah, actually! Wild! It's still a suitably monstrous being that I could accept as my Algomon's ultimate if I had to, but, we all know there's already a whole other ultimate out there that combines eyeballs and green tentacles with a much more overt parasitism angle - it being right in the name and whatnot - which ironically makes it a much more appropriate outcome for this line than the climax it was actually built around.

So, the next few weeks of Digimon reviews are off to QUITE a start. From here, we're going to catch up on a couple of additional X-antibody forms that came out in the interim, then get into more of these Pendulum Z additions, and I'm SO enthusiastic about SO many of them that it almost hurts to trickle them out one day at a time!!