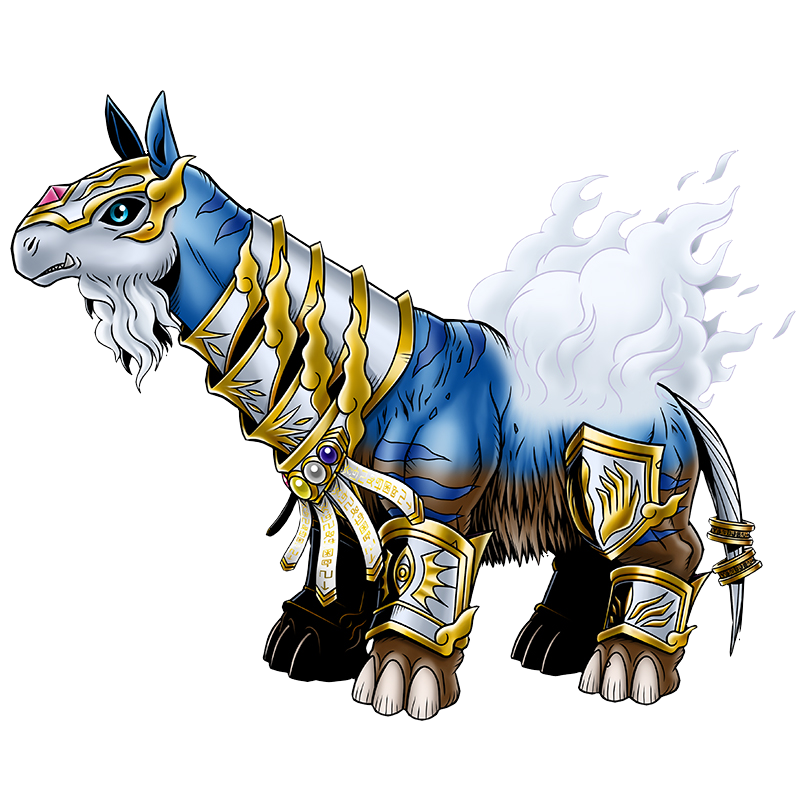 So this might not seem all that remarkable at first glance, perhaps, but there are two very neat things about this Digimon! First off, the undead SKULLbaluchimon entered canon almost two decades ago, so only now are we learning what a normal, non-skull Baluchimon looks like...though it, uh, doesn't quite follow the same anatomical plan.

These are Digital entities, so of course they don't actually have to make any biological sense. Besides that, "Skullbaluchimon" is said to have been born from the data of a hoaxed fossil skeleton. In real life, Baluchitherium is a massive Oligocene mammal whose complete skeleton has never been found, and you may know that centuries ago, any fossil pieces people did find were assumed to be chunks of dragons, cyclopses and other monstrosities, so it makes sense that Skullbaluchi looks like a nonsensical hodgepodge of parts.

The very name "Baluchitherium" has since been retired, sort of, as new discoveries have shuffled and consolidated different species in the same group, but we now know it was a mammal built very much like long-necked dinosaurs. So "Baluchimon" is a more accurate beast, and it's cool to have a Digimon based on ancient megafauna beyond the obvious woolly mammoths and smilodons. Prehistoric beasts more peripheral to our culture are pretty much always welcome, in all media appearances, and I will fossilize on that hill myself.

Baluchimon's lore is pretty simple; it's a holy beast Adult level digimon, and said to protect the ruins of an Angel digimon temple. The design is pretty much the real animal as we believe it looked, but with the gold and silver armor typical of many angelic mons, and a flame-shaped cloud of white vapor coming off its flanks where you might imagine angelic wings could be. If it had existed before its "skull" counterpart it may have gotten a much simpler review, maybe with an "oh, neat, that's a real ancient mammal" out of me, but I really like how we got the highly inaccurate version first as a skeletal demon.

Skullbaluchimon, however, is one higher evolution level than regular Baluchimon, so this beast can technically evolve into its darker misrepresentation.