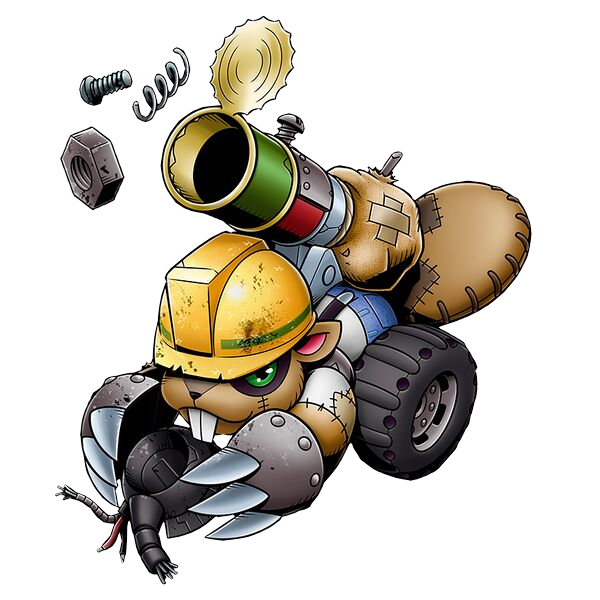 A bit out of left field, I gotta say! Junkmon is one of the child-level options for the Metal Empire Pendulum Z, and resembles a patchwork plush beaver with metal claws, tires for back legs, and a cannon on its back formed from various cans bolted together - kinda like the one used by Garbagemon! Did they intend Junkmon to be a child stage especially for some of the trash-like Digimon? I'm not sure I'd accept it in that role as readily as I do Chuumon, but it's still a fun concept, even behaving exactly like a Beaver, except it chews up and builds stuff out of metal instead of wood, duh!

It does not, however, have a clear "official" evolutionary line, weirdly evolving most easily into Minotaurmon. I suppose it's because Minotaurmon has that "jackhammer" weapon and also seems kinda like a big puppet, or costume, or something, but it's still kind of a reach, isn't it? It's so unique, I think Junkmon really warrants a full line of evolutions with the same aesthetic and themes. It could remain a beaver and take on aspects of heavier and heavier machinery, or the base animal could change along a different theme, like all woodland creatures or all aquatic and semiaquatic mammals!