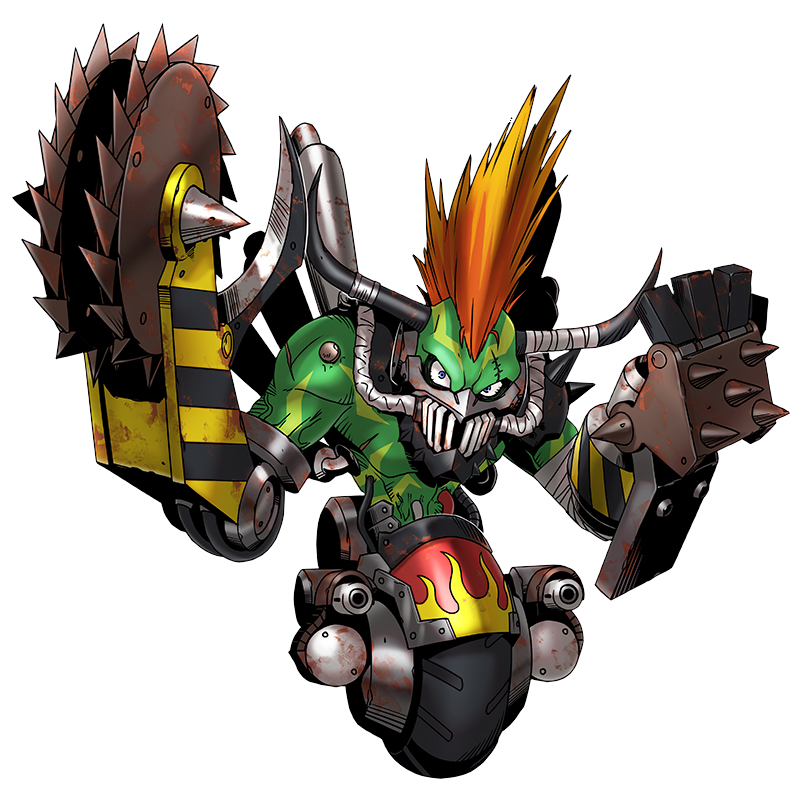 WAY TOO RADICAL. Rebellimon is a green ghoul with many similarities to Ogremon, and was even known as Metalogremon during development. It has a metal grill mask straight out of a Mad Max movie, a single motorcycle wheel instead of legs, one big chunky metal hand and one big chunky, rusty rotary saw arm, all bolted together from what looks like recovered scrap. Gorgeous.

Concept art for Rebellimon has also been released, and shows that at some point it was imagined with four robotic legs instead of its wheel, and I think they ultimately made the right choice, except that the legs could have allowed it to ride on Machmon! Instead, it's mentioned that Rebellimon frequently takes command of Machmon packs, though oddly enough it most directly evolves from Minotaurmon, making it the first known "official" Perfect stage of Junkmon!

As for Rebellimon's own evolution, what they give it in this vpet is Gundramon. I'd certainly love to see an even bigger, badder cyborg ogre, yes, but honestly, look at Rebellimon and tell me with a straight face that he'd want any Ultimate stage other than a dinosaur made out of guns.

At least, I know that's what he'd pick if he had to choose existing evolutions. If Rebellimon could evolve into anything more ludicrously extreme than Gundramon, you know he would. He would evolve into a giant, screaming skull atop a flaming skateboard, or a rocket-propelled chainsaw ridden by multiple naked demon women, or maybe a Digimon that's just an explosion in the shape of a middle finger? I'm also gonna say it'd have sunglasses on it. All of these things would have sunglasses on them.