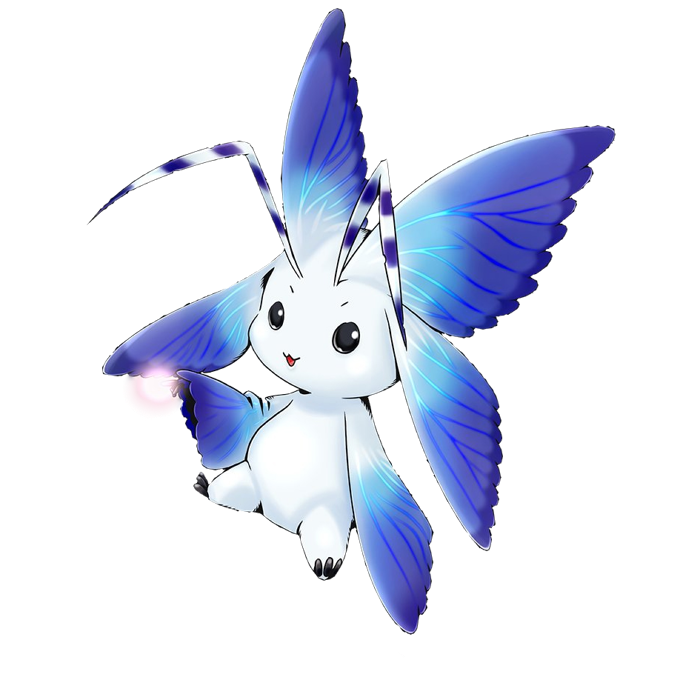 A butterfly-based child stage, huh? But we already have caterpillar digimon as child stages! I guess we also have beetles, like Tentomon, and beetles also have larvae, so it's never been consistent either way. Morphomon doesn't actually look much like an insect, but kind of a little white baby-shaped fairy creature, it just has butterfly wings on its head and as sleevelike arms, which is still reasonably unique. The solid black eyes are still pretty insectlike, and its white fluffiness not unlike a moth; if not for the tiny catlike mouth it'd definitely still feel like an insectoid Digimon. Not bad. 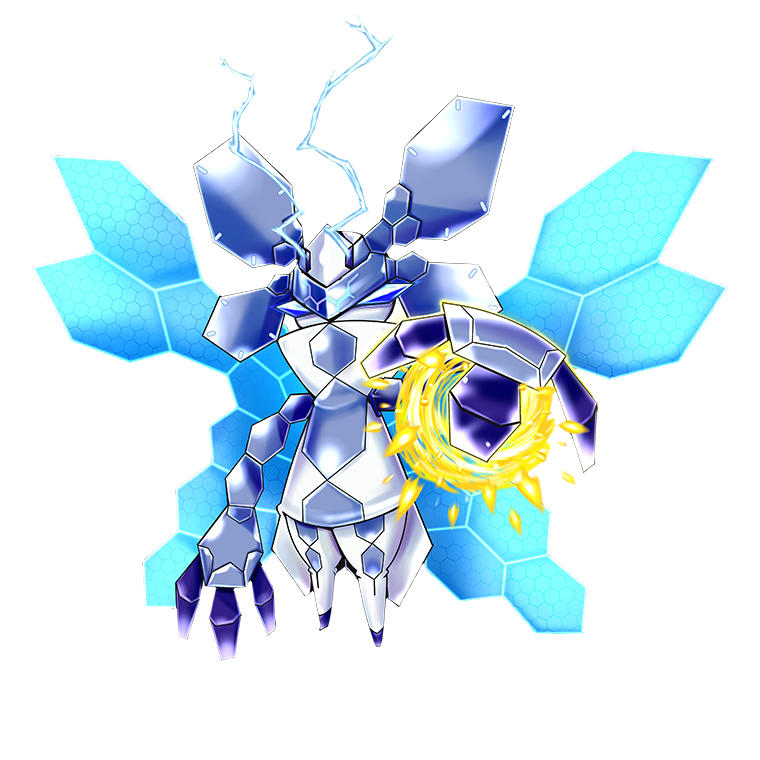 Without spoiling the film's story, Morphomon's adult stage is this cold, faceless robot artificially induced by human meddling. While I'm not big into the clean and shiny machine types, I like the menacing sterility of Eosmon; definitely the kind of thing an emotionally unstable scientist creates for initially sincere purposes. 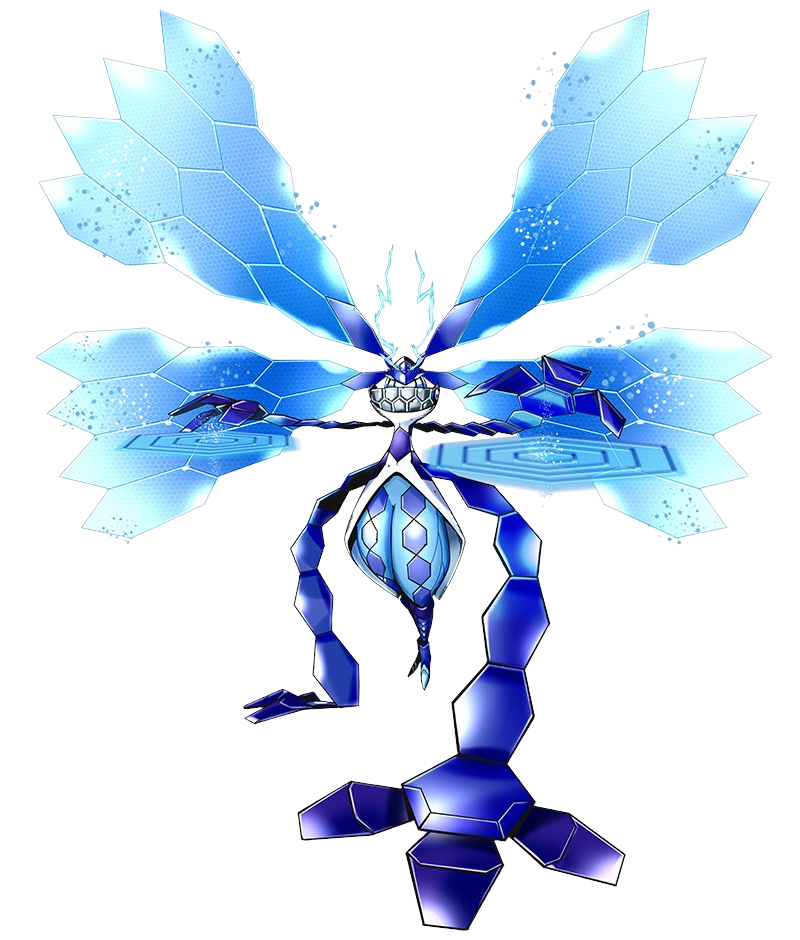 This is another of those Digimon with the same name regardless of its evolutionary stage, which usually is reserved for Digimon created kind of "outside" normal Digimon evolution, I guess? Like Algomon existing entirely as an error. Perfect Eosmon is honestly pretty cool looking; its body is sort of an hourglass-shaped humanoid with fat legs, but they convincingly form the shape of a butterfly with a swollen abdomen, and it primarily stands or walks with two or more of its long arms, formed from chains of hexagonal mirrors. Notice that none of those arms are attached to the "shoulders" or "upper torso" of the humanoid shape, and the long, menacing, crystalline wings still emerge from its head! 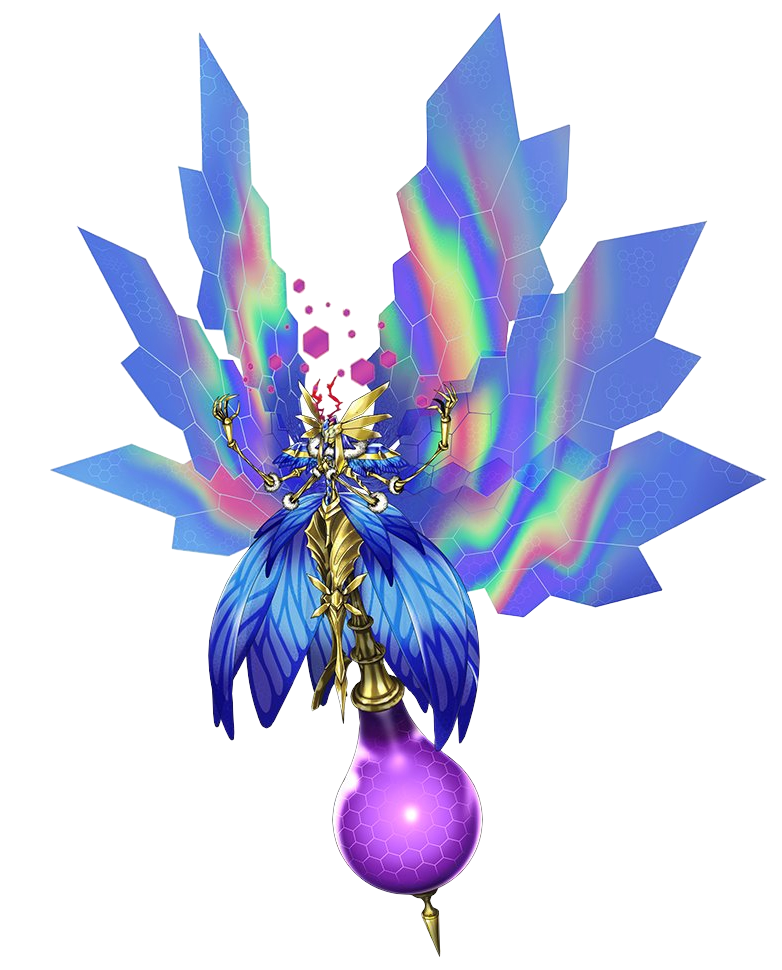 Wow so this one's absolutely RAD?! Eosmon's Ultimate evolution, from a distance, seems to drop its modern tech motif for an aesthetic that reminds me more of an antique, brass lamppost - complete with a gigantic, purple lightbulb for an abdomen. To appreciate its finer details, however, we'll need a few of Wikimon's anime screenshots!

Ultimate Eosmon still has the mirror-like hexagon wings, but it also has somewat more organic looking butterfly wings forming frilly shoulder decor and a sort of cape or dress, its body is an eerily elegant humanoid with an insectile, spindly-limbed figure, and its face is covered up by an eyeless mask in the tradition of angel digimon. While I do wish the few Ultimate-level insect types weren't so dominated by machines and humanoids, this is honestly one of the coolest digimon bugs in a long time, and I highly respect that a butterfly Digimon is actually more terrifying than a lot of the demon Digimon out there. I feel like this is even a suitable Ultimate stage for Ladydevimon and Arukenimon, as well as an Ultimate I'd accept for Toropiamon a couple pages back! A terrifying flower dragon to a terrifying butterfly just works.