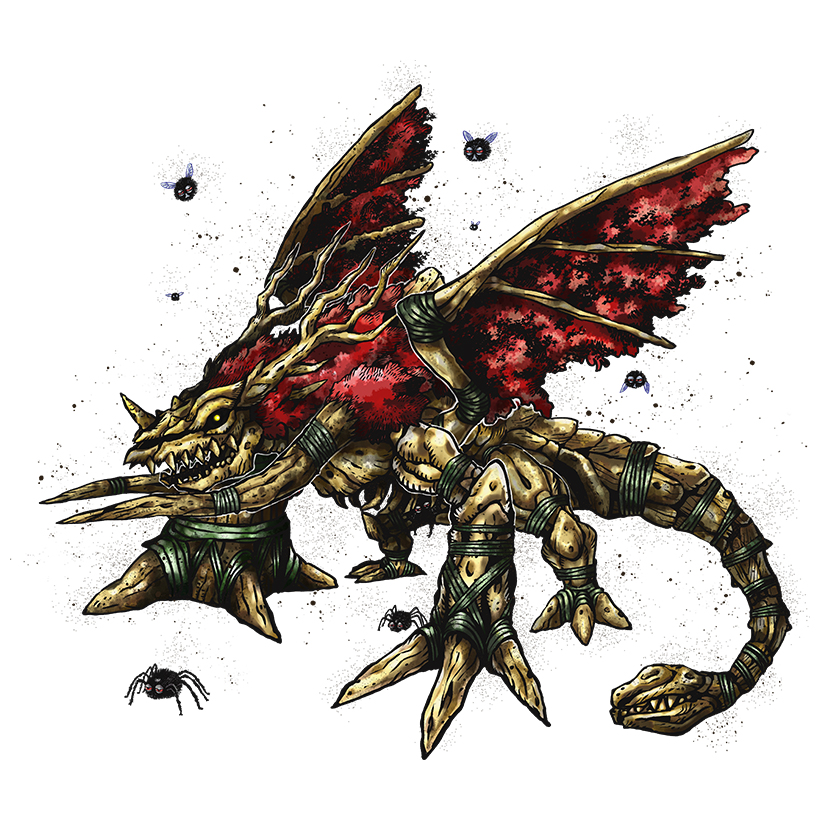 I know I usually insist on transparent images, but there's no way to transparify this one without losing its most important feature! This nightmarish dragon-like beast is cobbled together from dead leaves and rotten wood, all puppeted around by millions of swarming digital flies!

It pains me that that these adorable buzzy fuzzballs can't be Digimon in their own right, but I'm glad any Digimon incorporates such a flawless representation of the Diptera, in this case serving as not only the "musculature" of this decomposing kaiju but a plague it spews forth to consume vegetation and spread famine across the land! That, and you can possibly interpret them as Entmon's "true" form anyway, in a sense. It's interesting to note that these creatures have fly wings, fly probosces, and eight wiry legs, but can retract any or all of those features into just a grey sphere. They're basically multi-purpose spider-flies!

Entmon appears to be a "death evolution," like Skullgreymon, but especially for plant-type Digimon! In its Pendulum Z appearance, it's an alternate undead evolution to Parasaurmon instead of Toropiamon, which kind of means both of Parasaurmon's introductory Perfects have a dark and malevolent angle to them. In the same v-pet, however, Entmon is an evolution of the device's designated trashmon, good old Vegiemon! Vegiemon's original evolution is Vademon, which I like best for its sheer weirdness, but if you want the rotten weed to evolve into an even rottener weed, that's finally an option on the table and it is a KILLER concept!

It's a shame that, like Toropiamon, Entmon's own go-to Ultimate in Pendulum Z is just a big scary bird, in this case Zhuqiaomon, but if you read yesterday's review, you probably already agree with me that the brand new Nidhoggmon is a much more suitable choice, since it too resembles diseased tree material, and even has those insect-like wings! I also mentioned what a suitable evolution Nidhoggmon would be for Petaldramon, and interestingly enough, an anime episode pits Petaldramon and Entmon as ancient nemeses!

I would also nominate this as a Digimon that would evolve directly into Rafflesimon, which you agree with if you know anything about a Rafflesia.