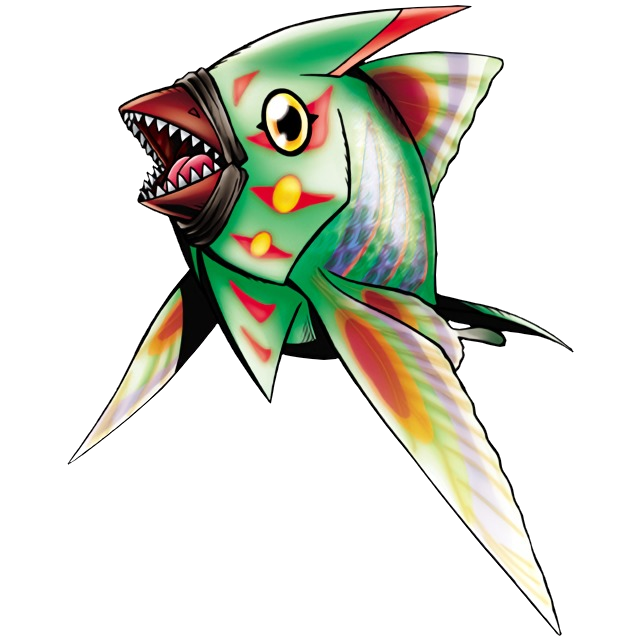 So, first, feel free to read or re-read my review of Swimmon a lovely little tropical fish with a novel "realism" among Digimon, and something I once openly wished might receive a new, dedicated evolution. Sure, the very cool Coelamon exists, but it's just a very different kind of fish, and has been awfully lonely as the only bony fish among Adult stage Digimon...until now! 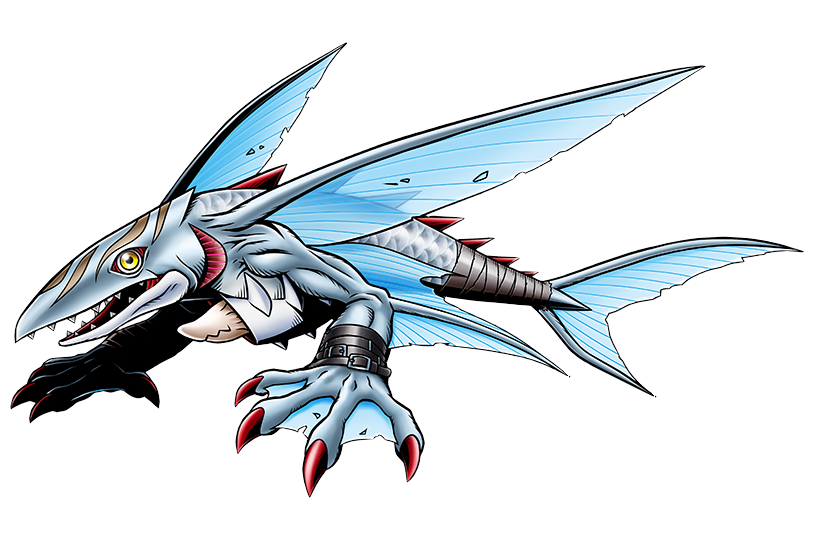 With the Deep Savers Pendulum Z comes this brand new evolution tied most directly to Swimmon, and something just feels SO cool and special about a big, beastly Digimon based on a modern, web-finned, silvery-scaled, open-ocean pisciform that I can't even quantify in easy language. Again, not to dilute the awesomeness of the Coelecanth option, but just looking at Tobiumon, I really feel this as the Greymon or Garurumon for Icthyologists, if you're feelin' me here?? Maybe???

It's just not a category of animal that gets too much attention. Fish like this are lucky to be minor throwaway monsters in most media, constantly overshadowed by sharks, sea mammals and things with tentacles, in kind of the same way a plain ordinary lizard is a rarity over the more crowd-pleasing dinosaurs and crocodilians. It's actually specifically supposed to be a flying fish, but it's gotten the Digital Monster treatment with meaner teeth, mystical-looking markings on its head, a pair of monstrous arms (with belts!), and most delightfully, one of those classic "living missiles" we haven't seen on a Digimon in a LONG time! A wonderful little pale, eyeless critter that can be launched from its underbelly and officially known as a "suckerfish dart!"

Tobiumon can further evolve into a few different Digimon, but most directly into... 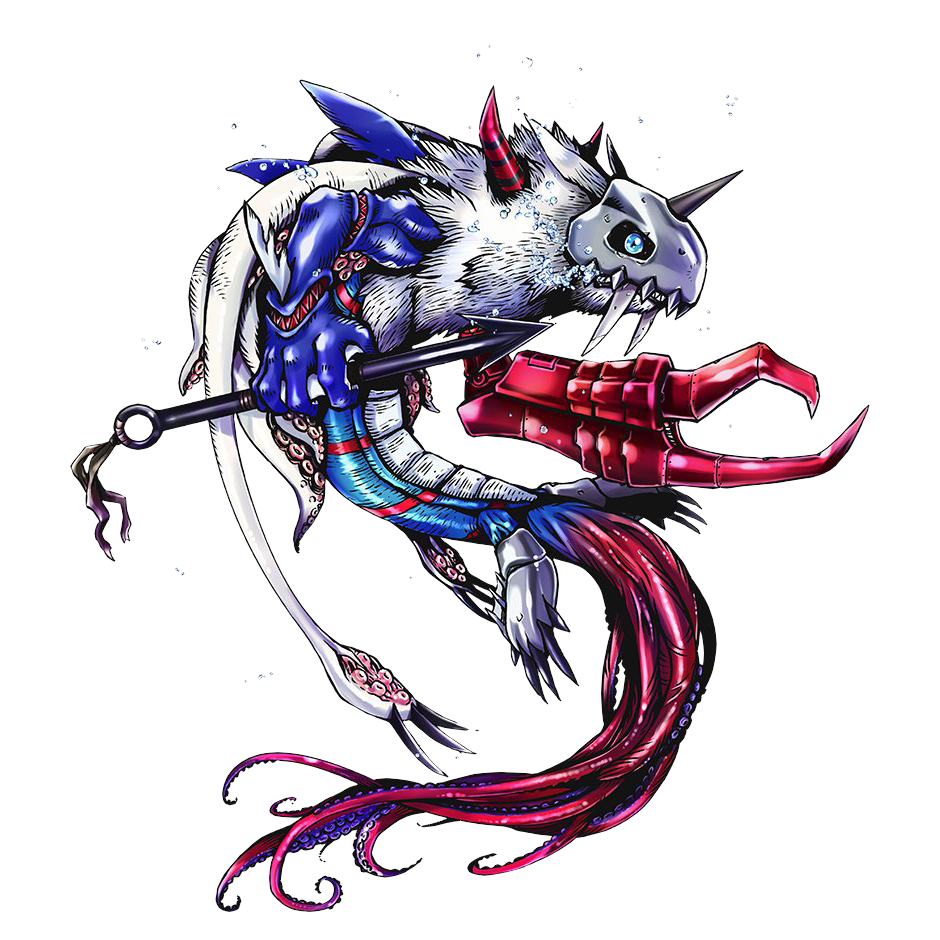 ...A sea-monster take on Chimairamon!? NICE! Just as Chimairamon combined a bunch of famous, mostly terrestrial or flying Digimon, this monstrosity patches together some of the most iconic terrors of the Digital ocean:

The creature is overall somewhat serpentine, with the face and rear flippers of Coelamon, an arm from "Divermon," a pincer from Ebidramon, tentacles from Gesomon, the tail of Seadramon, a set of striped horns and trailing cluster of thinner, redder tentacles from Octomon, and the central horn, tusks and white fur of Ikkakumon!

It's a bit odd that every one of these parts comes from an Adult-level Digimon except for the arm of Divermon (Hangyoumon), and no elements come from Tobiumon, but I guess that's because Tobiumon is new, and this is meant to be a mix of "classics." I do like the idea of Tobiumon evolving into a combo of all these other sea creatures, but by having none of its elements and a face primarily from Coelamon, it does feel "made" more for Coelamon first. 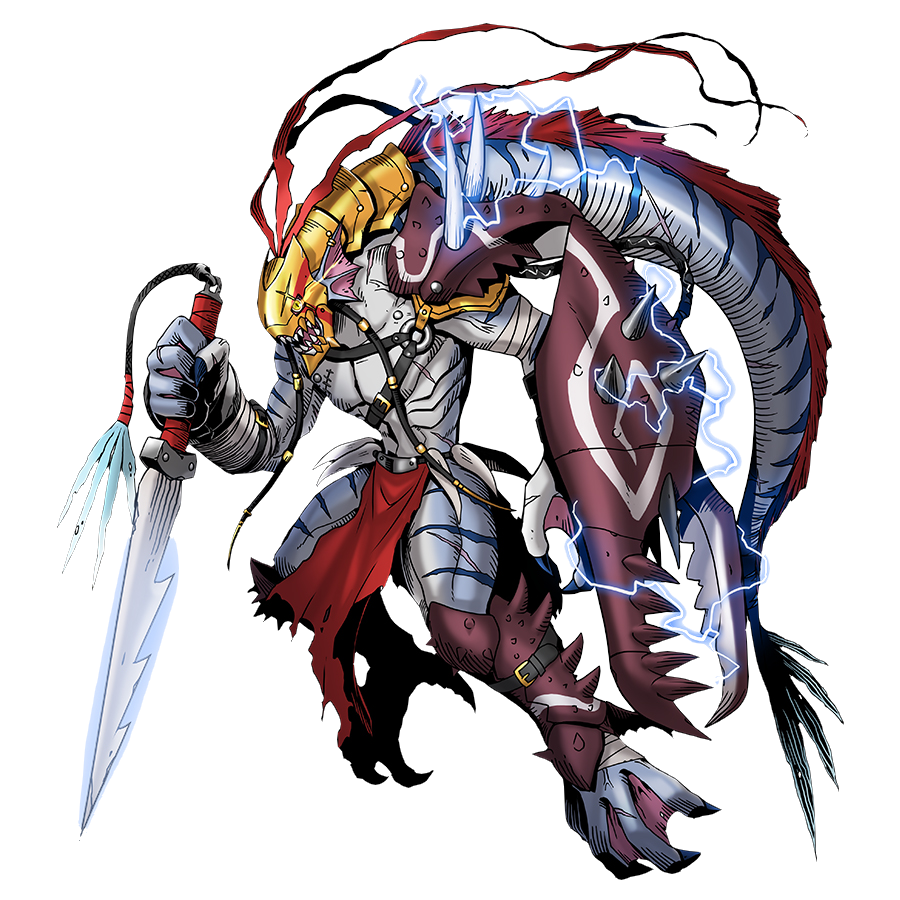 Previously, fish Digimon had few Ultimates to choose from outside some mer-people, the obscure Metalpiranimon and also obscure Pukumon. Now, however, there's an option for a scaly, aquatic humanoid with an entire fish for a head - a seldom seen but always delightful design trope - and more surprisingly an oarfish, from which this Digimon derives its name!

Seen here in its Animal Crossing glory, Regalecus glesne is the longest bony fish alive today at nearly sixty feet in some specimens, and certainly seems like an animal that should command respect...but with its big, googly fish eyes, fangless sucking mouth, delicately gelatinous flesh and diet of mostly smaller zooplankton, it's actually one of the least menacing larger animals in the seven seas.

Well, not if Digimon has anything to say about it. Regalecusmon has a totally shredded humanoid body, a gigantic knife forged from a Zudomon horn, a giant claw and various other armored chunks ripped from an Ebidramon, an imposing golden mask and far more ferocious teeth than its real inspiration. It visually makes perfect sense as the Ultimate for this line, as well as the Ultimate for just about any other sea creature, and while I already said this of Nidhoggmon, it also works well for the Cthulhu-based Dagomon, whose name comes from the more fish-faced Dagon anyway!

Today's fishy friends are a solid new addition to Digimon's roster of sea creatures, but not the only ones added by the new Deep Savers; we've got three more reviews to come with more marine biology fun!