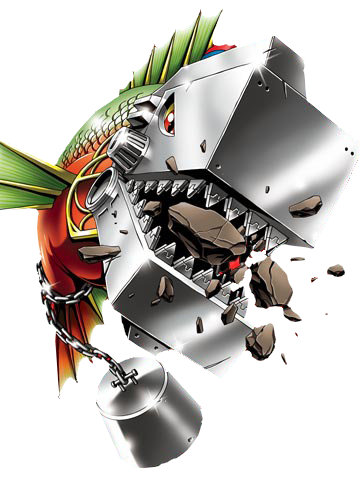 Take a moment to refresh your memory of Metalpiranimon, a Digimon I mentioned in our last review as one of the very few fish-based Ultimates, and as you'll see under the link, originally the final stage of one of the strangest "official" progressions in any Digimon virtual pet. For somewhere around two decades, Metalpiranimon has been an obscure and forgotten anomaly with very few appearances, and like such Digimon as Skullbaluchimon, no "normal" prevolution or counterpart to give it context...but also like Skullbaluchimon, that has now been rectified in 2021! 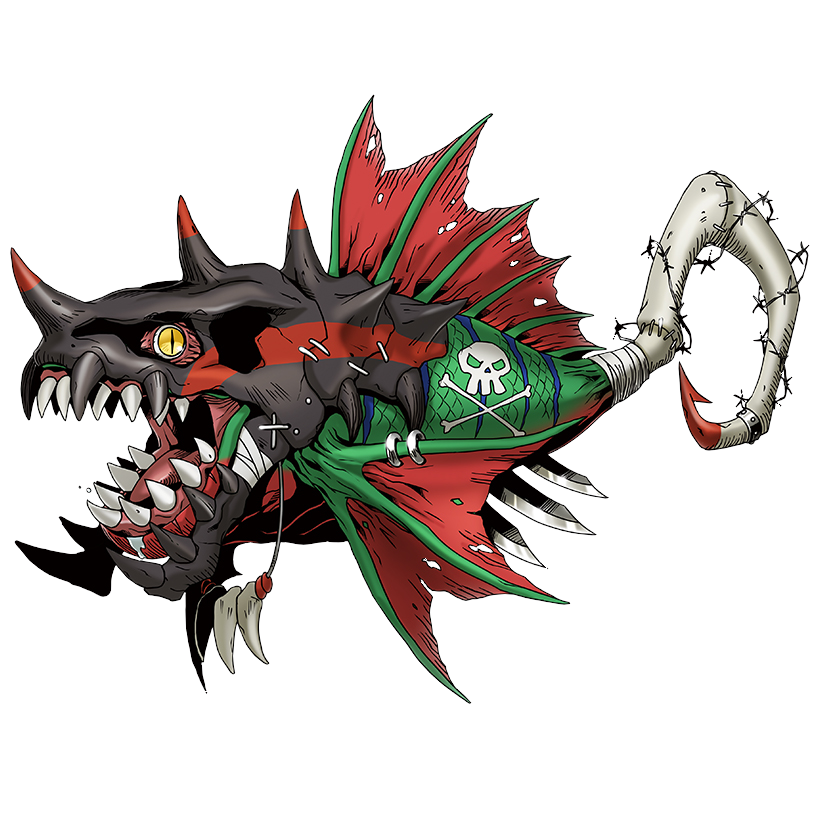 Regular non-metal Piranimon is a Perfect stage added by the Deep Savers Z, and you might expect it to be an alternate evolution for Tobiumon in that last review, but nope! Piranimon evolves from a selection of Jogress (fusion) combinations, and while a couple of them allow you to use any Adult Digimon you have on hand, none of them require a Tobiumon, so I can't count this one as part of Swimmon's line per se.

Anyway, we've seen a lot of Digimon celebrating the design gimmicks of the franchise's early years, but Piranimon packs together even more of them; it has the skull of some other monster stitched over its head, it has a skull and crossbones tattoo, its fins are tattered, it has knife blades growing out of it, it has piercings in its fins, it has a shark tooth necklace which is really silly on a big fish, its entire tail has been replaced with a bone hook that's bandaged in place, and to top it all off, the hook is wrapped in barbed wire. The edge readings are just about through the roof on this one, and that's before we even get into naming its attacks!

Piranimon's bony helmet is referred to as an "exoskeleton" that enhances its biting power, but first it uses an attack called "Cruel Invite" to impale its opponent on its giant hook and drag them underwater. It then uses "Calamity Vise," which is described as "rapidly oscillating as it gnaws through its prey, puncturing their body, killing them."

Funny enough though, Metalpiranimon isn't even included in this v-pet, and Piranimon's direct evolution in this instance is Leviamon! I really like this idea, because a piranha's reputation is as a very small fish with a disproportionate ferocity - a creature that already acts like something a whole lot bigger. You may know that this is kind of a misunderstanding, that a piranha is a very fearful and skittish little creature for something with such a powerful bite, but both the myth and the reality point to a creature that would dream pretty big, and when you're a fish, there just couldn't be a bigger dream than the Leviathan!

And really, look at Piranimon's design again...of COURSE it's insecure about its size.