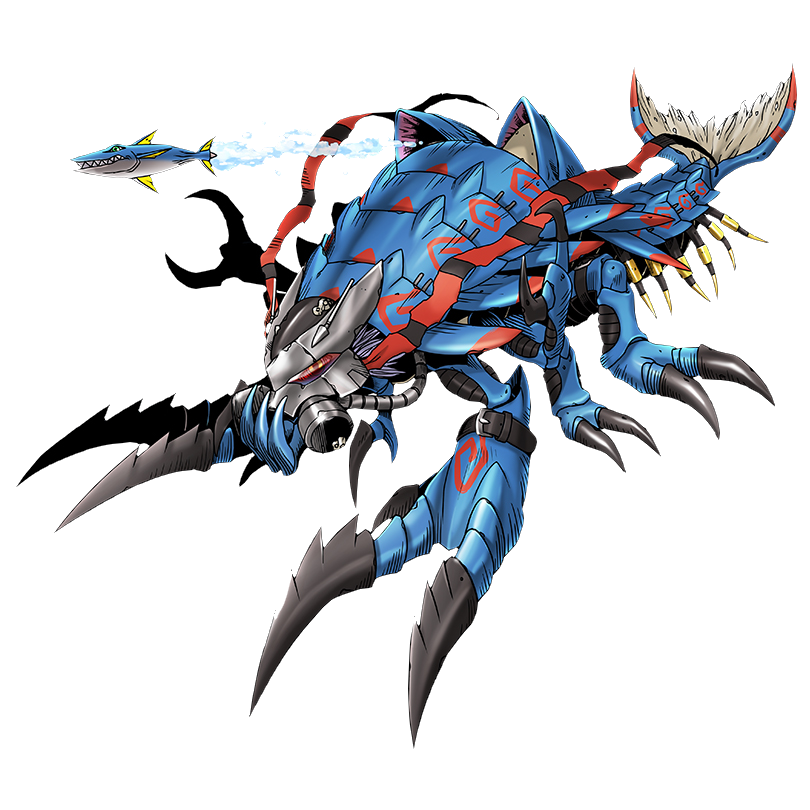 I am in awe. When Digimon originally debuted, even I had never in my life heard that there were giant isopods in the deep sea abyss - they weren't in any books I'd ever read, they weren't in any nature documentaries I'd ever seen, no aquarium in the world had them on display and they wouldn't go viral on the internet until several years later. When I finally learned about them myself, they were still such an obscurity that I never, ever thought I'd see them in a piece of media, but times really change! Pokemon finally introduced one by the time the creatures had become a beloved meme, so I'm not as surprised by Digimon's take as I might have been, but I'm also not really used to Digimon being so into biology, either; it's usually still stuck to more mainstream organisms for the most part. Gusokumon does have a bit more of a lobster-like silhouette, admittedly, but the back plates and paddle-like fringe are unmistakable, as are the narrow eyes peering from its kickass metal breathing helmet. That, and its official bio describes it as a very long-lived Digimon that can survive "consuming a miniscule amount of energy" at depths where no natural light can reach!

This is also one of the only new arthropods we're getting in this wave, and once again dives (ha ha) back into a retro aesthetic by lifting a lot of its aesthetic style from Kabuterimon! Same sort of three-fanged underbite and same sort of bony "Xenomorph" limb style! It could work perfectly as an alternate, aquatic evolution for either Kabuterimon or its rival Kuwagamon, as well as an evolution of the truly lobster-based Ebidramon, which also gives Crabmon an actual bona-fide Crustacean for a final stage. Finally, its main mode of attack are explosive barracuda-like fish it can launch from the tubes on its back!

A giant isopod with every hallmark of an "original style" Digimon is something so cool, I would have assumed it was fan-made if I didn't already know better. If you showed me this with no context I would have thought "wow, awesome, I wish they were actually making Digimon like this."

The only downside is, unfortunately, that there's still no Ultimate-level marine invertebrate for this one to evolve into. If it had been an Ultimate stage itself, perhaps it could have evolved from Anomalocarimon, and what a lovely family line of chitinous sea monsters that might have made! With any luck, they may yet gift us an Ultimate-level Crustacean or at least some kind of marine arthropod in the future. How about a giant, ancient fossilized trilobite, or even an opabinia? A hermit crab so big that its shell is a shipwreck? A tiny little water flea with disproportionate fighting power ala the Mamemon line? Or how about the Giant Isopod's fellow internet meme the peacock mantis shrimp???