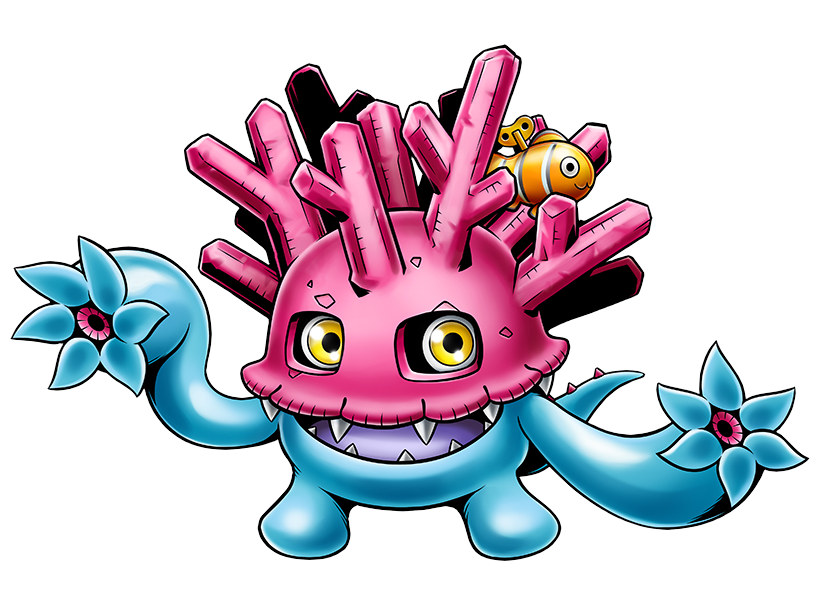 ...I'm not crying, YOU'RE crying!! And you're right to! Everyone should! That's just what you do when you look at something that's just this beautiful, OKAY!?!

Child stages always feel like the "most important" Digimon for reasons I've already gone over, but of all the child Digimon available, less than ten of them have ever invertebrate animals, and of those, all were based on Arthropods except for one: Syakomon. A bivalve mollusk Digimon released in 1998. That is actually TWENTY THREE YEARS since a new Animal phylum was added to the roster of child-level Digital Monsters, and that is an injustice no one should have stood idly by and tolerated! Where were YOU those twenty three years!? Huh!? Mostly probably quite dumb places, I'll BET!!!

But, listen, it's okay now, because there's Sangomon now, and Sangomon is a Cnidarian. Not even just the first Cnidarian child stage, but the first Cnidarian Digimon period. It's amazing that status didn't go to a jellyfish, their most famous representative, and that certainly would have been the same globally celebrated event, but a jellyfish also would have been the most obvious choice. Corals, though? Besides the new regional form given to Corsola a year prior, we hardly ever get corals as characters in, well, basically anything at all - they just get glossed over as part of the ocean's static scenery.

All this gushing I've done, and we still haven't started breaking down the design itself! Sangomon is another truly "classical" Digimon design: its body is a simple sphere with a wide, snaggly-toothed mouth similar to such greats as Palmon or Otamamon, it has adorably nubby, featureless little feet, a stubby lizard-like tail, oversized arms and those trademark reptilian cat-eyes Digimon has never abandoned for long.

The arms, however, end in entirely unique coral polyps, with short tentacles encircling what would actually be mouths on the real thing. Most importantly, the whole upper half of its face is protected by a craggy, pinkish-purple helmet with a pair of squareish eye-holes - another of Digimon's signature design quirks! - and a forest of coral branches, all topped off with the adorable addition of a wind-up toy clownfish. It should be mentioned that clownfish do, in fact, hang out in both anemones and soft-bodied corals, because anemones and corals are actually almost the same sort of animal; you can think of anemones as giant, lonely coral polyps without the hard calcium house, and yes, like anemones, corals also have stinging cells in their tentacles!

In Deep Savers Z, a Sangomon raised poorly enough will evolve into Karatsukinumemon, and I like the idea that Numemon's shelled counterpart might also be Numemon's go-to "aquatic" counterpart. Put a bit more effort into Sangomon, however, and you'll get Tobiumon - the flying fish from the other day - or Hookmon, which in this instance can evolve into Mermaimon and then Ancient Mermaimon. It's a lot of fun to have a coral monster turn into a pirate, then into a pirate mermaid, and then into a non-pirate but still pretty badass merwoman!

A Sangomon raised with the most attention, however, evolves into the classic Shellmon, therefore arguably its "truest" evolved form! From there, it can evolve into Waruseadramon or Jogress with another Digimon to become Mermaimon, Piranimon, or Gusokumon! That's a lot of sea monsters!

Know what else is nice? We finally have an aquatic child stage with tentacles. Even though most other tentacled watermons are mollusks, Sangomon is still an even better aesthetic match for Digimon like Octomon, Gesomon, Marinedevimon and Dragomon than the aforementioned clam ever was. I'd even go so far as to say that Sangomon works as a child stage for "eldritch horror" and "alien" Digimon as well; pretty much anything slimy and wriggly!

We just kind of end up hitting the same wall here as we do with Crustaceans, because there's still no tentacled sea monster among Ultimate stages, though there is technically one Ultimate level aquatic invertebrate, and I actually do really like it as a possible outcome for all these nautical horrors:

It's still too bad that Marine Angemon lacks the retractable tentacles of its Clione inspiration...maybe they can rectify that, some day, perhaps even with an X form or a "fallen" form?!