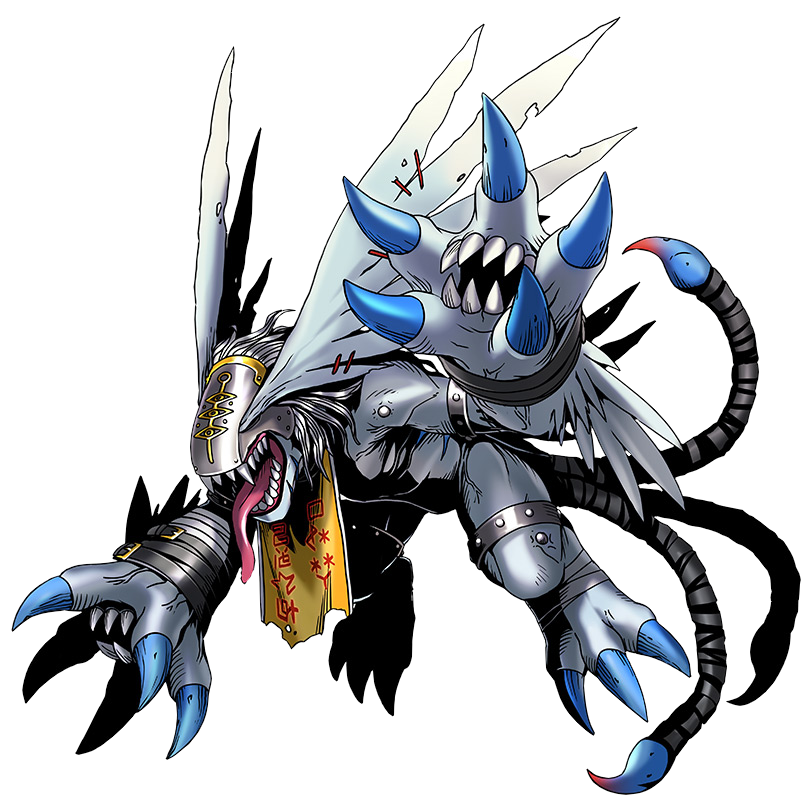 Leaving behind the new sea creatures at last, we have one of two surprisingly monstrous new Digimon added by the "Virus Busters Z," a virtual pet largely themed around the Angel Digimon. Manticoremon is a Perfect level, virus-type "Demon Beast" described as mindlessly brutal, driven by nothing other than a savage hunger to slaughter other Digimon and devour their cores...but if you can't tell by its color palette alone, it's actually part of the angel side, because other viruses and demons are almost all it craves!

It's a concept more out of a grimdark Heaven vs. Hell setting such as Bayonetta or even Berserk, and so is its design; it has those "Giger Alien" jaws that Digimon is so fond of, a faceless mask with a row of eye-like painted runes, an almost human shock of silvery hair, a pair of stitched-together angel wings sprouting from the eye holes of the mask, three scorpion-like tails and a pair of burly arms with gnashing mouths in their palms! My favorite detail, though, is the tattered scroll hanging from its neck like a bib. I don't know if that's what it was meant to evoke, but it does, and it's funny.

Strangely, the Manticoremon available in Virus Busters Z rather evolves from the new Baluchimon directly, but this conceptual art implies it was designed for Gargoylemon, a digimon you can read more about in our V-mon review, but it too is a demonic beast sort of "enslaved" by demon-hunting angels!

I also think the manticore works just as well as a potential evolution for the neglected Unimon! Not only do their aesthetics mesh beautifully, but Unimon's profile always emphasized the idea of a wild, fierce unicorn that can be tamed to total obedience with enough persistence, and its design is covered in whip marks for good measure; in this evolution you basically have a unicorn broken into a mindless monster and finally corrupted into a ravenous demon!

None of the Pendulum Z's Ultimates really suit Manticoremon as a final evolution, but if I were to pick one out from any in the canon?

...It would HAVE to be Ordinemon! This Digimon was originally a one-off fusion of two other Digimon, but this eyeless, saw-toothed, tentacle-haired, corrupted angel fits the look and feel of this hypothetical evolutionary line all too well! Now all we're missing is a suitable enough child stage, something that also blends a kind of "holy" look with a "creepy" one. Conceptually, that's slim picking, but visually I guess the closest thing would be Keramon!