Though I have many new favorites among these recent Digimon, few of them have really shaken up my "top ten," and few have been entirely new concepts, per se, until now... 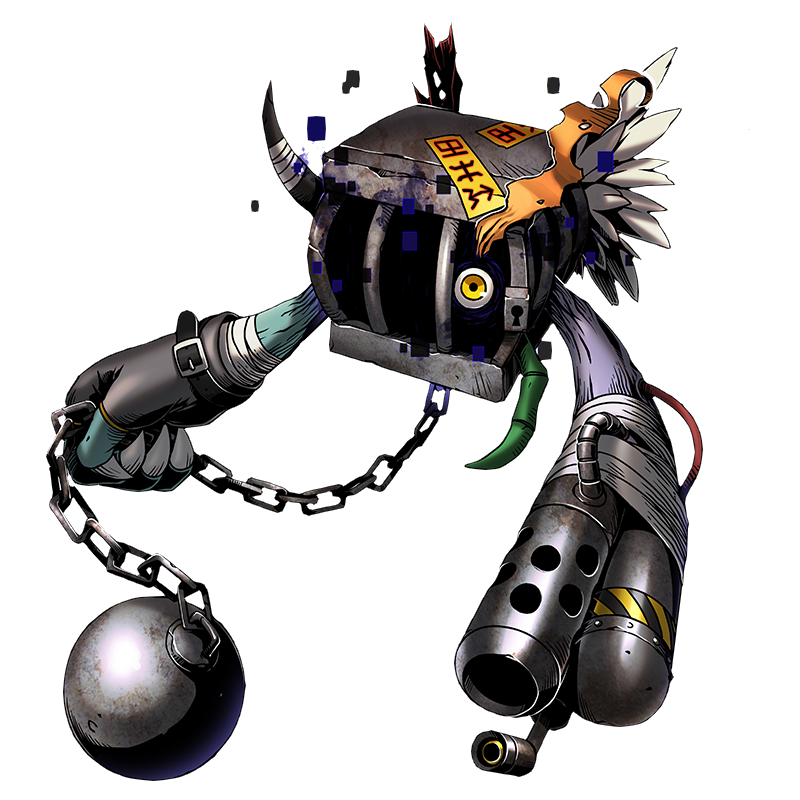 So how do you not immediately love this design? For once, my tastes seem to be on the same page with the fandom as a whole, because I've yet to hear anything but passionate praise for this zany new friend, who just consists of various Digimon body parts bursting out of a tiny, grimy metal cage; angel wing feathers, one devilish horn, one ribbonlike antenna, one arthropod claw, one humanoid arm holding up a ball and chain, one cybernetic arm ending in what looks like a flamethrower, and just a single little round eye, peering pitifully from the darkness within the cage. I love everything about this design gimmick already, but it's enhanced still by a lot of smaller details. I'm glad that the eye isn't centered, for one, so it looks more like there's just a misshapen and partially obscured face in there, I really like the cage bars visibly bending outward and I even like the pallid colors they chose for the humanoid arm-flesh.

While this is another Digimon that lacks an immediately thematic evolution line, that's only because it's kind of the "Numemon" of Virus Busters Z, a result of putting sub-par care into a Shoutmon or making multiple mistakes raising a Patamon! The intriguing idea here is that this Digimon was once a piece of security software - i.e. a Vaccine type - but captured and consumed so many virus types that it has become a virus type itself, still luring and absorbing other Digimon - virus or otherwise - that it incorporates into its condensed form! Maybe you noticed its little "glitch" effect already, stray squares breaking away randomly from its artwork!

The two fusion options are certainly fun ideas, as if feeding Mimicmon just one monster too many can tip its scales towards either a horrific or heroic digital chimera! What I'd really love for it, however, would just be an even more extreme variety of appendages emerging from something else, such as one of those stuffed toy style Digimon, or maybe something more befitting a "mimic" in the fantasy gaming sense, like a colorful gift box, a safe, the obvious treasure chest or even a cute little house!

...Oh, but thanks Nerotheintruder, who keeps reminding me of highly specific Digimon, for reminding me this time that Ultimate Chaosmon exists. Originally an unusual possible outcome for the Commandramon line, its collection of body parts and freaky eyeballs really would make an acceptable enough Ultimate stage for Mimicmon! Chimeramon also makes sense, as a few have pointed out, as a link between the two, however I'd actually like to nominate Digitamamon for this.

I could see Digitamamon representing what happens when a Mimicmon further compresses its data and tries to become a single new being, only to "hatch" into even greater chaos; which still wouldn't even be as odd a transition as when Digitamamon was officially cast as a pupating ogre.