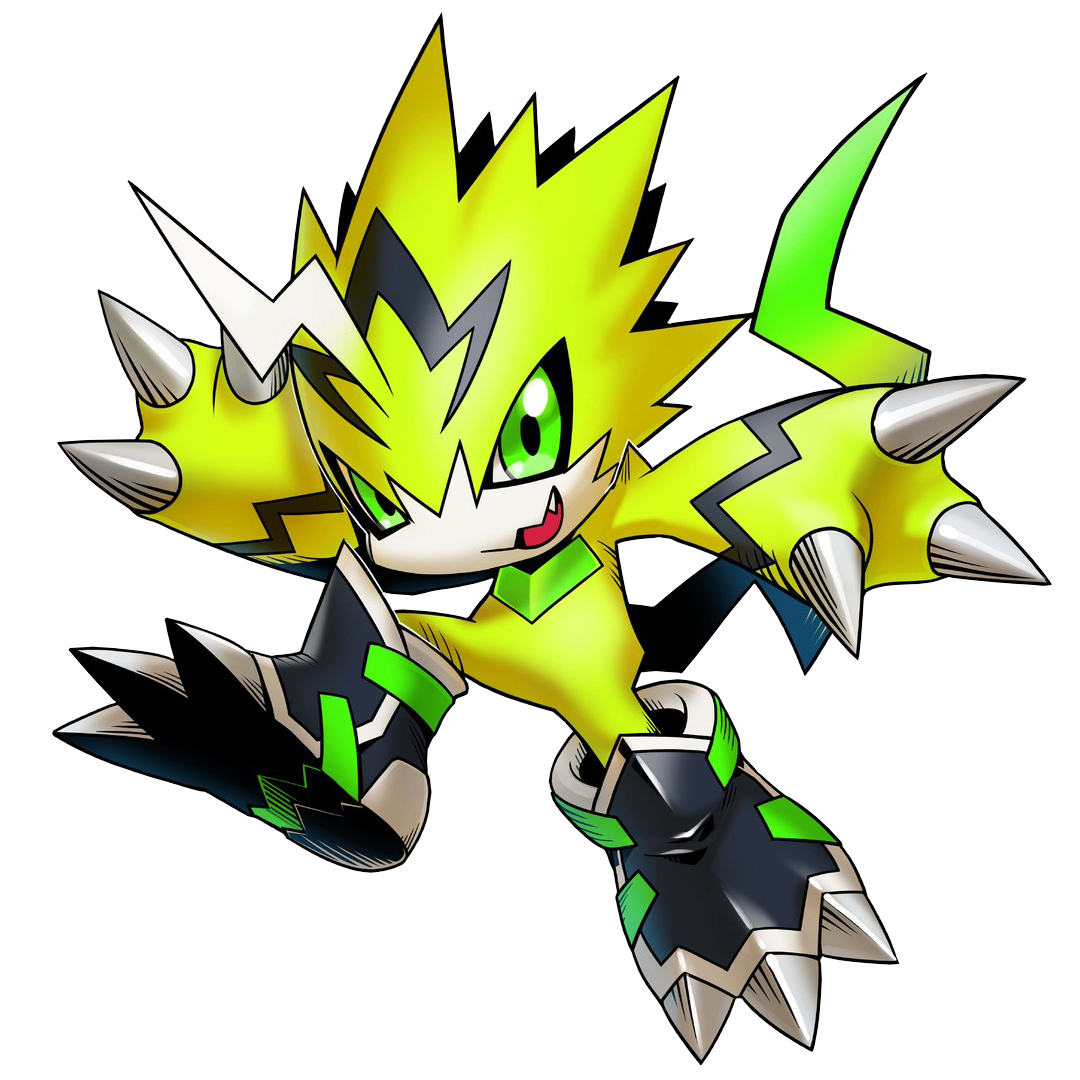 Before we review something truly MONUMENTAL, we're going to review the new evolution tree added by the Digimon Vital Bracelet, which is both a virtual pet and an exercise band! These Digimon are a wildly ecclectic bunch, yet they were all designed as a single family that begins with Pulsemon here. Its design is sort of generic for a Digimon; a yellow creature with claws, spiky fur, and a lightning bolt on its head. Whether it's mammalian or reptilian is fairly ambiguous, but it's a vaccine type "beast man" supposedly born from the human pulse data collected by hospitals and gyms. 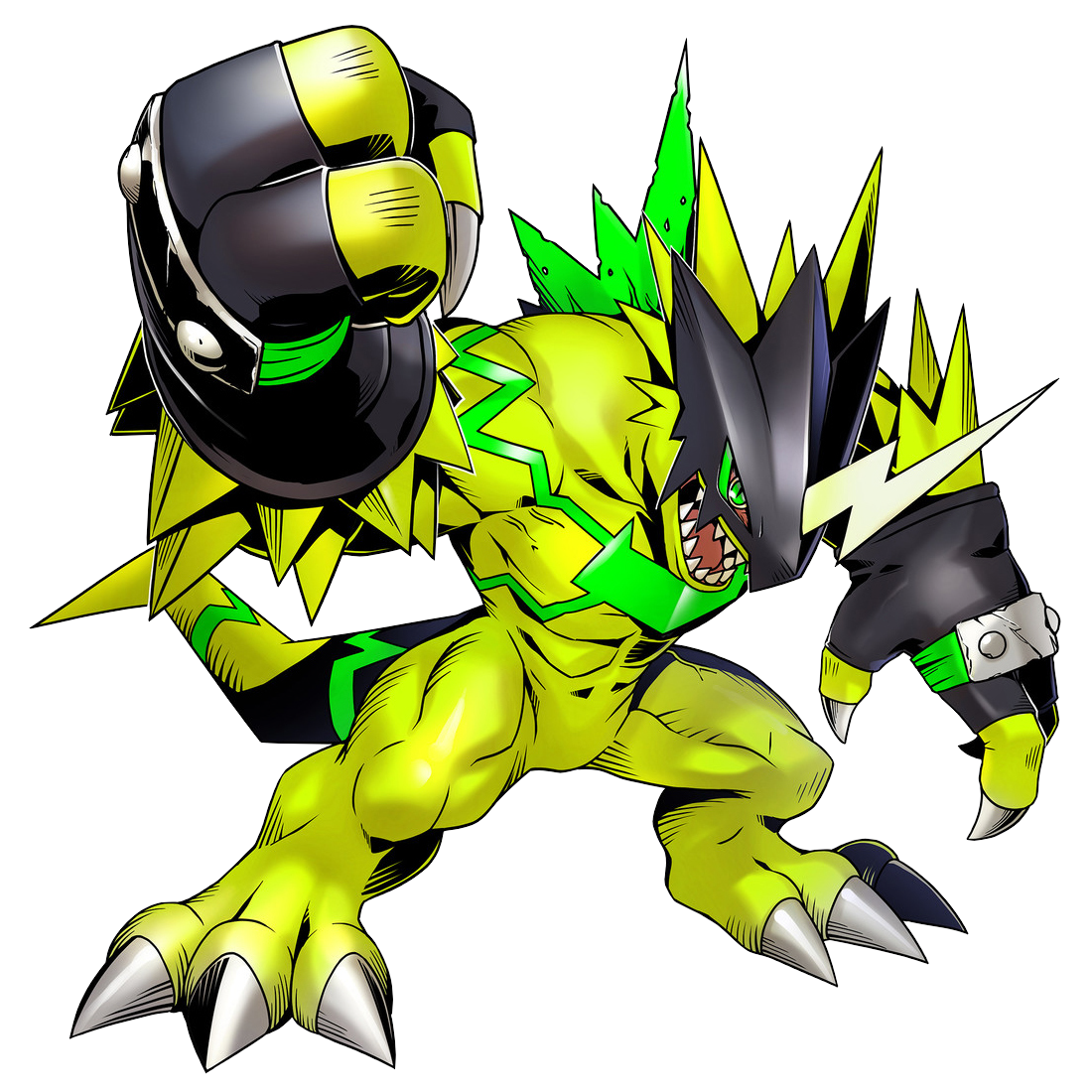 The only evolution of Pulsemon that really looks like pulsemon, Bulkmon was born from muscle mass data, now resembling a more dinosaur-like humanoid with huge hands and a black, metal mask. Simple and straightforward, but fairly cool looking; you don't see a lot of buff muscular reptilians. 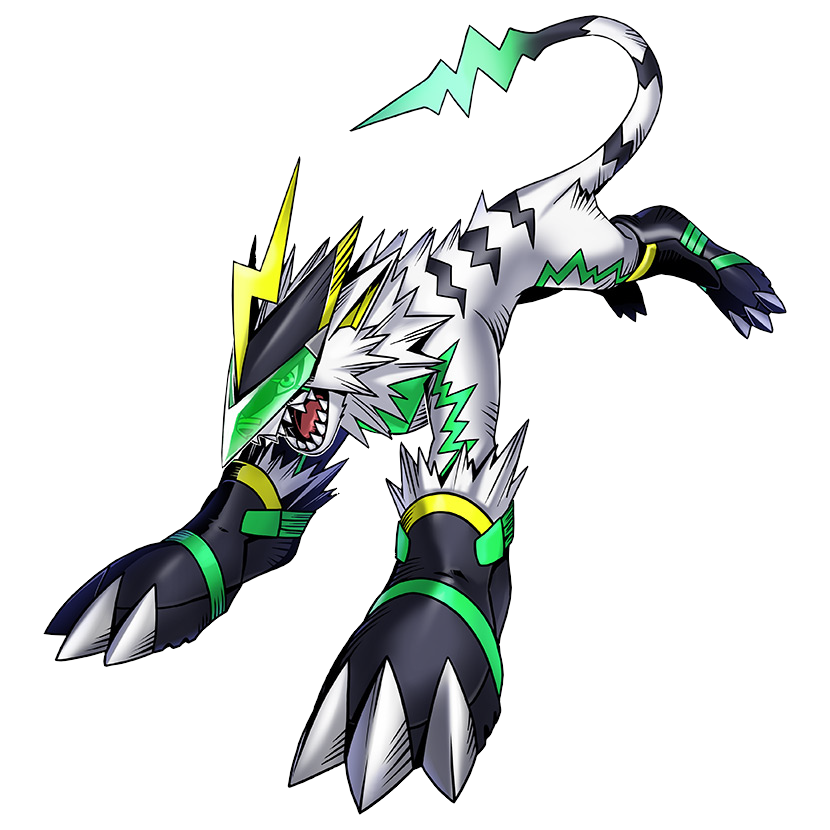 Born from treadmill data, Pulsemon's running-oriented evolution leans into its furred mammal side, now resembling a black and white tiger-like beast with a green-visored helmet. Its profile doesn't discuss much other than its speed, but I do like how the jagged green "heart rate" lines look on this particular design. 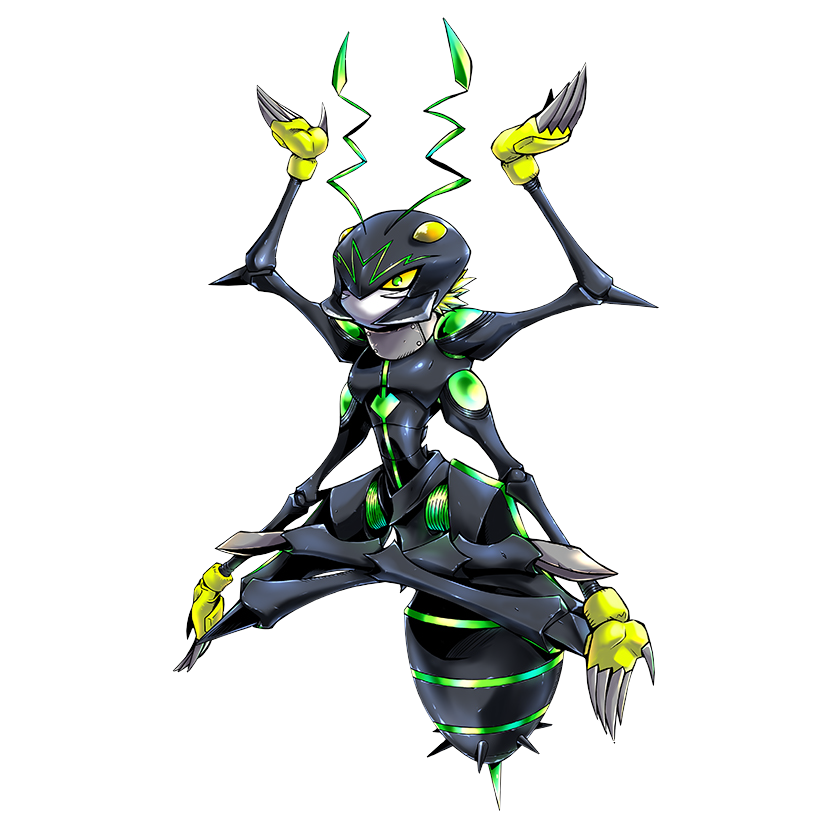 So, surprisingly, Pulsemon can also evolve into an insect type - our first ever ant-based Digimon! Cool!! It comes from yoga lesson data, hence its pose as it balances on the stinger tip of its tail. Its design is also REALLY cool; a thin, spindly humanoid with a slick, sharp exoskeleton, a mouthless semi-humanoid face framed by an ant-head "helmet," a metal neck brace and gleaming, green highlights that include those technorganic looking bubbles on its shoulders. Very tokusatsu, in a much snazzier way than I usually see!

Strangely, its description says it has developed its own style of taijutsu which "incorporates unique movements similar to those of a mollusk." A mollusk? Huh. 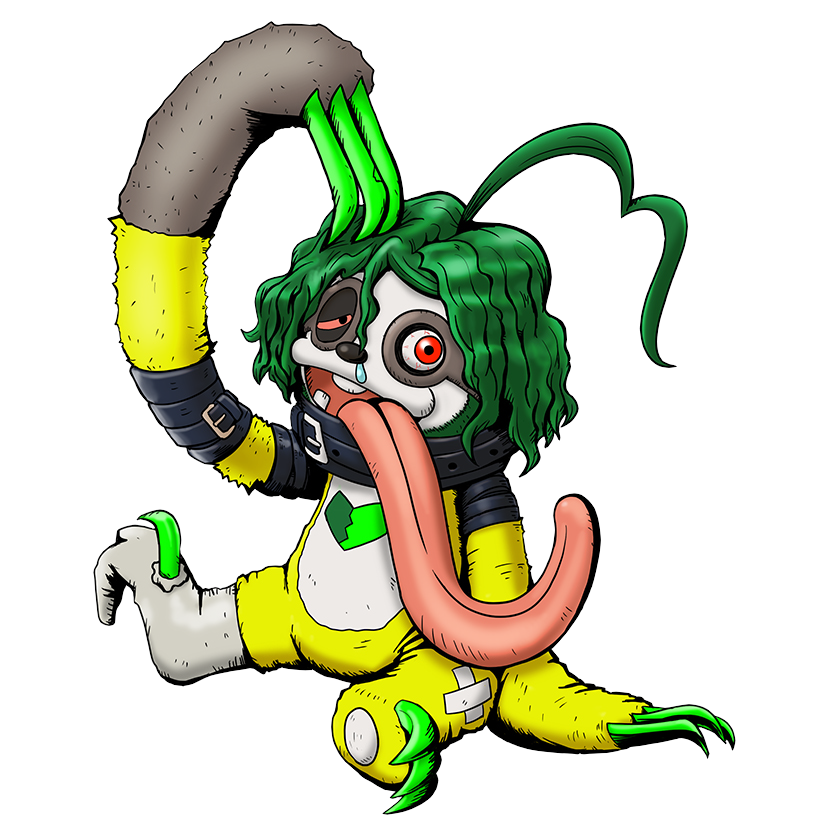 ...So, in an exercise bracelet digivice, can you guess the role of this sleepy, dopey, snot-nosed sloth? It is, of course, the result of slacking off too much, making it the "Numemon" of the Pulsemon line, and even defends itself by throwing its own feces. Such a fun design, though! I'm not sure where the greasy green hair comes from, but I really like its mis-matched eyeballs, long tongue, plush body and the copious black belts worn around its arms as well as its neck. 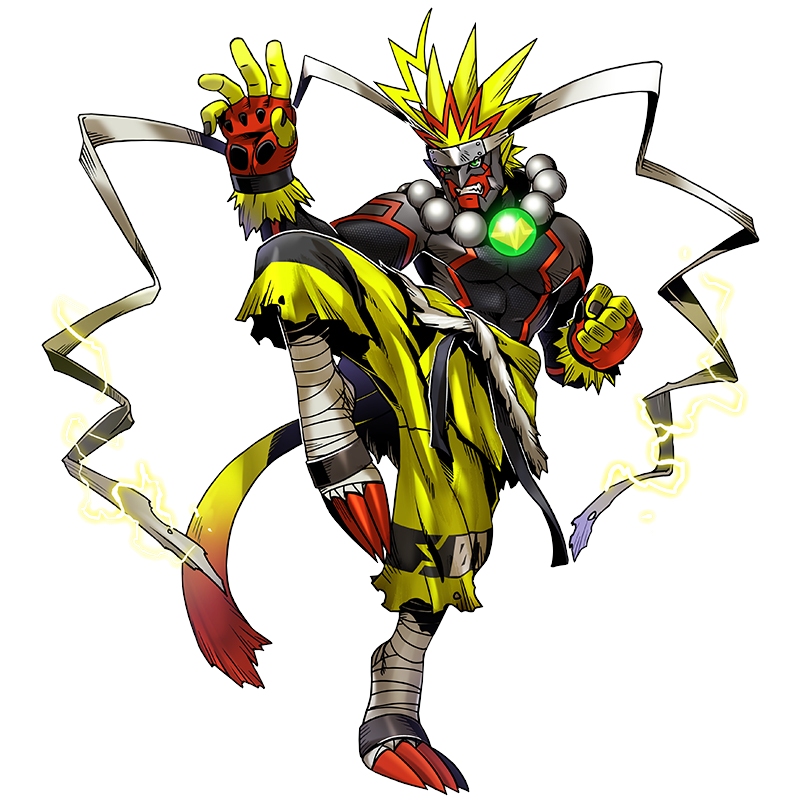 The Pulsemon line has slightly more Perfect stage than Adult stage forms, and I guess this one is the direct evolution of both Bulkmon and Runnermon, based on "combat sports." A bit underwhelming compared to those two beasts, though, being basically just a human with clawed feet, a fuzzy tail, Super Saiyan hair and a couple of electrical antenna things. 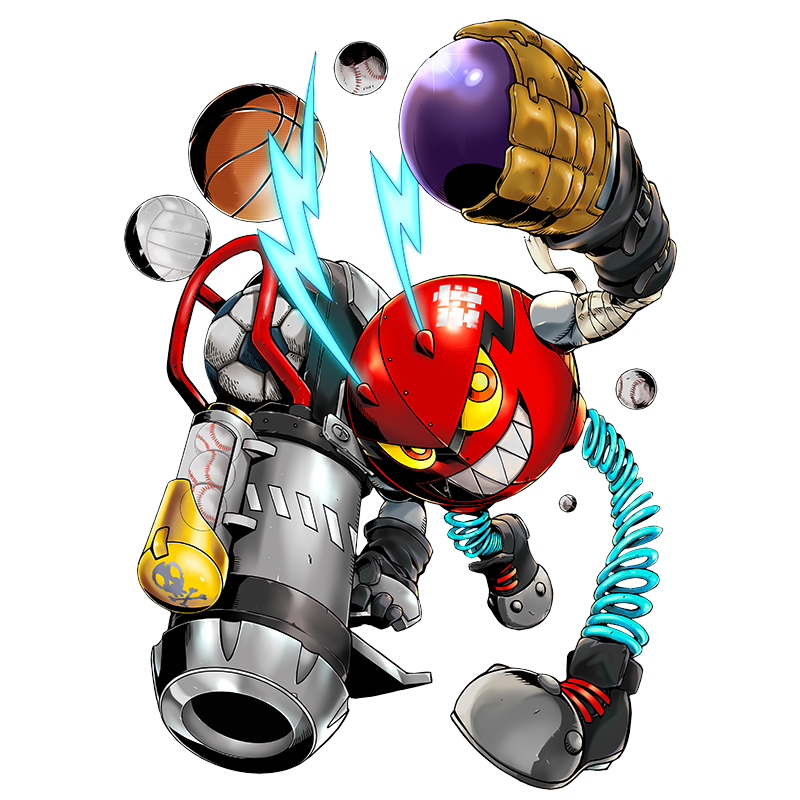 Much more fun! This mechanical "ball game" Digimon consists of metal sphere with a maniacal face, springs for legs and humanoid arms, one wielding an enormous bazooka that fires baseballs. It's a nice addition to the various Mamemons and similar Digimon out there, though it also strikes me that it would make much more sense as a Nanimon evolution than the usual Digitamamon!

One of its abilities, however, is the "Round Jail," which apparently changes its opponent into one of its sports balls to fire from its gun, and kinda sounds like somebody's ultra-specific fetish. 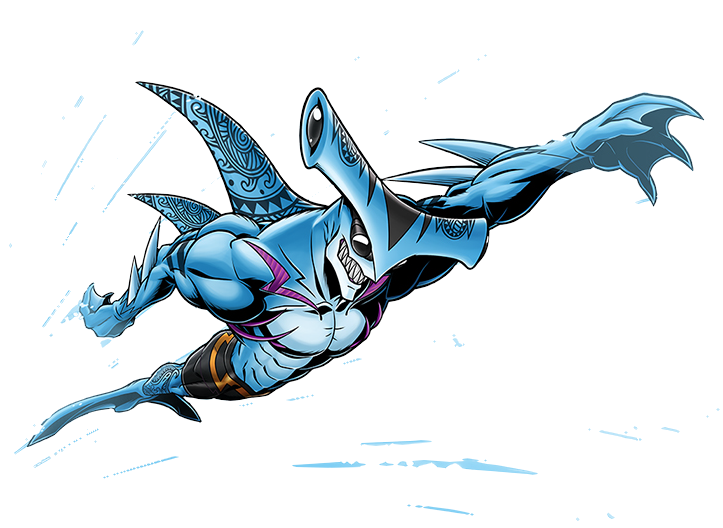 Aw, man, now I have to stop calling Hangyomon by its English name Divermon, or it's going to get mixed up with this one too easily! I guess the Japanese name was more "correct" as well as sounding cooler anyway, though.

Divemon is a superb new addition to the selection of mer-person Digimon and much rarer shark-based Digimon, resembling a humanoid hammerhead shark with fused legs and stylish bolt-shaped gills! I also like how it wears black swim goggles just under its "hammer," giving it a total of four eyes. No prizes for figuring out what kind of sport this one is. 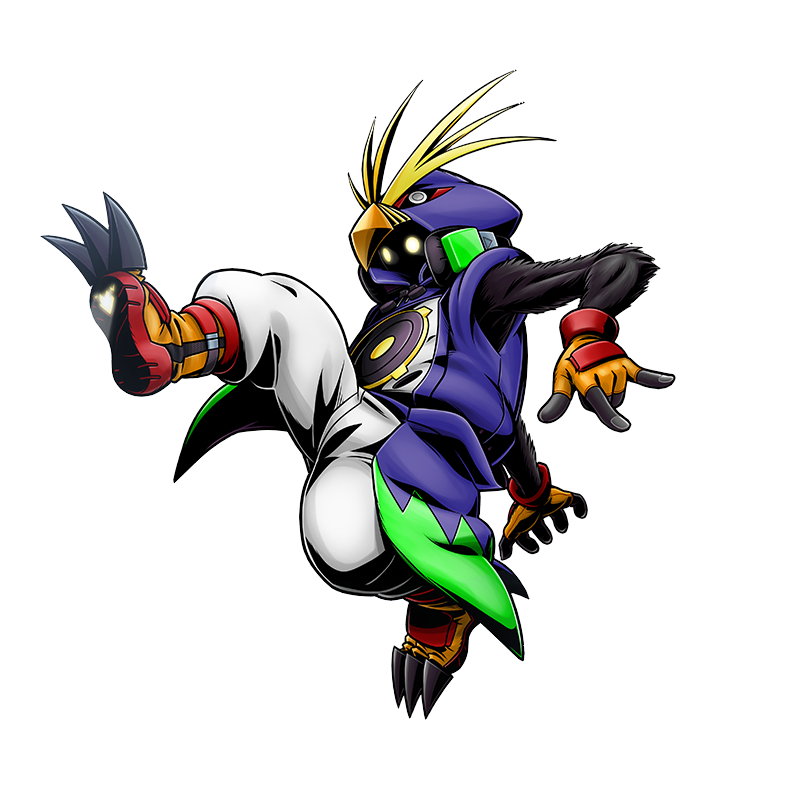 Derived from "dance music data," this "bird man" Digimon actually has no overtly birdlike features other than its penguin-like Hoodie, which conceals its true face other than those round, glowing eyes! It's been a while since we've had one of those kinds of Digimon, hasn't it? Its birdy claws are just part of its shoes, and its black-furred humanoid arms are distinctly more apelike. A very oddball creature, and actually one of the possible evolutions of the sloth! Otherwise, it can evolve from Exermon, so we can go from an insect to an ape-bird. 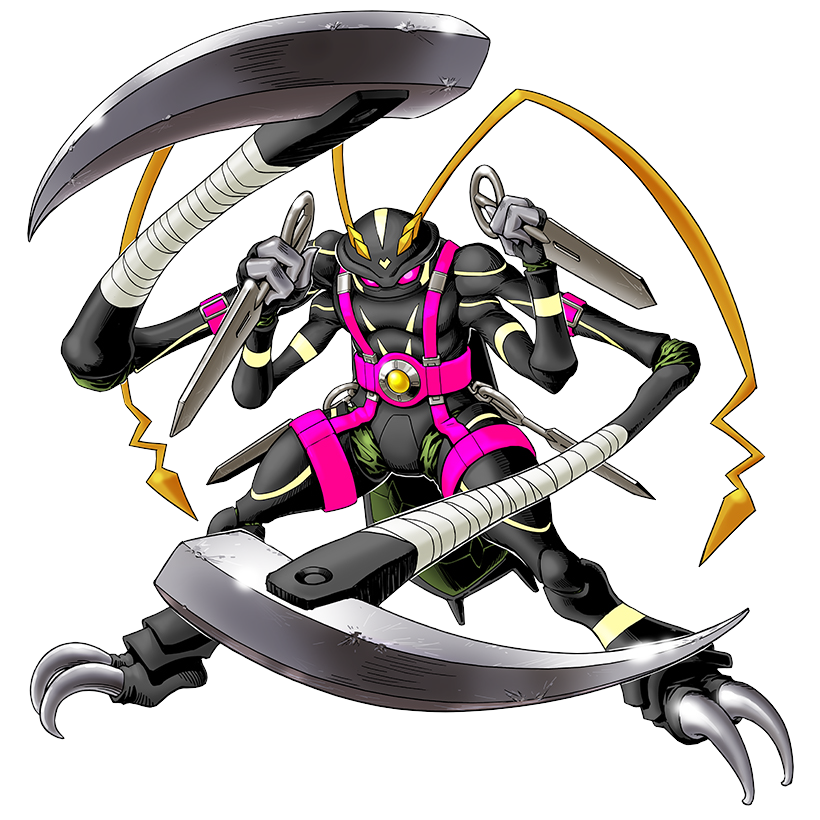 Inexplicably, this next Digimon evolves from either bulkmon or the sloth, not from Exermon, despite being another insect and having a great deal in common with Exermon's design. This one, however, appears to be based on a longhorn beetle, it has a fully insectoid head consisting mostly of a shell and menacing, narrow pink eyes, it has long backswept antennae and its first pair of arms, far longer than its other limbs, end in menacing pickaxes for rock climbing! Though definitely based on a beetle with a similar shape and white markings, it would also make a fun evolution for Roachmon. 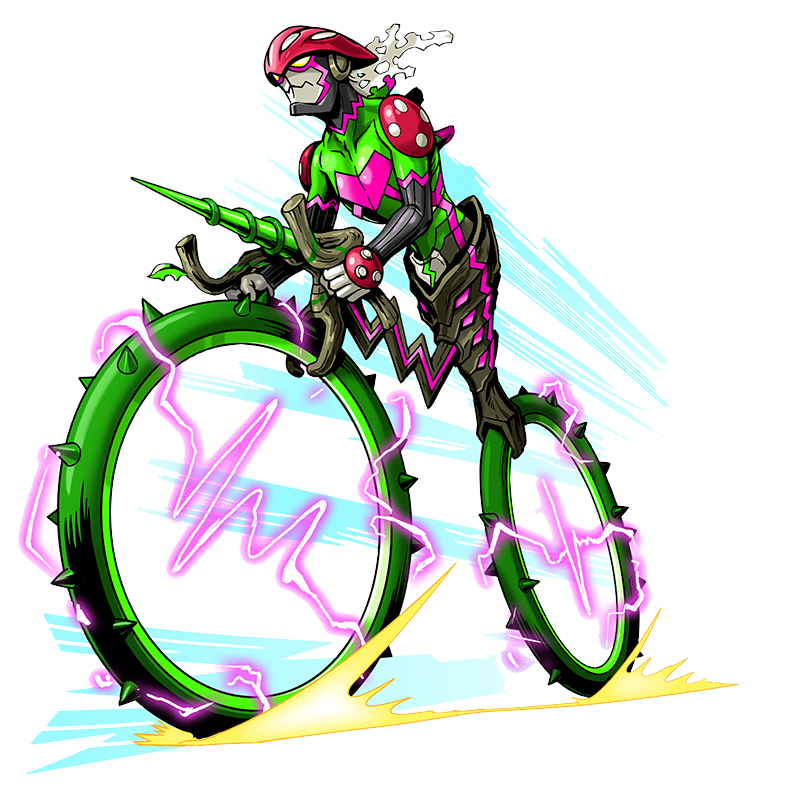 Ha ha, "pist." Actually, not a bad play on "piston" and "pistil," since this bike-riding Digimon is a new plant type! It's a really unique design, too; another Tokusatsu-looking humanoid, but its legs are fused into a segmented, wooden abdomen almost like a wasp, from which also sprouts a wooden bicycle frame whose wheels are formed from electrified, thorny green vines! 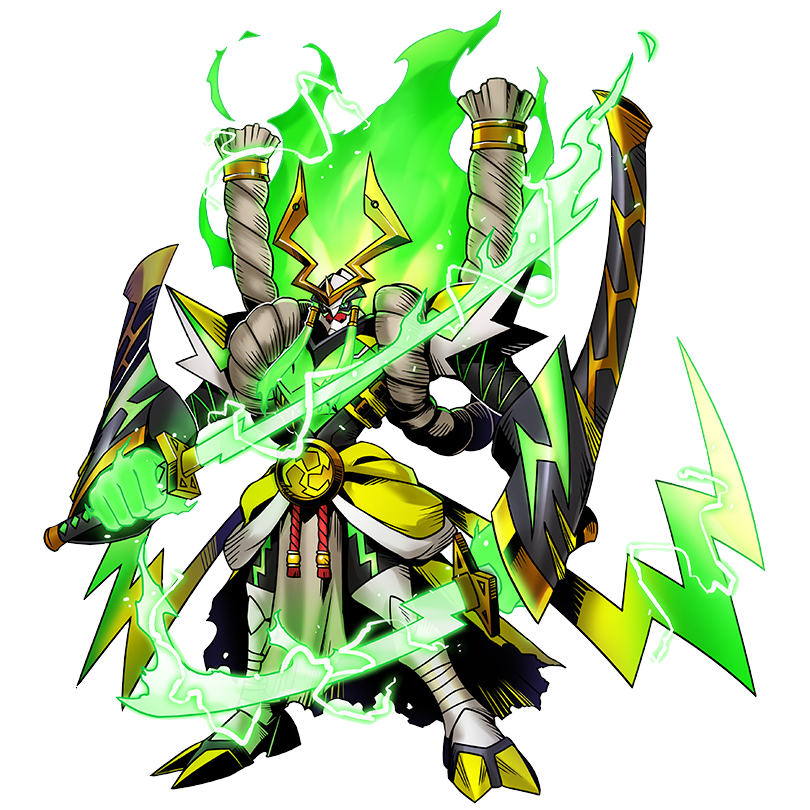 A possible Ultimate of all six Perfect stages here, Kazuchimon is a samurai-like "war god" overflowing with green, glowing electricity, not bad for what it is, but the color scheme indicates that it was designed especially with Pulsemon in mind, and again, it really shouldn't have dropped the Saurian angle. 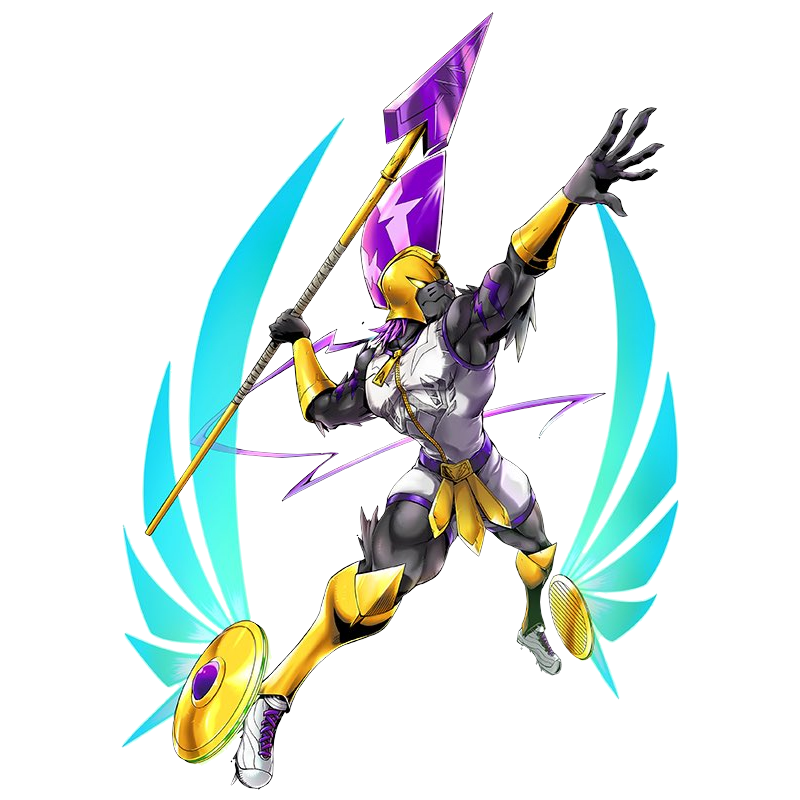 Hmm...another armored guy, huh? Guess it represents Achilles, with a lion-like muzzle poking out from under the helmet. Guess that'd make this one work as a possible Leomon Ultimate too, wouldn't it? Not my style, but competently designed for what it is. 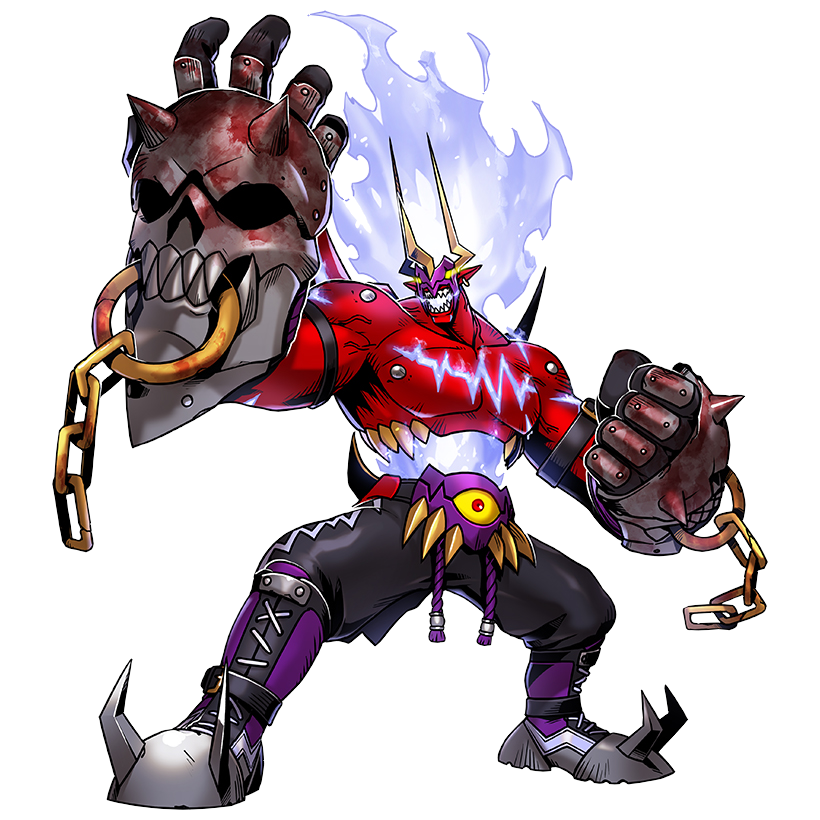 A much cooler choice for your inevitable humanoid Ultimate is this huge, raging red demon, torso simply floating in the huge, pale blue flame that spews up from his pants and out of his head. The massive, obviously blood-stained metal gauntlets, shaped like skulls with giant chains in their mouths, are perhaps the real draw here.

While this one is fairly cool, however, our last Pulsemon evolution is an INCREDIBLE concept and surprisingly very "bogleech.com." 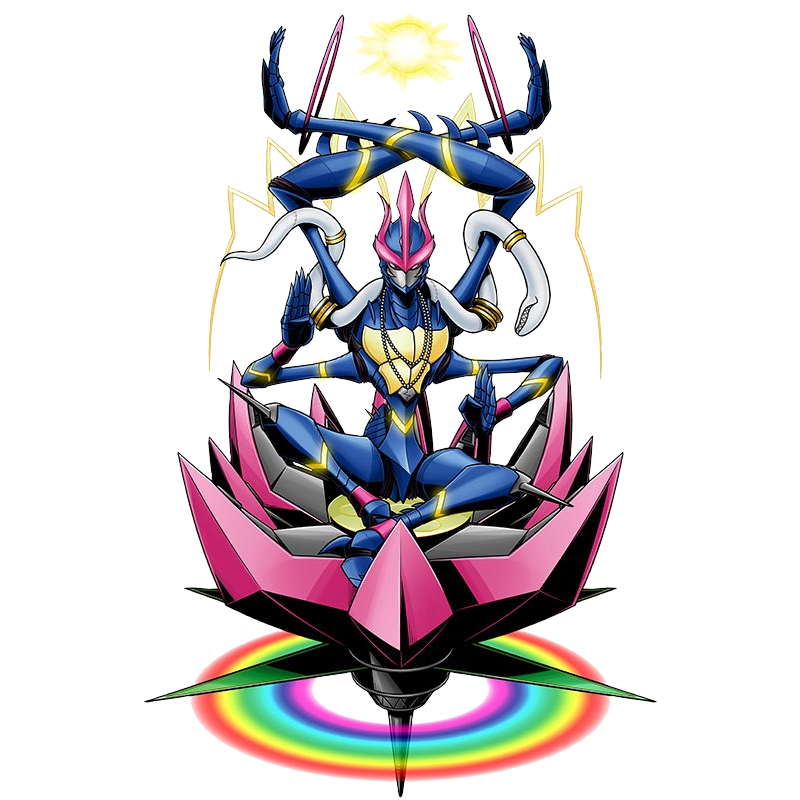 So at quick glance, Shivamon is just another humanoid superhero-style insect Digimon, though the enlarged and spine forearms, upturned little abdomen and purple triden horns seem to denote a preying mantis theme. It's also perched meditating atop a floating, mechanical lotus flower, and then...wait. Waaaaiiiiiiit....!!

While the god Shiva is often portrayed with a snake draped over their shoulders, this "snake" is entirely white, scaleless, and has no eyes. You know, more like some kind of worm.

...What kind of worm would be draped over an insect? Especially a colorless worm? With a sinister, toothy smile?

Well, I'll spare you any gruesome images, but nearly all arthropods suffer from some species of parasitic nematoda or, more significantly, nematomorpha, which are also known as "horsehair worms." The adults of these parasites reproduce in water, and if the host insect isn't already aquatic, the parasite simply compels its victim to dive into the nearest lake, usually drowning as the worm erupts from its body.

If you've any doubt that this is what we're seeing here, there are in fact multiple youtube videos of nematomorphs emerging from preying mantids that have gone viral over the past few years, including on the Japanese side of the internet.

There's the fact that Shiva is a figure in Hinduism as well as Buddhism, which center heavily on concepts of enlightenment and spiritual ascension through the cycle of death and rebirth.

Know what else is associated with death and rebirth? The lotus flower.

Know why? Because lotus flowers rise up out of water.

So the imagery we have here is of an insect that has reincarnated as a god, rising back up out of the water in which it must have seemingly drowned, casually wearing the thing that killed it on its shoulders like a tame pet.

There has never been, nor can there be, a more powerful aesthetic flex for an insect-based character. The bug-person on display here isn't even to my usual taste, but for the execution of this whole concept and its parasite friend alone, I have to give it my gold rating. The worm even has stitches on it! I love the Digimons with arbitrary stitches!!