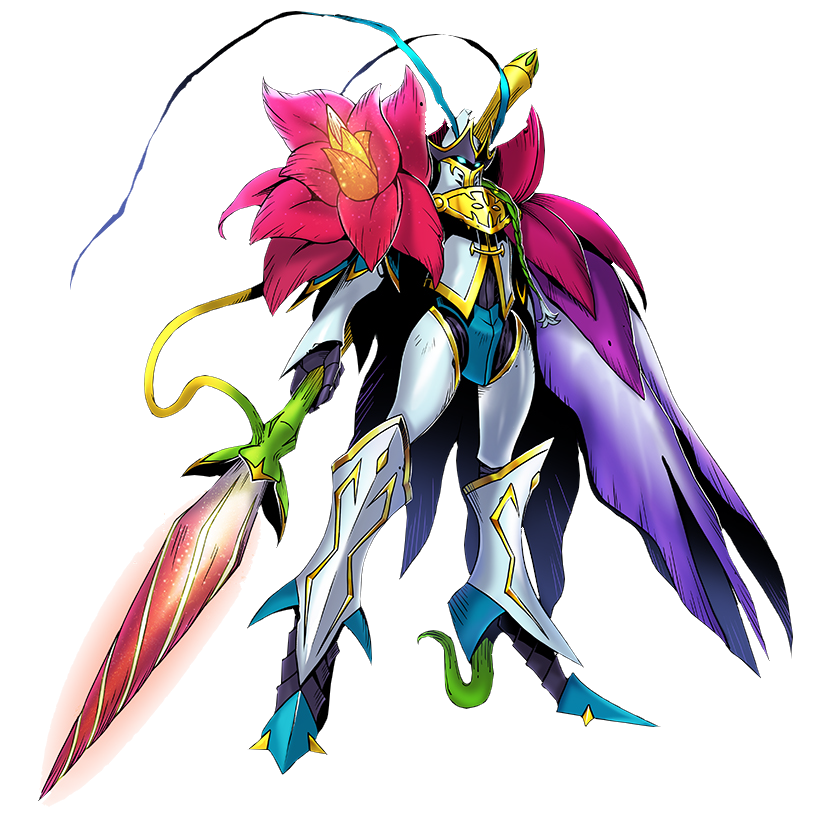 So we've finally FINALLY been given more Ultimate stage plant Digimon that aren't based around Rosemon, and the first of two is also officially my favorite knight-based Digimon. There are a lot of knight based Digimon, to the point that I've expressed how repetitive the theme feels, but even twice as many knights could never dilute how cool and distinct this one is! The base of the design is a humanoid in holy looking white and gold platemail with ominous, glowing blue eyes in the darkness of its visor, but the unusually long legs are structured more like those of an insect than a human, and two ribbonlike, electric blue antennae add to the insectoid feel. A green vine emerges from under each of its boots, however, functioning almost like stiletto heels, and an enormous flower sprouts from its back and shoulders; a compact corona of pink petals on one shoulder and a "cape" of longer, bluer petals concealing its left arm entirely, assuming it has one. With its free hand, it wields a sword that's actually a huge flower bud, petals tightly coiled into the "blade" of the sword and a hilt that continues into a long, green stem that connects back to the main body!

The longer you contemplate its elements, the more obvious it is that this seemingly humanoid design is just a plant creature growing through a suit of armor, and yes, we're informed that the "sword" can "bloom," which I shouldn't have to tell you unleashes an energy beam! Of course it does!

The combination of something traditionally "cool" with something just considered "pretty" is virtually always twice as badass. Flowers, butterflies, rainbows, swans, ballets, lacey doilies... mash any of these up with some kind of warrior, a dragon, a giant mecha, a vampire, a demon, anything THE MAN tells you shouldn't have glitter on it and you've instantly got something great. This is just a really lovely character design and a really novel creature design!

But even this has nothing on our next entry...