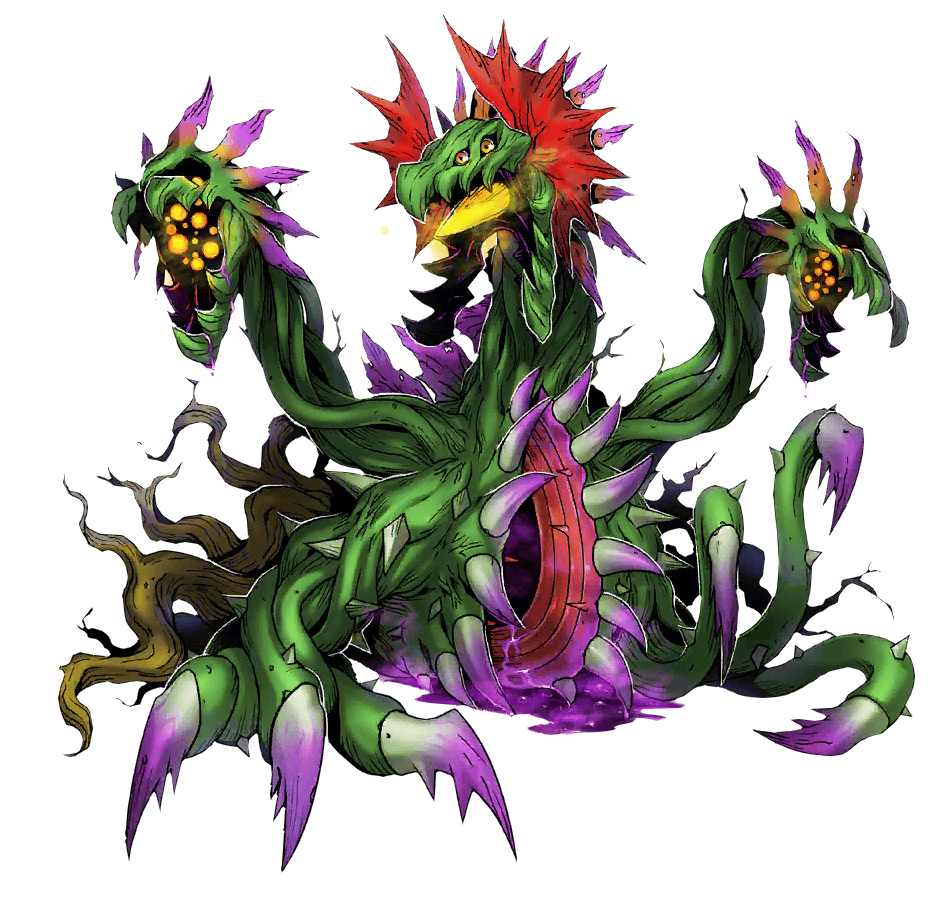 YEAH, our Digimon reviews have CUSSED AGAIN! And I swear "holly" was an accident but I guess I had poisonous plants on the brain, so I stand by it! A jolly holly shit to everyone!!!

I said something like this about Double Raremon, but we've all been waiting over twenty years for a Digimon like this one. It's the first non-humanoid, Ultimate stage plant in the franchise that actually resembles a plant, a real actual plant MONSTER as fully evolved as a Digimon is ever normally supposed to get!

Most of this creature's body is a terrifying, gnarled mass of roots and vines, some of those vines twining together to form a reptilian looking, clawed arm, almost its entire front is a gaping, yonic fly-trap maw and it has three grisly vegetable-dragon heads! The outermost heads are hollow and eyeless, unless all those little yellow lights inside are eyeballs, while the central head has four small reptilian eyes, spiny red frills, and a split lower jaw that I personally consider its most CRUCIAL design feature. Not only do these jaws evoke the skeletal structure of a snake's skull, but it's just the thing to break up what would otherwise be a more conventional reptilian head, and oh yeah, where else have us monster nerds seen such a nightmarish, tentacled heap of chlorophyllic reptilian blasphemy, weird jaws and all?

Most Godzilla kaiju have intentional Digimon counterparts, but Digimon had already been old enough to drink for a few years before it finally found its Biollante.

You better believe Hydramon has lore to match its looks: it's a hideously corrosive, hideously toxic abomination that dissolves everything it comes into contact with and even melts down the surrounding terrain itself into a toxic swamp where "ominous flowers grow abnormally." They either remembered that almost all carnivorous plants come from swampland or they just thought swampland was where scary plants generally belong, and either way it's a win/win for us at home, right?! Of course it can also spew the same toxic acid or "Biotoxin" as a gaseous breath weapon, but for good measure its heads can fire energy beams called "Scatterblasters" and the rapid growth of its vines can actually generate earthquake-like fissures. It's BIG!

And just look how many perfect-stage Digimon were scary plants. Okay, three of them are almost as new as Hydramon, but I hadn't even fully realized the lack of scary plant Ultimates until reviewing Entmon and Toropiamon more recently, lamenting that neither of these noxious and sinister botanisaurs could really evolve into anything aesthetically congruent. I guess they had one locked and loaded the whole time! If you prefer to think of Hydramon evolving from Entmon, you can even imagine that the little motes of light in Hydramon's design are more "bugs" lurking in its foliage!

Even the child-stage plants (and our lone fungus) in this franchise make perfect sense to culminate in Hydramon, and obviously so do the two Adult stage "weed" monsters! Now the only problem is that this many monsters shouldn't have to share one Ultimate. Hydramon is a beautiful gift to them all, but underlines how odd it is that there were so many years of Chlorophyllic critters roaming the Digimon world before any of them ever have the option to grow up without emergency bra shopping.

There are still plenty of untapped ways to do a large, frightening vegetable. We could definitely use an Ultimate stage cactus monster, a more flower-like carnivorous beast would be plenty welcome, there's pitcher plants and sundews to consider, mossy swamp beasts, seaweed serpents, some kind of giant flesh-eating watermelon, you name it! Hopefully, Hydramon just won't be the last Ultimate digimon that could sing Mean Green Mother and mean every word literally.

On a final note, how cool is Digimon's fancy new botanical knight, queen and dragon triad?