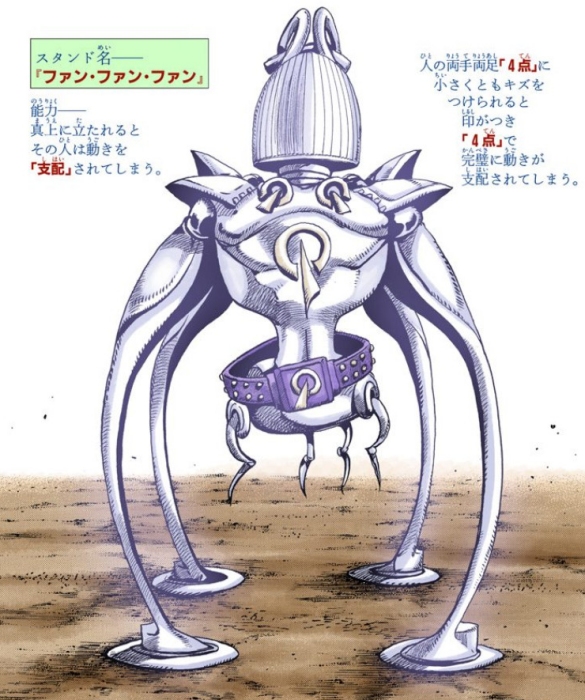 This stand's design is incredibly cool. It's another legless humanoid-esque thing, but you can see how much stranger it is than Grateful Dead and other monsters of this type. Its eyeless head is based on a lemon juicer, it has an oversized belt hanging barely on its globular pelvis, it has tiny, spidery limbs where it would have legs, and its four arms end in stethoscope-like suckers. That this thing is almost pure white is all the spookier, like something carved entirely from marble...or maybe a gigantic tooth.

Fun Fun Fun's ability isn't easily demonstrated by visuals alone, so here's the song it's hilariously named after instead.

Fun Fun Fun's powers only work so long as someone is directly below it, such as one floor down in a building, and activate only when the victim sustains enough of an injury to bleed. Wherever the target has been cut, the stand gains control of that body part as if through an invisible puppet string, and uses those stethoscope-like feet to listen for its victim's location and remain above them.

If this sounds difficult to set up and easy to thwart, then you're correct. Nothing will happen as long as you aren't bleeding, and the connection is broken as soon as Fun Fun Fun loses track of where you are, either because it can't pinpoint your location by sound or because the layout of the room above you is different enough to get in its way.

None of this makes Fun Fun Fun any less disturbing when the circumstances do line up, or any less cool, and everything about this entity, from its abstracted design to equally abstract functions, is undeniably cool as hell.