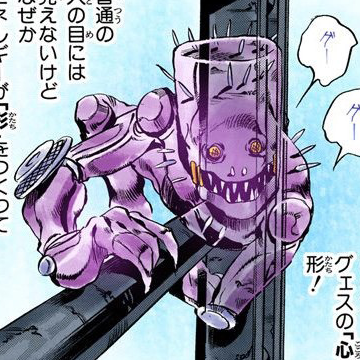 Goo Goo Dolls is a simple, but pleasingly monstrous-looking stand. According to the author, it was inspired by the appearance of a mummified monkey, and I can certainly see some monkey corpse under its biomechanical exterior. How cute is it once you know it can only say the word "goo" and that it's only about two or three inches tall, though? Sometimes, something that's both horrible and tiny is even more precious than something that's both nice and tiny. Just look at any dog under two feet long. 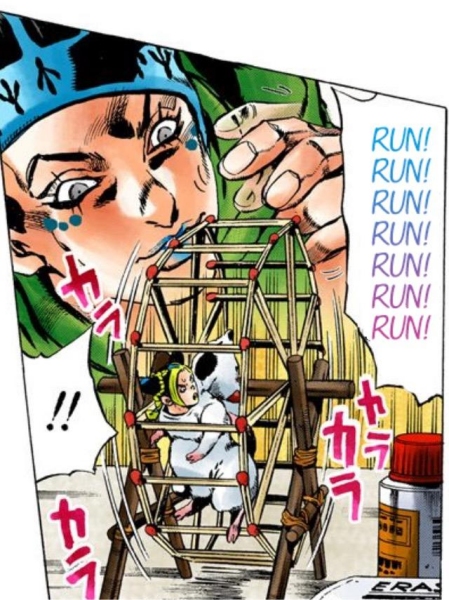 Goo Goo Dolls's only real ability to shrink people down to its own size, which is certainly scary on its own, sure; not only can this nasty little monkey-ghoul tear you to bits on its own terms, but you'll have to deal with all the other helplessness and disorientation that may come with a mouse-sized existence. Once more however, the true horror lies with the stand's creatively twisted user.

This user, Gwess, is introduced to us with a "pet bird" that turns out to be a shrunken-down human wearing the skin of a pet bird, which Gwess eventually kills for its inability to fly or produce the correct bird-sounds. This seems to have been a long term habit of Gwess, since she owns several other tiny animal skins and has the heroine, Jolyne, wear the skin of a rat.

The best part may be that such a demented creep is still not 100% villain. Sometimes the enemy of your enemy is your friend, and sometimes a murderer who keeps human pets in hollowed-out animals is your friend.