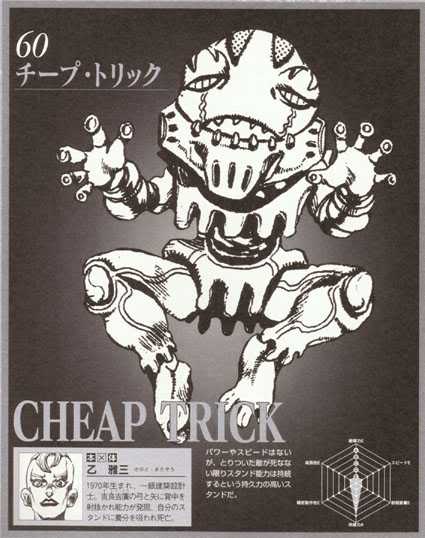 One of my favorites and one of the first Stands I ever learned about, Cheap Trick is a nasty little infant-sized humanoid with an oversized head, sad bulging eyes and sucker-tipped digits, overall making me think of some sort of biomechanical tree frog. There's not much else to say about the design, but it works well for the being's behavior and personality... 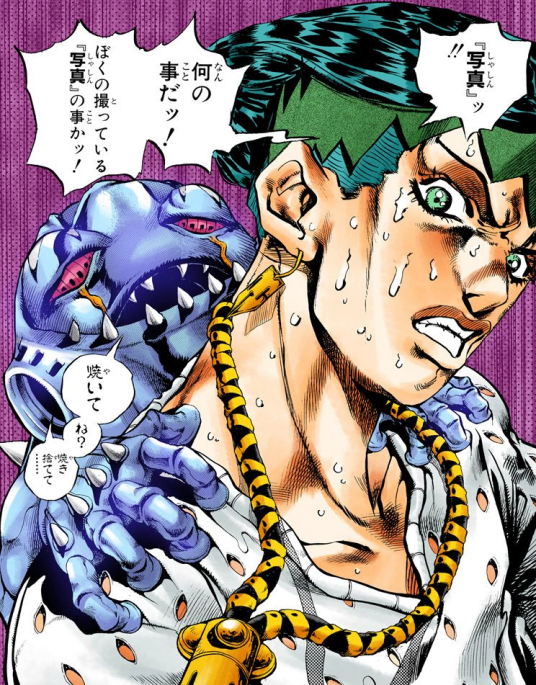 Cheap Trick's name couldn't be more appropriate, as this is a stand that only does harm to its own user, and while any injury is usually shared between user and stand, Cheap Trick has what is indeed a very cheap trick to keep itself going.

With its powerful suckers, Cheap Trick clings with an unbreakable bond to its user's back, invisible to everyone else, but unusually for a stand, completely audible to even non-stand users, human or animal alike, who automatically understand its speech. Speech, in fact, is something Cheap Trick takes great pride in, and personally considers its primary ability. Since most people believe its user is doing the talking, it can get them into just about any trouble it wants, at one point even convincing local dogs and cats that its user abuses animals.

Cheap Trick's ultimate goal isn't just to ruin someone's social life, however; it eventually seeks to change users, another ability unheard of in other stands, and it can jump hosts to another through their direct line of sight, meaning that the new victim just needs to see the host's back to "catch" Cheap Trick like a parasitic disease.

We've mentioned before that stands are directly linked to their user's very "life force" or "spirit," which is why they normally share everything that happens to them...so what actually happens when somebody's stand "leaves?" 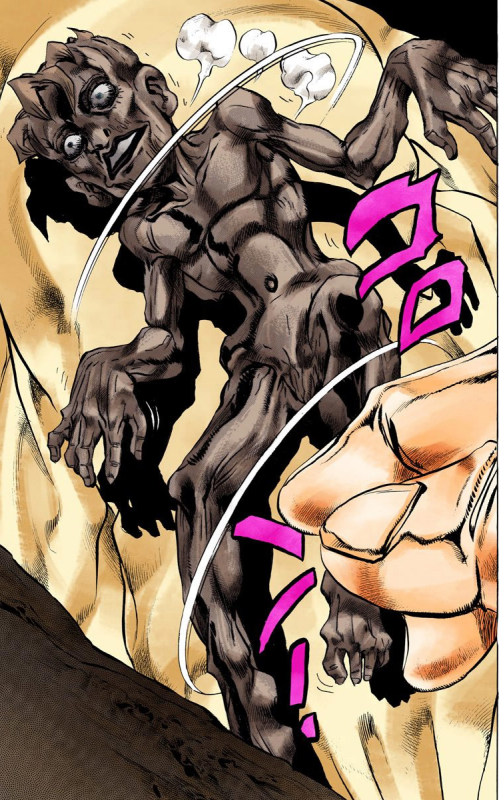 By detaching from its user, Cheap Trick simply takes their life force with it, which, it turns out, instantly reduces somebody to a miniaturized mummy. This of course forces its user to desperately hide their back from view, as was the case for its original user, an otherwise harmlessly wimpy if somewhat sketchy businessman, who at one point crab-walks down a staircase in a direct reference to The Exorcist.

Once again, we have a horrifying being with a few boundaries that give its victims a means to sort of keep it under control, but with just enough difficulty to up the suspense, and the way it defies what we already know about stands really shows off the true fun of fantastic settings. Why even establish rules for how your "magic" works if not to break them all in fun, twisted ways?