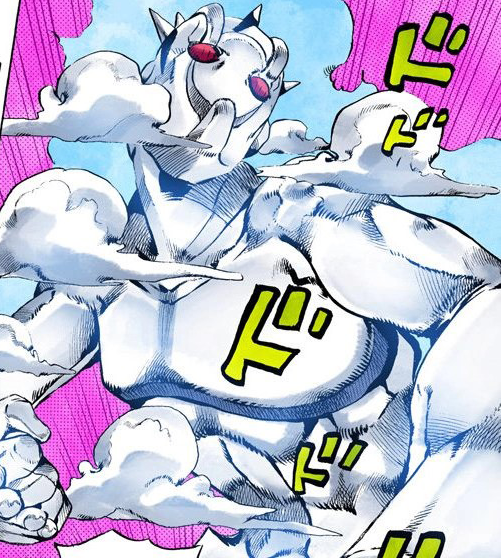 Heavy Weather isn't a stand that looks like much. In fact, of every single stand we'll have covered this October, it easily has the plainest and most underwhelming design of them all; just a giant, muscular, pure white humanoid. Even its default ability isn't much to write home about; as the name implies, this stand controls the weather. Powerful, but something we've all seen before.

It's the stand's ultimate, more "advanced" power that made me save it for the very day before Halloween, and if you're not familiar with the series already, you can't possibly guess what this thing can do. In the end, the simplicity and prettiness of the design only provide a more fun contrast to one of the weirdest, creepiest things in the series, earning its aesthetic an at least neutral rating. 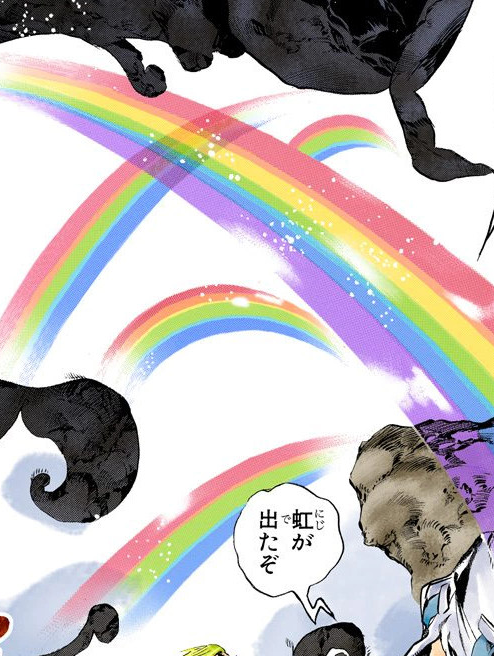 Weather Report's human user is actually also named Weather Report, and when pushed too far, his stand upgrades into a form referred to as Heavy Weather.

Heavy Weather has all the same weather-controlling capabilities as regular Weather Report, except that it also has an unseen effect on the rays of the sun itself, which also generates an excessive number of rainbows. The scariest rainbows you will have ever read about. The altered sunlight, you see, somehow carries with it a "subliminal message" to all living things that can perceive it... 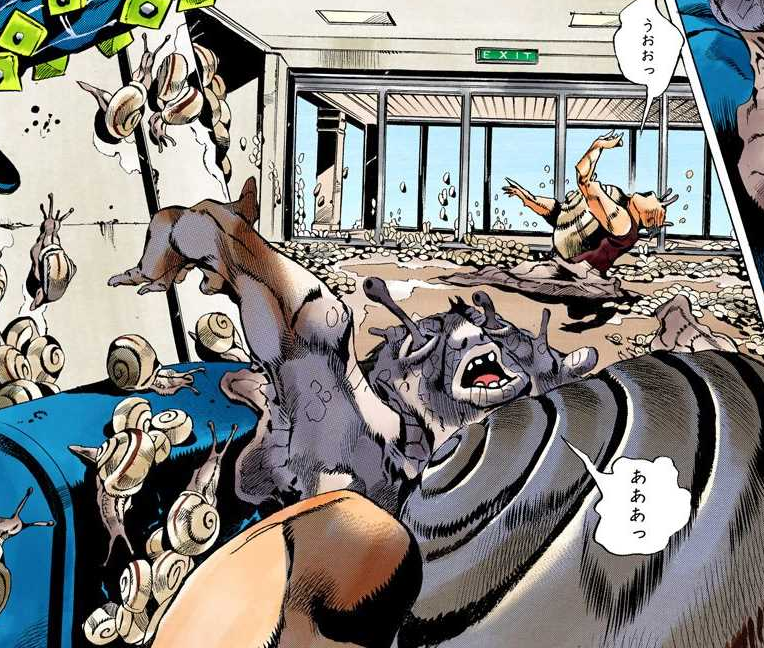 ...A subliminal message convincing those living beings that, on a subconscious level, they are in fact and always have been snails.

Consequently, physical contact with either one of Heavy Weather's rainbows or any actual snail will push the victim over the edge into actually becoming a snail, which is likened by one character to how our emotions can affect our physical health.

Enough stress can give you an ulcer, and believing hard enough that you're a snail can make you a snail. OBVIOUSLY! 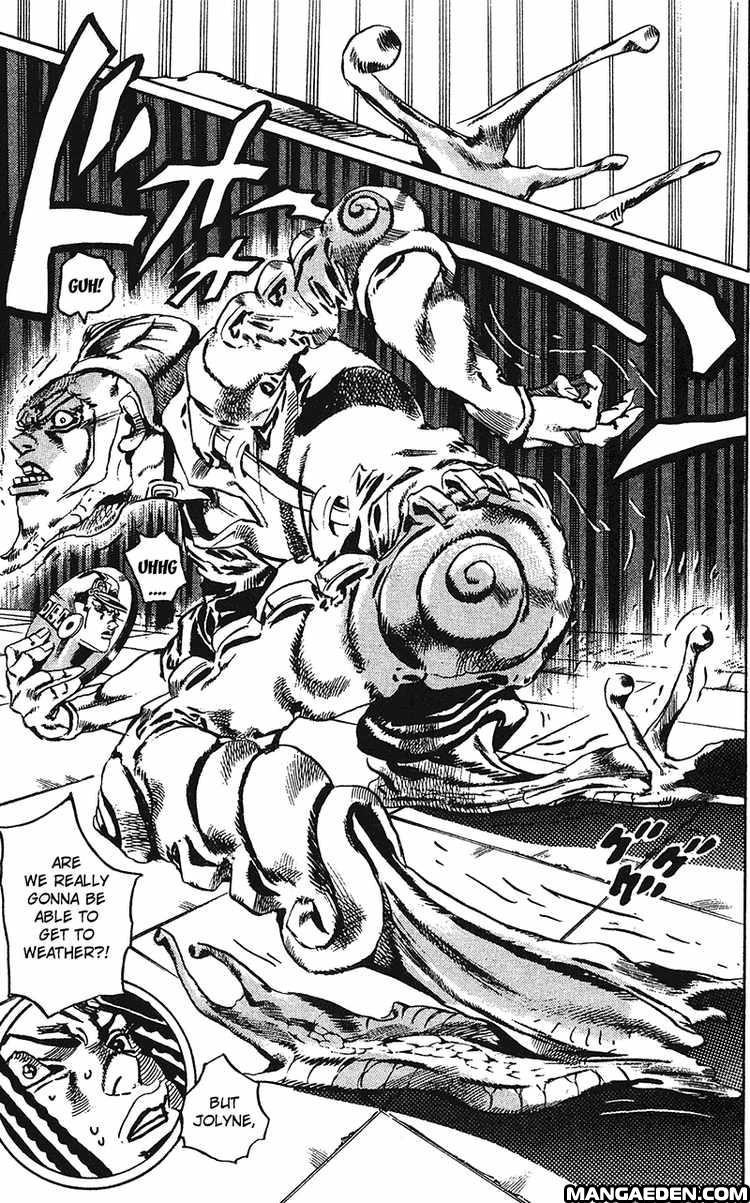 Some people change only slowly into freakish hybrid snail mutants. Others transform instantaneously into normal sized or giant sized mollusks. Still others break apart into multiple snails at once. Once this transformation has begun, though, the effects spread exponentially as any other animal touching them will also turn into a snail. 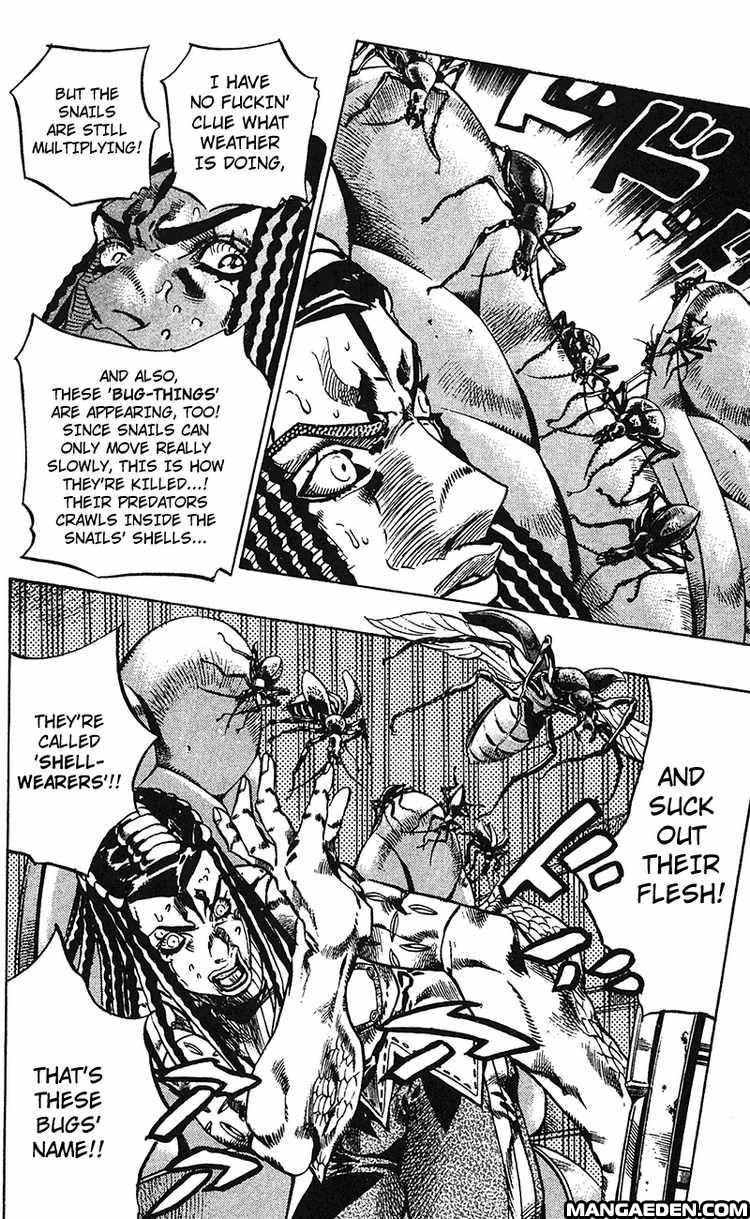 Even butterflies are seen undergoing the transformation, but snail-eating beetles - famous enough in Japan to have also inspired a Pokemon line, are never shown to be affected. They only have the time of their little lives devouring snails en masse, even setting upon people like a swarm of little teeny piranha as soon as their flesh even begins to smell a little snailish. We're never told exactly why these predators seem to be unaffected, but maybe the instinct to recognize snails as food takes some sort of priority over being supernaturally convinced of snailhood?

The one and only downside to this ability, the only thing I can criticise, is that everybody changes back to normal once the stand is recalled or its user is dead. I realize there has to be some way to reverse it for story reasons, but I'd have liked to know there was at least a possibility, if only to raise the stakes that much higher, for the snailmaggedon to be permanent under some circumstances.

I guess I'm just greedy. I want to have my snails and have them be snails forever, too.