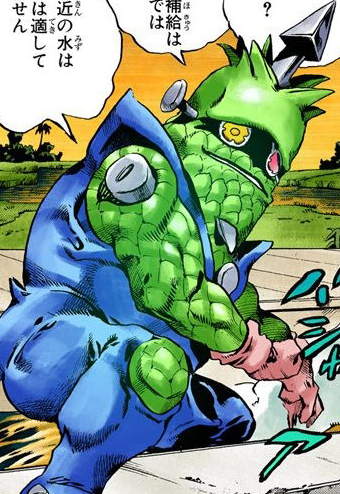 Today is Halloween, my 34th birthday, my two-year anniversy with my spouse and the very last day (or is it?) of reviewing Jojo's Bizarre Adventure stands.

The stand I've selected for this precious honor might not be the scariest looking or have the creepiest possible abilities compared to some of our others, but I know you can tell just at a glance that virtually no other stand could have been more appropriate on Halloween day.

According to series creator Hirohiko Araki, Yo Yo Ma's design was inspired by "forest fairies" from Grimm's fairy tales, but I'm not exactly certain what fairies he's referring to, as Grimm's fairy tales have been illustrated by approximately ten million different people over the generations.

The design clearly has a whole lot more in common with modern depictions of Frankenstein's Monster, but with big, fishy scales, a ridiculous giant point on the top of its head and a shape that, overall, reminds me a little bit of a big pickle-man.

Maybe some would have chosen Death XIII for the 31st, but you probably know by now that a "sillier" aesthetic better represents how Halloween has always felt to me.

And while its ability isn't too unique compared to other stands, Yo Yo Ma's behavior, and its use of that ability, is pretty damned grimm indeed. 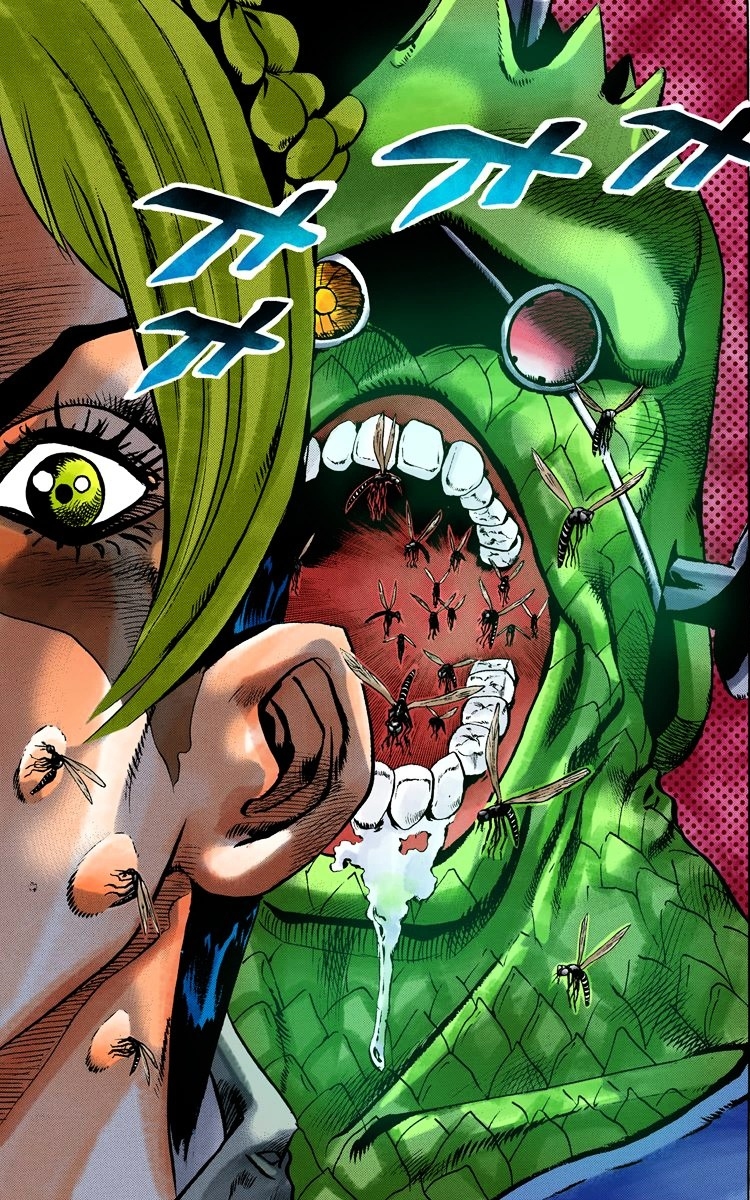 Yo Yo Ma produces highly acidic but apparently anaesthetizing saliva, capable of melting human flesh without causing any pain or discomfort. Virtually invisible traces of this substance are still volatile, and remain so indefinitely outside the monster's body. At one point, it manages to deliver its acid through mosquitoes, and even water can't dilute the stuff. In fact, Yo Yo Ma eventually booby traps part of a swamp with its saliva, eating tiny holes into our heroes as they're misted by their own motorboat's waves.

This is all pretty nasty in itself, but there's a lot more to make Yo Yo Ma an especially menacing stand. Its range is seemingly limitless, allowing it to pursue a target indefinitely while its user, a violent ex-cop, wallows miles away in prison. Its body is solid, but virtually unkillable and even masochistically delighted by pain. It also possesses not only its own independent consciousness and personality, but a deviously intelligent and manipulative one, which brings us to the one thing about Yo Yo Ma even scarier than its spit: 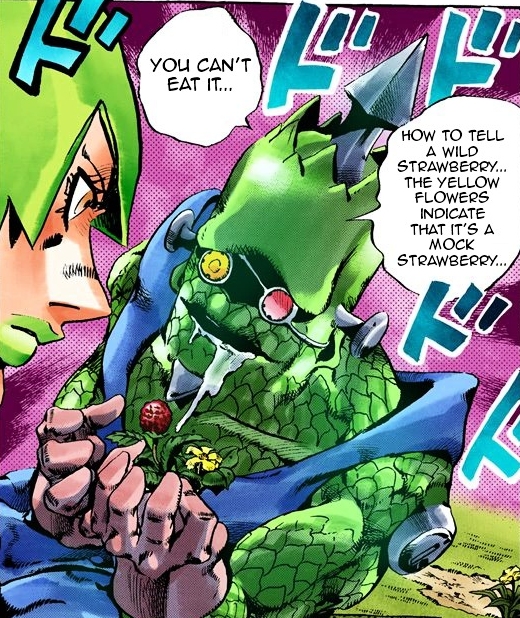 Yo Yo Ma won't hide himself as it attempts to murder you. It won't stalk you like a Jason Vorhees from the shadows until you're asleep. No, if you or someone close to you happens to become Yo Yo Ma's assassination target, its first order of business is to show up on your doorstep and offer to make you breakfast. It'll call you "master," wait on you hand and foot, do virtually anything you order it to do and offer countless ways to make your life easier even as it slowly, secretly, painlessly melts you away, one little piece at a time. 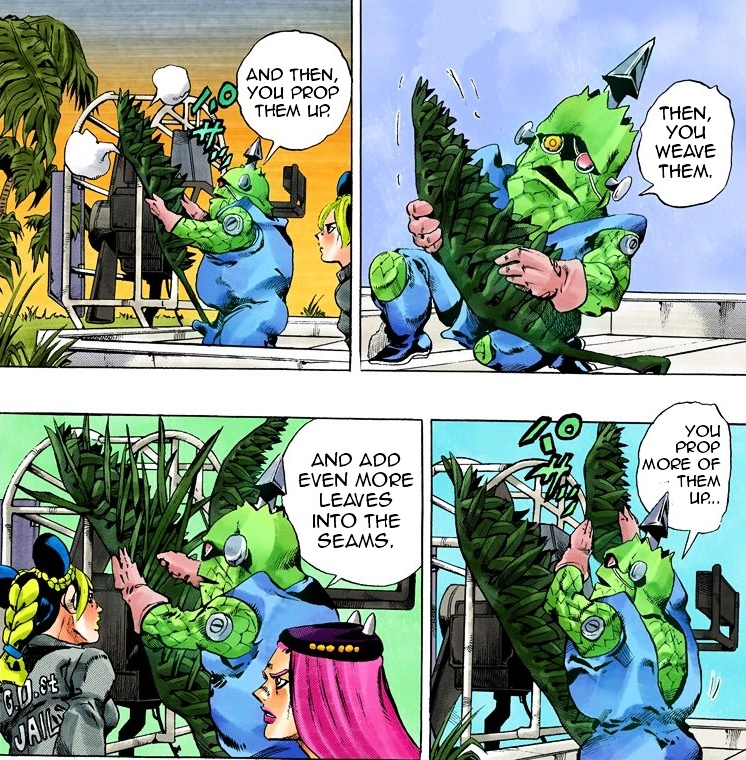 And how do you even bear to fight back?! How do you say NO to that face?! We all die eventually, don't we? Why not die painlessly while you're pampered by an awesome dick-frog butler?? 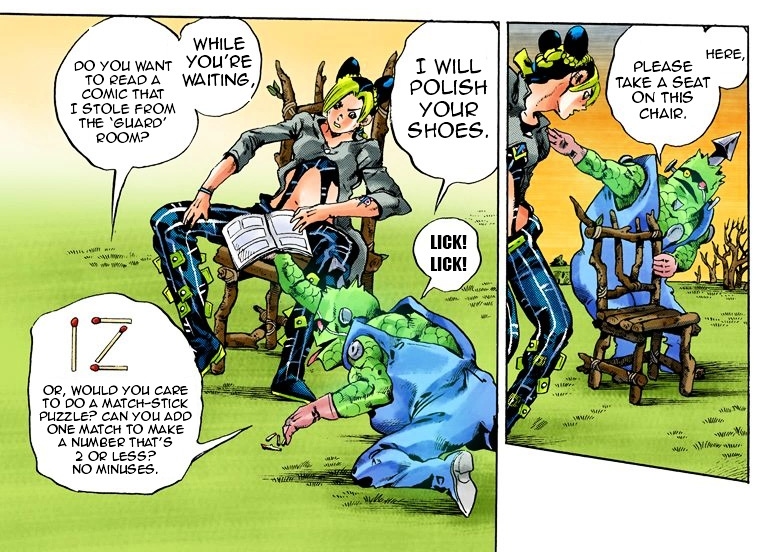