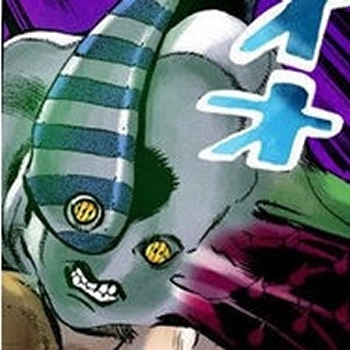 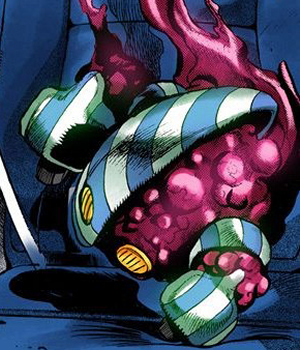 This is easily one of my top personal favorites, but we're not doing these in any actual order, so my favorites are just going to be scattered throughout the month. Notorious B.I.G. doesn't look like much initially, just sort of a smooth-skinned humanoid with a stylishly stripey half-mask, isn't seen for more than a moment and doesn't seem to have any noteworthy powers...until its own user gets killed.

As manifestations of their user's mind or "spirit" or "energy" or whatever we want to call it, Stands technically don't have bodies of their own and cannot exist without their user as a sort of host. When B.I.G's user dies, however, it infects anybody who touches the corpse or even traces of said corpse, and begins to drain their energy as it builds a real, physical body for itself. 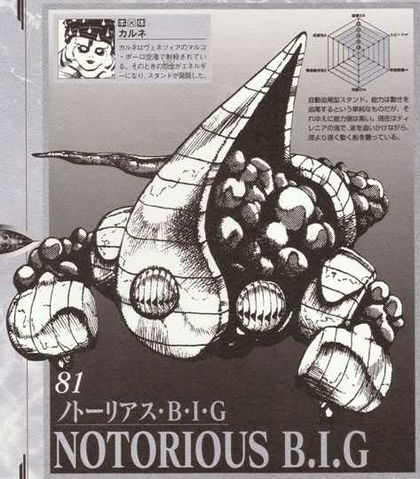 The unnatural, makeshift body of a dead man's severed spirit-summon looks pretty much exactly how I'd have expected and wanted it to look: like malformed, tumorous mess that barely knows what it wants to be anymore. It has the metal arm bracers, mask, and teeth of its humanoid form, but it's otherwise a giant, crawling tadpole-fetus of bubbling meat, mindlessly destructive and almost impossible to kill. True to the name it ripped off of a famous rap artist, it just keeps getting bigger, and pretty damn notorious to boot as it comes back again and again from seemingly certain destruction. In fact, it never does get completely defeated at all, but ends up wandering the ocean indefinitely and even sinking the ocassional ship.

Pretty much the one and only downside to this stand is that you can't be around to watch all the real fun ensue.