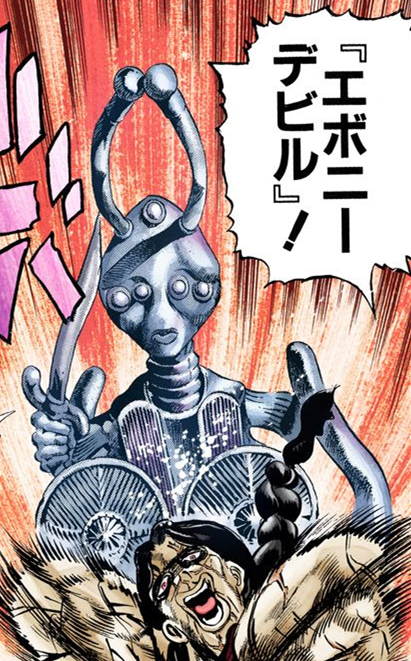 For those who read this many years down the line, today was the historic day that Burger King caved to pressure from the Pickly Rickly fandom and brought back their Lion King ketchup, or something, which has nothing whatsoever to do with today's Jojo stand, Ebony Devil! The form it manifests isn't really an original design, but lifted directly from ancient, bronze Sardinian figurines. I'm not sure whether that should detract from a rating or I should rate based on how cool looking said figurine is on its own. I think it'll just have to even out to an "alright" rating. 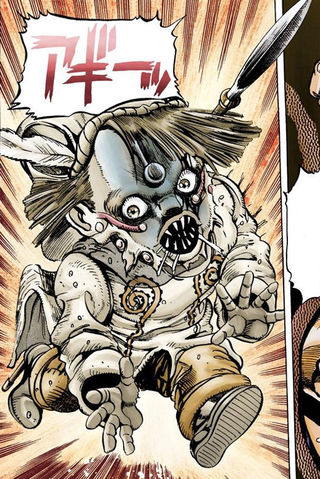 Ebony Devil's power, on the other hand, actually sort of comes with an alternate design of its own. Most stands aren't made of physical matter and can't normally interact with things as a physical entity, but this one has the power to possess an inanimate object, and its user keeps an exceptionally frightening doll on-hand for it. Once in possession of this nasty little body, Ebony Devil reveals a maniacally sadistic side inspired by the Child's Play films, a stark contrast to the actual stand's serene and serious appearance. To make matters worse, Ebony Devil is literally powered by its user's hatred, growing stronger and stronger the more hate he feels for his opponent.

I'm going to give this ability another 3/5. It's definitely cool and interesting enough to include here and has a distinct horror theme going on, but we're still going to see much, much wilder.