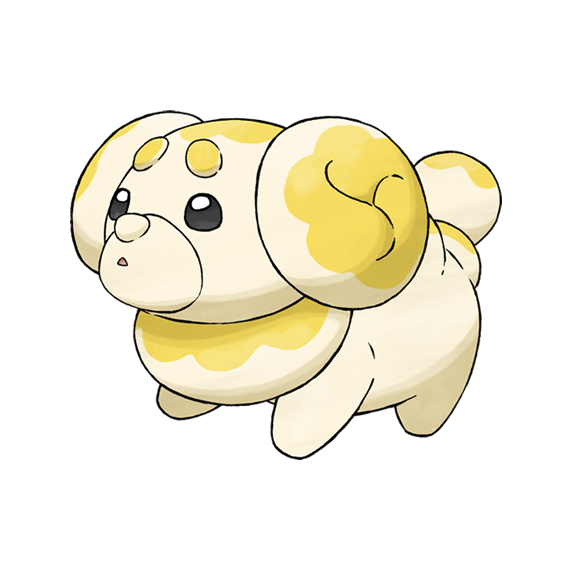 This is the first new canine Pokemon of Scarlet and Violet, which actually adds more domestic dog lines than I think any generation before it. It's also the first time, however, that I find every new dog fairly interesting, beginning with this pudgy little fairy-type puppy designed to look like it's made out of unbaked bread, with curly rolls of dough for ears. Its legs are simple nubs, it has a doughy ruff and even its little round eyebrows are lumps of dough.

It's not just a stylization of fur, either. The Pokedex says that Fidough has a smooth, moist surface and that it can ferment organic matter with the yeast in its breath. Creative and unique for sure, I really like the worldbuilding of how various Pokemon can be useful to everyday life, but remind me to never accept any baked goods in the Pokemon world until I'm certain they weren't made with a sticky dog's fungus breath. 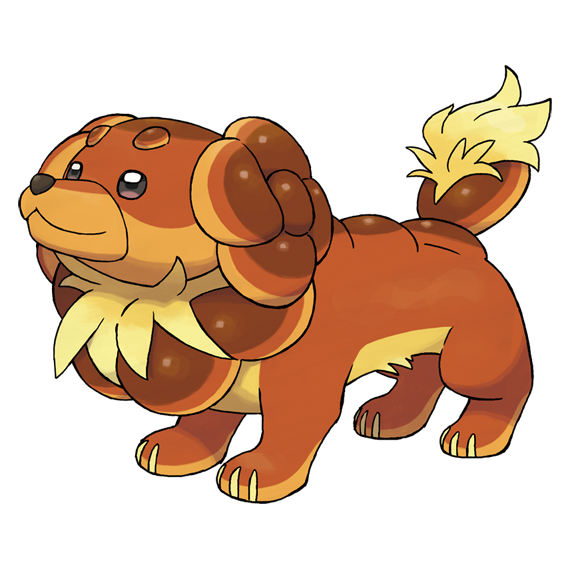 Dachsbun is Fidough's evolution, an almost realistic dachsund (what most people call a "weenie dog") except of course for the fact that it now resembles a fully baked canine bread sculpture. Unlike Fidough it also has some obvious fur, with pale yellow fluff representing "cream filling" pouring from its little round bun tail and the ring of buns around its neck.

This Pokemon apparently produces a tasty bakery aroma that helps wheat grow faster, and I like how each stage of evolution is useful to a different stage of bread production. Dachsbun also has a unique new ability, "Well-baked body," which causes it to absorb fire type attacks and boost its defense stat in the process! I'm just surprised it doesn't have a signature move that heals other Pokemon. Maybe that's just too obvious to Japanese audiences at this point, but I feel like every food-based Pokemon ought to have something along those lines.

My only "critique" is that this doesn't obviously look that much like a Dachsund, at least not as they appear in most people's memory, but its Japanese name doesn't really reference any particular dog breed anyway. Instead, it's Bowtzel, like a pretzel!