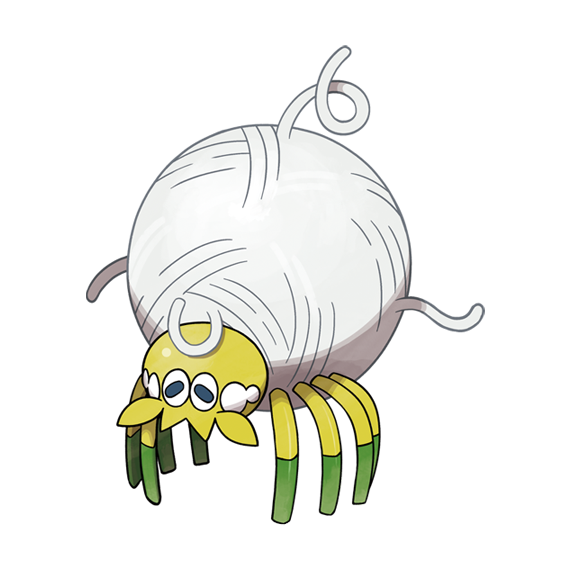 A new spider Pokemon! Excellent!! Pure bug type, Tarountula is so named because its body is wrapped entirely in a giant spherical ball of yarn-like silk, with just the head and legs sticking out. This thick silk ball is said to deflect the claws of its natural rival, Scyther!

The legs are simple, curved sticks, but remarkably enough this is the very first Arachnid Pokemon to have the correct eight legs. The head is just plain adorable, a yellowish ball with two simplistic points and two flap-shaped palps representing the mouthparts, two large round eyes with sad-looking horizonal pupils, and white markings that seem to represent a spider's additional eyes. I will say, however, that this largely yellow-tinged spider feels a little redundant with Joltik and Galvantula; they really ought to have changed up the color scheme more.

At least there's the shiny, though! I don't comment on shinies until they really stick out to me, and Tarountula's is a pretty awesome grey-black spider wrapped in an intensely red silkball! 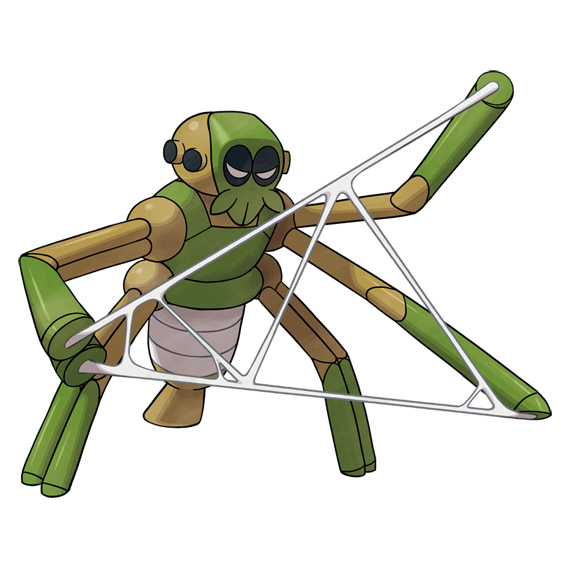 Tarountula evolves into Spidops, which I'm a little bit more mixed about, but I overall like. It drops the yarn ball gimmick, but becomes an interestingly wooden-looking spider with an abdomen designed like a spool of thread and four long limbs resembling jointed sticks of bamboo. It's sort of puppet-themed, but it also has a motif of guerrilla warfare as its torso resembles a bulletproof vest and its large, protruding black eyes resemble "night vision" goggles. It's supposedly a master of stealth, and it sets of silken tripwires all around its territory to protect against those pesky Scythers.

What's especially interesting is the combination of the goggles with the silk net it's shown stretching between its forelimbs, because this references a very specific, very cool kind of spider we once wrote about this spider in depth for Spiderween: the "Ogre-Faced" or "Net Casting" Spiders! These amazing little people hang upside-down from just a few strands of ordinary spider silk, camouflaged from other predators by their resemblance to a twig. They use their four front legs to hold a small net woven from fuzzier, more velcro-like silk that they can "throw" over passing prey, and their massive forward-facing eyes do in fact give the exceptional nocturnal vision. The eyes are so sensitive to light, in fact, that their internal tissues are completely destroyed by daylight, blinding them until they heal almost every single night!

I feel like I could have found Spidops's design a little cooler and that it could have stood to push its proportions a bit more - it has much shorter legs and subtly smaller eyes than the real animal, for instance - but I really appreciate what it represents. The combination of ballistic stealth assassin, wooden doll and sewing equipment would be disjointed on anything else, but all make perfect sense to the actual animal, playing on every aspect of its hunting methods and biology!

Once again, I also prefer the shiny to the regular color scheme, however. Default Spidops is a dull yellow-brown and greenish combination, referencing military camo but not just not all that pretty. Shiny spidops goes with a cool pink armor on an underlying black spider, and retains the intensely red silk of shiny Tarountula, which also means that its silken threads would look like "security lasers!"