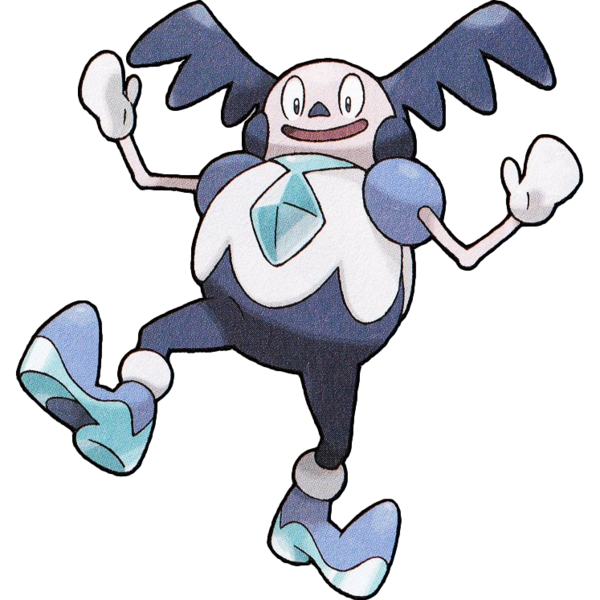 This one's not bad! I'm happy to see a Mr. Mime form, and I wonder if Mime's spotlight-stealing appearance in Detective Pikachu had anything to do with it. I think this Psychic/Ice variant is surprisingly cute, with its longer hair-tufts, wider eyes, perpetual smile and triangular nose. Its powers go from miming to dancing and even ice skating, using its psychic control over temperature to create frozen floors it can tap-dance on.

It also demonstrates why I was let down by Galarian Weezing. Just compare the above with the original flavor, also now available in higher resolution:

Galarian Mime is not Mr. Mime with altered colors and additional accessories. They're clearly related Pokemon, but almost every detail has been noticeably tweaked. The Galarian form has a larger body and legs with a smaller head and arms, new animation and even all-new facial features. This last is remarkable because the faces are almost close enough that some might have just assumed they were mere palette-swaps without comparing them side by side, but the Galar form has a fully remodeled head. Both versions express the same blank-eyed joy of a haunted clown doll, but every element - the eyes, mouth, skull structure and hair - is redone, and I think the result goes a long way to making it feel like a distinct Pokemon. 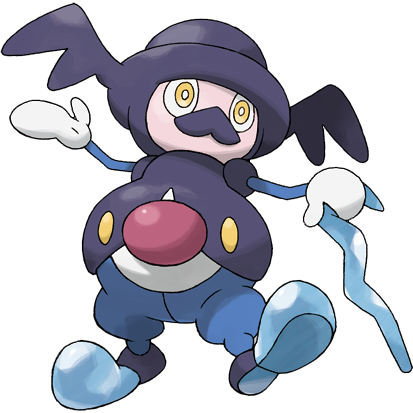 Mr. Mime comes with a whole new evolution, too, Mr. Rime, the "Comedian Pokemon." I'm not quite sure what to make of it, but, I think I'm going to go with "It's cute and it's weird, therefore it is generally good, with ONE complaint." It seems to be based on a Charlie Chaplin kind of entertainer, and interestingly, the yellow eyes on its stomach also blink in tune with those on its head. Are they real?! Is this a four-eyed Pokemon? Or if one set of eyes is fake, is it necessarily the lower pair? What if the entire upper head is fake??

The "complaint" is that this creature looks so different from Mr. Mime that it really may as well have been an unrelated Pokemon if you trim off the hairdo. To be fair, the actual Charlie Chaplin was a very skilled mime as part of his career in silent film comedy, so the idea here is very sound...but I think I'd have still slightly preferred the above Galar form as the new, stronger Mr. Mime evolution, and "Rime" as part of a new rival or counterpart family, only "similar" to Mr. Mime in the same sense that Jynx always was.