I have wanted a new form or evolution for Weezing for over twenty long, grueling years, and now that we have one.....

Galarian Meowth was SO cool and fun, and felt like a whole new Pokemon even before it evolved. This on the other hand is simply a couple of accessories stuck onto the same old Weezing, without even that noticeable a difference in coloration or markings, besides looking more gray than purple. Yes, the stovepipe hats and smog beards are a cute, funny idea, they reference industrialism and there's an interesting twist that this Weezing purifies air as a by-product of feeding on smog, which has given it our first-ever poison/fairy typing, all things I both understand and respect. This is illustrated mechanically by an ability that simply nullifies the abilities of all other Pokemon, which has made Galarian Weezing pretty popular in the competitive scene!

Unfortunately, the result of all this just isn't something I'm personally into as a Pokemon design, even having liked the "jokier" Alolan forms we got a few years prior.

I know it's cool that they defied certain obvious expectations, too, but I daresay I'd have actually liked if adding fairy typing had given us a "cutesy" Weezing. Imagine if Weezing of all things were Galar's go-to "medical" Pokemon, like Chansey or Audino in other regions. A pink, fluffy, friendly-looking monster that just happens to have a parasitic twin dangling off its face and just happens to spew (MEDICINAL! DON'T WORRY!) toxic gases from its warts. 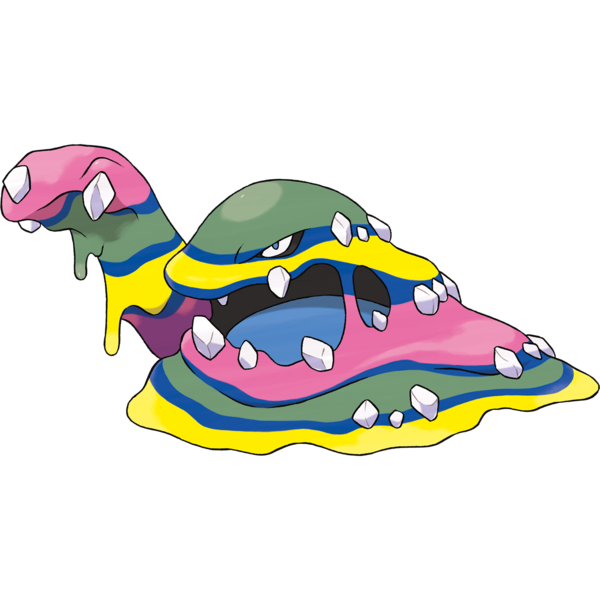 Weezing's cousin Muk, in comparison, had little more than the addition of teeth and an outrageous new color scheme over in Alola, but I still found that to be a cool looking Pokemon with a very distinct feel to it. Why this difference? I guess I can't rationalize it beyond a matter of my own personal aesthetic interests, which is all these reviews are intended for anyway.

I also have to say, because I forget if I said this before, that Koffing and Weezing's official CG models do them a major disservice by being so stiff and rigid. In the Pokemon Stadium games, this line was really throbbing and pulsing like a couple of hollow, rubbery balloons, and they certainly remembered to make Muk ooze and undulate. Poor Weezing is looking more like some kind of airborne boulder monster these days!

And since this is my last opportunity to go on any side tirades about my beloved Pollution Trio...it really blows fat chunks of something or other that this generation has a souped-up version of Weezing and Garbodor (more on that later), but makes Alolan Muk unobtainable. The first generation where I could have strategically used all three without as much redundancy, and they make it the first generation to permanently lock out any Pokemon. I WOULD have still used Smokestack Weezing solely for that opportunity!