We're in the final stretch of my three favorite types, and ghost types have been a pretty big hit with almost everybody since the first generation. True to the name, ghost pokemon are eerie, semi-corporeal phantasms frequently implied to be the actual spirits of the dead, sometimes even dead humans. How messed up is it that people in the Pokemon world know, for a fact, that there's a life after death and that it might include becoming someone else's pet?

Ghost types are weak only to dark types and to themselves. Dark types because, I guess, dark pokemon are the least likely to fear ghosts, and they're weak to themselves because their fellow ghosts exist on the same plane, obviously. As we mentioned before, ghost and normal are completely immune to one another, which is cool, and fighting moves also pass right through their ectoplasm.

Ghosts are also strong against psychic types, and they resist.....what? Poison and bug?

...Wow, you know, I never even really actively paid attention to ghost's resistances until now. I had no idea they were poison and bug. That's weird. I guess there's no reason you should be able to poison a ghost, that makes sense, but why bug? As we'll be discussing next review, bugs in Japan and especially the bug type have more of a "heroic" theme than anything else. I guess it might just be an extension of ghost immunity to fighting moves, then.

I'm sorry to put Decidueye here, I really am. It has a great design. I guess it just doesn't grab me AS a ghost type, especially since it has no obvious visual ghostliness. The others are okay too I guess, they're just so easily outclassed by the ideas and designs of so many other specters. Aesthetically, Mimikyu is pretty much a "homemade Halloween costume" pokemon, but I think there's still room for an even more classical sheet ghost...or just another twist on the concept. False "leaks" of the Sun and Moon generation once claimed we would be getting just such a monster, and that it would actually evolve into an entire bed controlled by the haunted sheet. I love that idea, and it could also offer a "monster under the bed" theme! 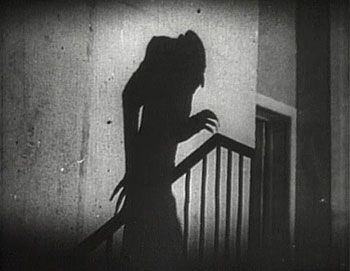 We've got Marshadow, I know, and even good old Gengar is basically a shadow monster...but both of them have one problem, and that's their extraneous third dimension. A true "shadow pokemon" would literally only be a shadow, flat and solid black and cast on the ground as though its true body is simply invisible. If that's going too far, simply giving something a perfectly black 3-d model, no shading or highlighting, would give the impression of a two dimensional shadow-being anyway.

Speaking of invisible stuff, though... Many ghost types represent inanimate objects taken over by a spirit, but a whole mess of objects simply thrown around by a spirit is classic haunting imagery I think could really work as a pocket monster. The actual Pokemon would be totally unseen, but a collection of broken furniture, dishware and clothing would orbit in its place. It might sound boring at first, but imagine the animations. The raggedy sweater suddenly swings the chair like a professional wrestling villain. Bits of furniture briefly form a catapult to hurl a bowling ball. The whole affair pieces together into a weird face or gigantic hand to express itself.

I think it'd be tons of fun...and if we really, really must, maybe the ghost controlling it all isn't so invisible. Maybe, now and then, we catch a glimpse of the spook itself, perhaps so small it can hide in the teapot or jewelry box is always seems to keep at the center... Where. The HELL. Are all the skeletal pokemon. The closest thing we have is the skull-faced Duskull, the bone-wearing Marowak and the lovely exposed ribs of Lunala, none of which are literally just skeletons. It's downright OUTRAGEOUS that we're reaching a thousand monsters in this franchise and not a single one is made entirely out of bones. The perfect typing? Ghost/normal! This one, on the other hand, I don't totally blame them for avoiding. Zombies are pretty overplayed, and to me, there's something about an animate corpse that would feel strangely out of place even in a series where I happily accept ice cream, garbage, pottery and the alphabet as monsters. Still, it would be interesting to see just how Gamefreak would approach the concept. Maybe toss in a little Frankenstein's monster and give us a half-living pokemon patched together in a laboratory? Maybe go the route of Parasect and have a sickly critter under the control of a supernatural parasite? Perhaps the best way to execute a "zombie" Pokemon would simply be to fold it into some other type of monster. In the ground type review, I talked about the possibility of a "mud monster," and as a matter of fact, the youkai dorotabou, shown here, is a distinctly ghoulish spirit forming its body from wet soil. If you ask me, a ghost/ground mud monster evocative of a zombie might fit into Pokemon's style a little better than something with genuine decomposing flesh, but then again, kids love the heck out of Plants vs. Zombies, and even Yo-Kai Watch has introduced the walking dead.

Maybe zombie pokemon are still only a matter of time...and if so, we can probably trust this series to do something fresh and whimsical with such a tired trope.