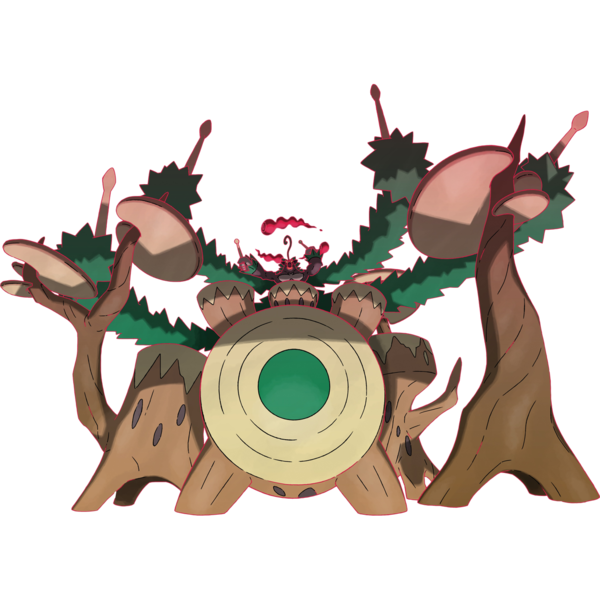 Skilled percussionist or not, I've said all I could about how little this ape "resonates" with me. The gimmick of its Gigantamax is that its tree stump drum does all the growing to become a more complex drum set, and I grasp the novelty and all, but it doesn't improve upon the creature itself. As I touched upon when we first reviewed this line, a Pokemon shouldn't only stand out because of an unrelated object it holds, unless that object is at least being "worn;" think of Cubone's skull, Dwebble's stone block or Polteageist's teapot. If it's something the Pokemon would drop if it just relaxed all its muscles, it probably shouldn't be the most unique looking part of its character design, and certainly not for a starter.

But I DO have something else to say about what we're seeing here! ENTIRELY TOO MUCH to say!

See, I don't know about yours, but my pareidolia is strong enough to immediately, irreversibly pick out a coconut-like "face" in that one tree stump, and it's sweet, surprised expression downright melts my heart. The altogether different Pokemon now conjured by my brain would have earned an easy 5/5, and would need no more than a simple, routine apectomy.

Unkong this king at once. 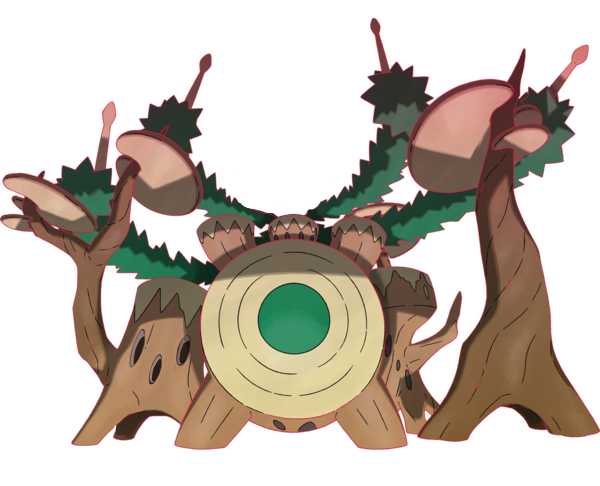 My god. It's beautiful.

Now THERE'S a Pokemon! A grove of trees that play themselves as drums with their own leafy tentacles! No need for a single addition; just emphasize the face I was already seeing! For real, this could have been one of my new favorite grass types as both a design and an overall concept. Keep it fairly huge, too, even if it isn't "Gigantamax" huge, and add ground typing, because plant life is almost universally rooted in the dirt yet we still haven't seen that combination since Torterra.

I didn't want to overthink this purely hypothetical, alternate timeline Pokemon or I might get too attached, but it's already too late... 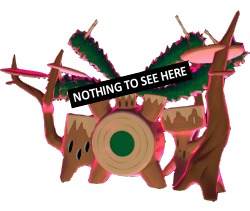 
"Disturbed by logging, a tree spirit began to communicate with humans through rhythmic vibration. Its has been called the beating heart of the forest."

"It is normally a peaceful guardian of the jungle, but when its beat intensifies, mighty quakes thunder through its expansive root network. "

We hardly knew ye, musical tree monster. We hardly knew ye so hard, we never knew ye at all...but, you know, this wouldn't be impossible as its own Pokemon, would it? Give it a few more modifications - make it look more ancient, more overgrown - and you have a distinct Pokemon that would tie into Rillaboom any number of ways. Like, maybe it's a ghost or dark type, resentful of the Pokemon that abandoned it...

"Rillaboom know to steer clear of its ominous beat. Weaker Pokemon are compelled to dance until their life force is taken."

...Maybe it was always a distinct species, and developed symbiosis with Rillaboom in a Slowbro-like scenario...

"An unruly Pokemon that can be tamed by only the strongest Rillaboom. Young Grookey are taught to stay in line, lest they become its prey."

...If that symbiosis is even so mutual...

"It evolved to mimic the drums of alpha Rillaboom, giving it command over whole troops of Grookey and Thwackey."

...Or maybe what we're seeing in Gigantamax Rillaboom is just its own imitation of the real thing?!

"Its existence was once only rumor. It is revered by wild Rillaboom, who fashion drums in its likeness."

It's never too late, Gamefreak! You've certainly done stranger callbacks! We're about to see some in only a few pages!!