As soon as you try to define it, the "ground" type really doesn't make any sense. That doesn't mean I dislike it, but it doesn't really seem to denote anything other than creatures either capable of burrowing beneath the ground, hugging very close to it, or having some sort of loose association with mud and soil, which is almost equally true of more or less any other pokemon that doesn't fly.

This type is weak against water, grass and ice, because water washes away soil I guess, ice freezes it together and plant life consumes it.... but no ground types are actually made of soil, except maybe the ones seemingly made out of baked clay.

Ground essentially has no rationalization behind it unless we're to believe there's some special kind of energy somehow associated with all the dirt beneath our feet, and that these Pokemon are in some way sustained by it, but that would be getting into "elemental magic" territory and Pokemon doesn't really like to acknowledge that it's basically a magical setting.

But, whatever. Vague though it is, ground as a theme comes with a lot of charming, interesting creatures. In fact, of the types we've looked at thus far, I feel like this one has the most solid selection of designs. Not as fantastic or varied as we get with grass or water, obviously, but there isn't really a single ground type Pokemon I don't find likable in some way.

What BAFFLES me, however, just FLABBERGASTS me, is that there's only one grass/ground pokemon, something I didn't even fully realize until this very moment. Torterra? Seriously? That's IT??? Plants live in the ground. Plants EAT the ground. Grass/ground should be one of the most common type combinations in the whole damn game.

Ground doesn't really have any Pokemon that high on my overall favorites list, but like I said, it's still solid.

I'm still gonna make myself do this, because even if I like everything in a group, there still must be those I like less than I like others. Sorry to these six, half of which I still like more than the average Pokemon of any other type, but they're all just overshadowed by some other ground-dweller.

This was tough! Tons of ground types have fun, unexpected little twists to them.

Moreso than many other types, Ground seems to include a lot of creatures you might not describe as either "cute" or "pretty" in a traditional sense but are still lovable, like a big dopey dog or someone's small grandpa. Why is there no single, elegant word for that sort of appeal in English?! The closest thing we have is "homely," which is basically just a milder way of saying "ugly." None of these are ugly!!!

There are actually only two things I've still wanted to see from the ground type... 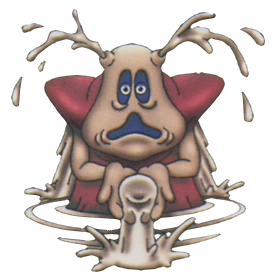 We've got a non-ground sludge pile in Muk, and a sand blob in the Sandygast line, but where's our ground/water mud-man? Is it just too obvious, too generic a concept? Dragon Quest's "Mudron" here is pretty strange and unique looking, so I'm sure Pokemon could do something fresh and iconic with wet dirt. Just combine it with some mud-loving animal, like a toad or a pig or heck, even a dog, but drippy and amorphous! 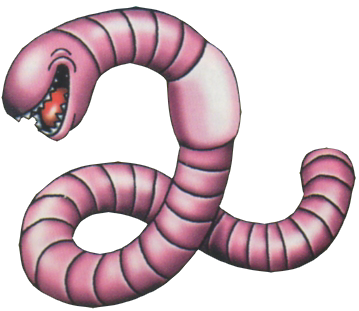 Earthworms are some of the most common, most important animals on our planet and they're nowhere to be seen in the Pokemon world. In fact, there are no worms in Pokemon. No earthworms, no leeches, no polychaetes, no nematodes, no nemerteans, no planari-...well, okay, they finally have something at least half-based on a planarian worm, but most people only notice the snake aspect of Zygarde.

At minimum, we could use a fairly straightforward and simple big earthworm, like this other Dragon Quest example, though the most ideal to me would be a pokemon made of earthworms, like Wishiwashi's schooling form. It would make more sense if the individual worms were fairly tiny and as common as the worms of our own world, but only strong as a Pokemon when they work together.