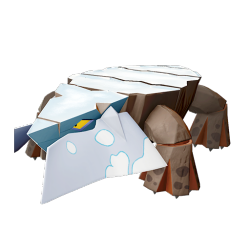 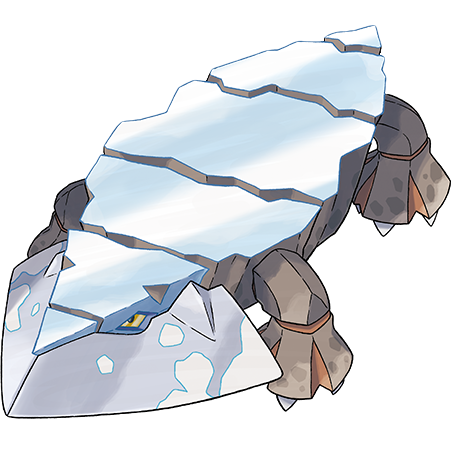 Man....poor Avalugg, right??? This Pokemon is supposed to be like this huge, tough, heavily armored iceberg beast, but its original pure ice typing still makes it double weak to fighting, rock, steel and fire, four of the most common types in the game. Ice is basically a typing designed for fast, frail attackers and can only really be "defensive" with just the right stats, abilities or secondary typing, none of which Avalugg had access to.

So you'd think its first ever variant form would be a chance to rectify that, right? Hisuian Avalagg has even more ice on its body, giving it a huge and powerful jaw, and it's also part rock type. The obvious idea is that it's even tougher and sturdier with its reinforced stone/ice combo, which is reflected in a Pokedex entry that describes its jaw as "tougher than steel."

But Pokemon just doesn't work that way. The combination of ice type and rock type makes Avalugg weak to ground, rock, water and grass, while DOUBLE weak (receiving quadruple damage!) from fighting and steel! I don't usually focus on gameplay aspects for these reviews but the type choice is just so, so poorly planned and pointless, it's impossible to ignore. To make it tougher than regular Avalugg they should have made it ice/steel, which would only have a weakness to fire, fighting and ground but resist normal, flying, bug, grass, psychic, dragon, fairy, ice AND poison! Designwise, it's still pretty cool. Avalugg was already cool, but this one takes the weird, crystal shaped "ears" or "horns" of the original and extends them into a huge, shovel-like face shield that actually splits open like a pair of insect mandibles, revealing the original jaws underneath! It seriously doesn't deserve to shatter in a million pieces the minute it touches...let's see........a fist, car keys, rain, dirt, or a rambunctious enough radish.

It looks like 3.5/5 is the most common score I've been giving Hisuian Pokemon so far. I'm just so split on almost all of them, like they were almost great ideas, or they could have been, but very few have really wowed me.