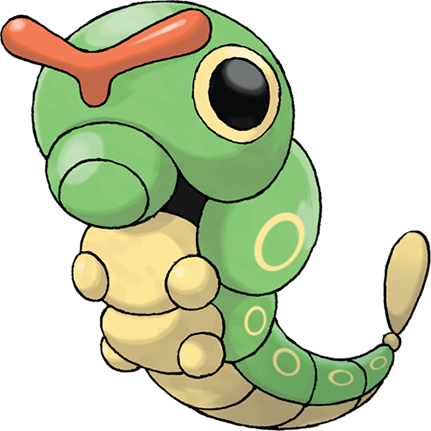 Our first precious, darling bug type, and depending on the game version, the first pokemon many players ever caught from the wild. There isn't a whole lot I can say about Caterpie as a design, however, because it's just lifted almost unchanged from a real animal: 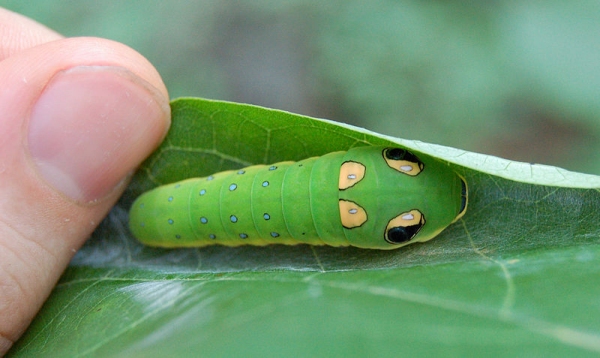 Caterpie is modeled after the larval stage of Papilio troilus, the spicebush swallowtail. This distinctive caterpillar's bulbous shape and vivid false eyes give it the appearance of a snake's head, which is enough to deter more gullible predatory birds.

When that fails, these caterpillars can also extrude a forked, orange "horn," just like Caterpie's, which not only looks a lot like a snake's tongue but stinks horribly. Pretty much the only difference between the real animal and Caterpie is that Caterpie's eye spots are its actual, real eyes, or at least emote like they're it's real eyes.

Honestly, how was anybody able to forgive Misty for hurting tiny little Caterpie's feelings like that? What an asshat. No wonder she didn't get her damn bicycle back. 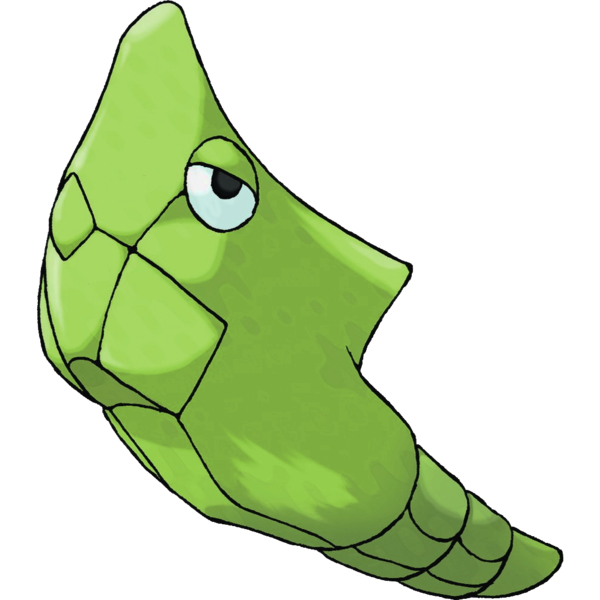 Like the real deal, Caterpie evolves first into a pupal stage, Metapod, and back when these games were new I thought it was ingeniously clever that there were "pupa" pokemon theoretically incapable of fighting, but able to keep boosting their defenses as they endured damage and gained experience points. It didn't really work that way in-game if you evolved Metapod straight from Caterpie, since it would retain Caterpie's meager attacks, but it was still a cool concept.

This is another one that just looks exactly like the real thing, except of course for the eyes, which look either sad or grumpy depending on which side of the Metapod you're looking at. 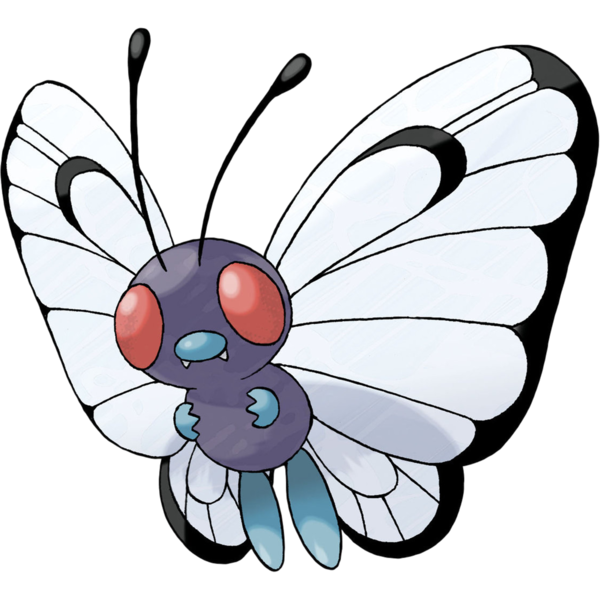 Butterfree, the first fully-evolved non-starter in the pokedex, is pretty much what we would come to expect from the bug type, a cartoonish, very slightly anthropomorphic creature with minimally insect-like anatomy and usually just four appendages. This is fair enough, since these aren't actually insects, but insectoid pokemon. Ash even says just that at one point. "They're not real bugs, they're bug pokemon." How he even knows about "real bugs" is anyone's guess, since non-pokemon wildlife flat-out doesn't exist in his world.

One thing I will say about Butterfree's design is that I wish way more bug types had those actually insect-like eyes. It's nice that a butterfly wound up having one of the most insectoid faces of any bug type in the first generation, and I love that a butterfly has tiny little fangs, too. It's actually a pretty menacing looking butterfly, when you get down to it, though it's entirely possible we're really looking at a design for a moth. More on that later.

A rather bare-bones bug type, but with classic appeal, and endearing at every evolution stage.