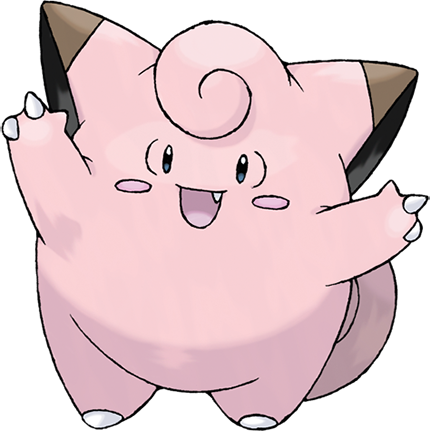 Clefairy, as some of you know, was very nearly slated to be the mascot of the franchise and Ash Ketchum's partner in crime, a role that was ultimately handed over to the slightly more memorable Pikachu. This isn't to say that Clefairy is without its merits, of course; it's billed as a "fairy," but it resembles neither what we typically expect a fairy to look like or any particular animal. It's like some entirely made-up genus of globular, pinkish mammaloid, and it's by far not the only one in the game, either. 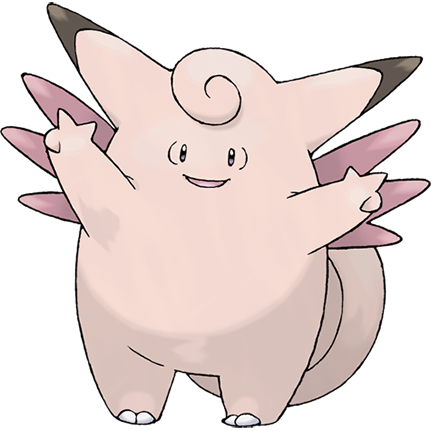 Changing negligibly when it evolves into Clefable, I feel like this line was also intended to be the poster child of the normal type, even if the first pure normal type we encounter is Rattata. Later, however, the clefs' and other pink, globular normal types would be retconned as actual fairy types, and I just want to say how grateful I am that our eighteenth and presumably final new type wound up being something as interesting as fairy and not the "light" type the fandom kept pushing for as a counterpart to "dark." The two are similar in some fundamental ways, but "fairy" just feels, I dunno, a little more monster-themed, I guess? The much-hypothesized "light" type carried an angelic, holy sort of theme that would have been far more limiting, and while the majority of fairy pokemon are cute and pretty, they've already got their share of spooks and weirdos that never would have fit into "light."

Besides...the counterpart to "dark" is fighting. The intention of the two is pretty much closer to "villain" and "hero" types. 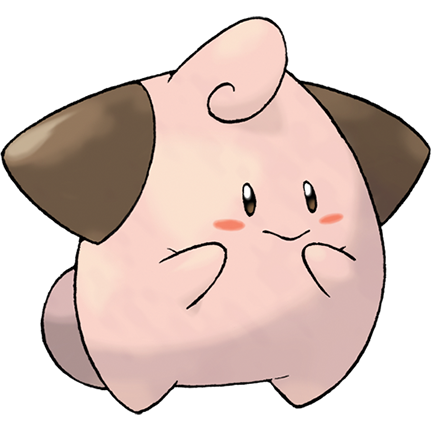 Like Pikachu, Clefairy was given a pre-evolution in the second generation of games, coinciding with the introduction of actual pokemon breeding mechanics. They sort of went hog-wild with these for the Gold and Silver games, but subsequent generations have introduced "baby" pokemon more sparingly or not at all. I could go either way on this, personally. There are pokemon who could still use a "prevo" as we took to calling them just because it doesn't make one damn lick of sense how something like a Lapras hatches straight out of an egg, but on the other hand, this is pokemon we're talking about. Why waste a slot for an entire new monster just to rectify a logical gap? I'm glad they don't toss around "babies" so much these days.

Anyway, it's also interesting that the Clefairy line is repeatedly said to come from the moon, or have arrived on our planet from a meteor. Of course, if you ask me, all pokemon are pretty obviously from space. I even got paid real money once to posit my pokemon theories. The internet is magical.

I got really sidetracked throughout this review, but Clefairy and Clefable are decent enough fluffy critters, slightly more interesting now that they're official members of the seelie court...or are they unseelie? How would we even know?