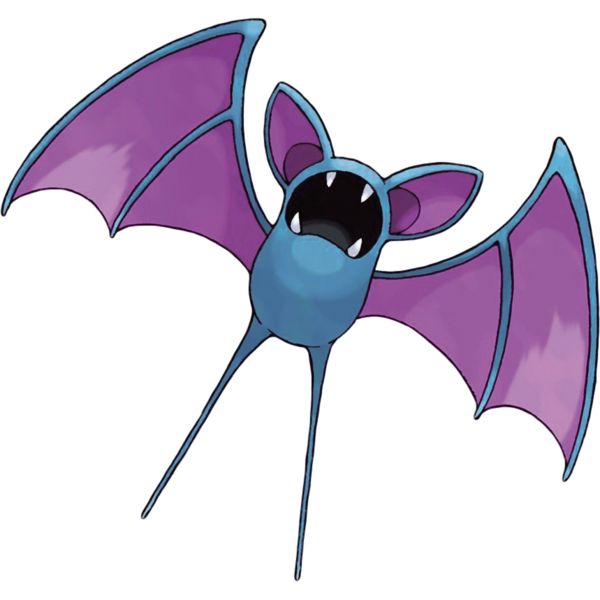 Oh man, OH MAN. We're kicking into high gear here! Zubat is pretty much the exact transitional point between the more mundane animal-based pokemon and the weirder, wackier, freakier stuff that truly defines the series. From here on out, most of these reviews are gonna be a lot more passionate and detailed, especially the very next couple coming up. I'm already getting emotional. Thank goodness I have Zubat to ease me into things.

There's a lot to love about this annoying little shit. Zubat is so common and so frustrating in the game's cave environments that many people outright resent it as a pokemon, but how can you possibly dislike this design? It's a beautiful, blue and purple, hairless bat with nothing but a horrible, gaping mouth for a face. Its total lack of eyes is so cool looking, and even feels like a plausible evolutionary path for a cave-dwelling animal equipped with sonar.

Zubat, unlike an actual bat, seems to remain in its subterranean habitat through its waking hours, so we're basically seeing a fully "troglobytic" mammal, though they're lucky that enough other pokemon (and humans) apparently wander through caves to support their canon diet of blood. It's also really neat how its legs have evolved into nothing but a pair of long, thin spines, or perhaps singular, long digits for hanging off a cave ceiling.

The last, but still significant characteristic of Zubat is that its evolutionary line remain the only flying/poison dual types in the franchise, though perhaps another case in which poison typing was simply handed out to everything "spooky" in the first generation. Poison sure isn't ever mentioned in their pokedex.

I knew this had to start happening sooner or later, but this is the first pokemon I'm going to have to rate a little differently at every evolutionary stage.

That's right, bozos! The little fledermaus y'all either hated or mostly overlooked is this feature's very first five-star 'mon. Zubat is just plain cool as heck. 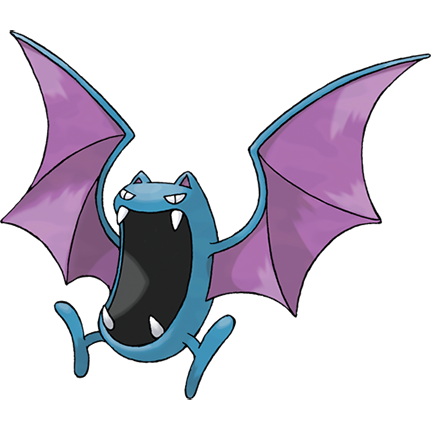 Unfortunately, this is a pokemon line that sort of steadily declines in uniqueness as it evolves. Both of Zubat's most interesting features are dropped when it evolves into Golbat, acquiring distinct "feet" and a pair of eyes. This is especially tragic considering how cool that massive, gaping mouth looks, and how much cooler it would be entirely by itself. Let me demonstrate: 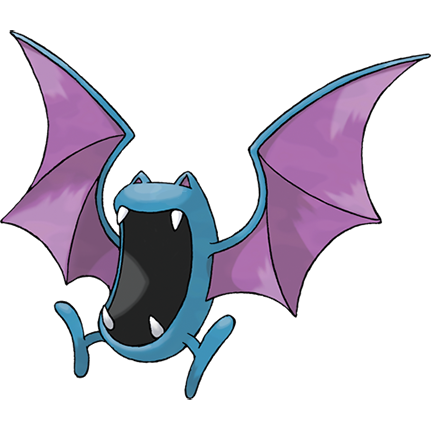 See? Doesn't that follow logically from Zubat and look totally wicked-rad? Just a big, flying, blind vampire mouth? The whole point of Zubat felt like it was dropping eyes and other superfluous details in favor of its sonar, wings and fangs, which should have been further emphasized as it evolved...and it's not the only interesting quality Golbat neglects, either. 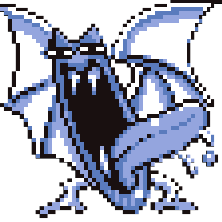 Even with two too many facial features, I loved, LOVED Golbat's bizarre red/blue sprite. The fangs looked scarier, the narrowed eyes looked eerier, and that giant, slimy tongue felt like an especially outstanding new charm point, all ready to scrape open a vessel and lap up some fresh blood, like a proper vampire bat!

I'm really sorry, Golbat, but you lose one ball for putting your tongue away and another ball for having eyes. Those are both very naughty things to have done. 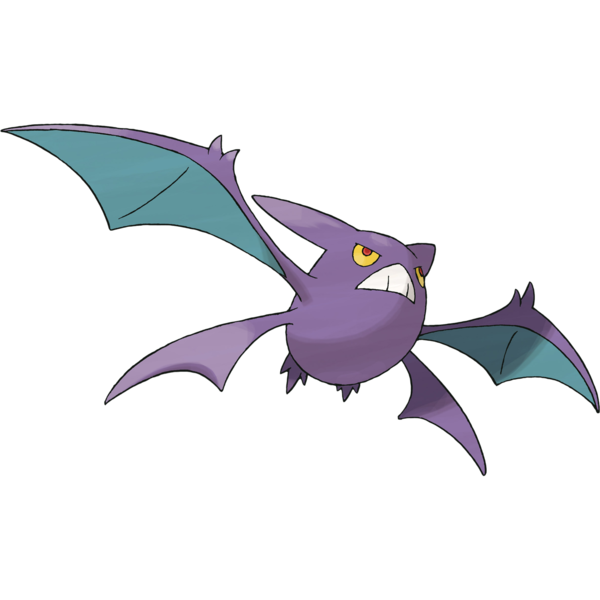 Alas, things actually go even further downhill for the poisonous bats. Since the second generation games, Golbat has evolved into Crobat when happy enough, and I can't complain about Crobat itself, because it's a perfectly serviceable spooky bat on its own merits, but I can and will complain about it as a Golbat evolution, because it leaves what little Golbat still had going for it on the cutting room floor with its relatively generic, boring face. It isn't even fanged anymore!

If Crobat weren't related to Golbat, it would be a solid three-ball monster. As the final evolution of Zubat, however, it's a massive disappointment. Rated as a whole, I'd probably give the Zubat line an overall three-ball score, but I'm still having trouble getting over the eye thing. To this day, Zubat is one of only maybe a couple pokemon with absolutely no eyes, despite how many other pokemon represent such eyeless things as corals, hydrozoans, vegetables and rocks.

God, Gamefreak, you and your damn EYES all the time. Why don't you just MARRY eyes if you love them so much!?