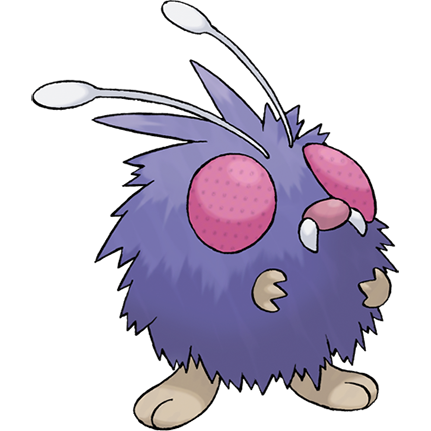 I've waited twenty long, grueling years now for the existence of a fly pokemon, but to this day, the only thing that even comes close is poor, unloved, darling Venonat, which isn't even named after a gnat in Japan, and stops being even tenuously similar to the order Diptera as soon as it evolves.

Otherwise, what we have here is a flawless bug/poison design, a scuzzy ball of hair with a buggy-eyed face, cute little mandible-fangs and weirdly fleshy, humanoid feet.

Venonat is the perfect blend of adorable and freaky. If, God forbid, Gloom never existed, Venonat here might have even taken its place in my heart as unevolved, pikachu-like sidekick material. 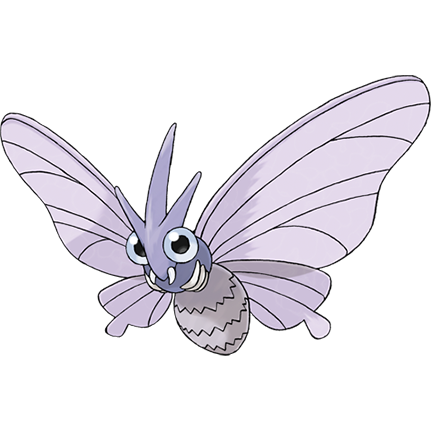 Regrettably, Venonat is one of those pokemon that evolves all willy-nilly into something it has little more in common with than typing and phylum. Venomoth's design is basically just a big, pale moth. Which I do like very much, especially as a poison type, and I even used to rank it among my top three favorites, right after Gloom and Parasect. I can't even really explain why that was, when Venonat was so much more appealing and the same generation offered things like Weezing, Muk and Victreebel vying for that same #3 slot. I guess a spooky moth called "Venomoth" just hit something really special for me at the time, and I even used a Venomoth as my avatar and more or less "character" in my first and dearest online chat community through my teenaged years.

The Donphan in the room here is that Venomoth may not have been intended as Venonat's evolution at all, because the same antennae, eyes, mouth, hands, feet, and purple fur are all shared by none other than Butterfree. Side by side, the connection seems painfully obvious, while Venomoth's eyes and horns follow more logically from Caterpie and Metapod.

That said, I'm glad this "switch" was made, because while Venomoth fails to live up to Venonat's precedent, it's still a cooler outcome for the little guy than Butterfree. There's an old adage that goes butterflies are beautiful, but moths are monstrous. More people these days seem to better appreciate how fluffy and bunny-like moths actually are, but they still feel a little more gothic than butterflies.

Venomoth gets four out of five, because it may not be as interesting as its predecessor or a lot of other pokemon, but a giant, ghostly, toxic moth is still pretty rad on its own merits.

...You know what venonat REALLY reminds me of, though? 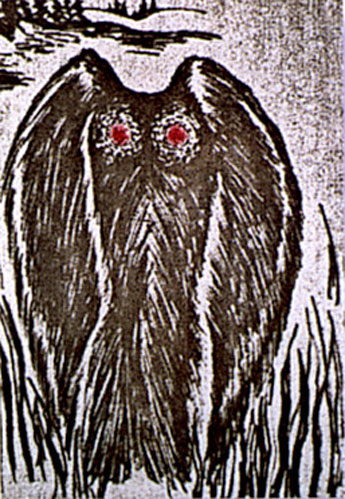 That's right, good old Mothman, the only truly beautiful thing besides the Flatwoods Monster to ever happen to West Virginia. All you'd have to do is trade Venonat's tiny hands for bird-like wings and drop its antennae, mouth or both. It could even keep the naked feet, maybe evolving into longer, ostrich-like knobbly legs. It would have been all too perfect, and could have still made sense as a poison/bug called Venomoth!