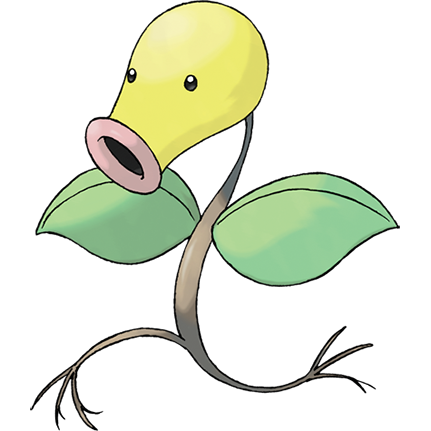 This is probably the one evolutionary chain in the first generation that I love at every stage, exactly as-is, and would never dream of messing with. Even Parasect looks very slightly less interesting to me than Paras, to be painfully honest here, but Bellsprout starts perfect and remains perfect. Look how absolutely darling this little thing is!

Bellsprout's concept is that of an insect-eating plant, though non-pokemon insects don't "officially" exist in the setting so I guess we're left to assume this waddling, beady-eyed sweetie pie wolfs down struggling, terrified Caterpie and Weedle. Adorable. 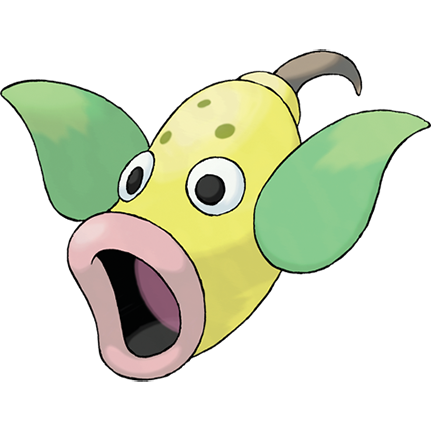 Bellsprout first evolves into WEEPINBELL, and back in the day, my adoration for this goofy thing was second only to Gloom. It was one of the first two Pokemon I ever saw in the anime, and I was immediately enamored with whatever the hell I was looking at. Just a big, googly-eyed, gaping plant pod? With leaves like giant fish fins?? WEIRD!

Weepinbell drips with an awkward, comical charm, but it also drips with gastric acid, and I love my awkward, comical monsters that are actually kind of gross and frightening. Its pokedex not only talks about how it spews digestive enzymes, but that it will use its razor sharp leaves to slice apart any prey that it can't fit in its mouth. This is one of the most violent, gruesome things the Pokedex has told us yet, and coupled with its habit of hanging by its little hook up in tree branches, it always reminded me of those monsters in Dungeons and Dragons and various other games who function more like environmental hazards or "traps" than active foes. "No sooner do you step into the eerie, quiet clearing than a cascade of viscous slime douses you from the canopy above. You barely glimpse the innocuous, walleyed face of your killer before your eyes melt from their sockets." 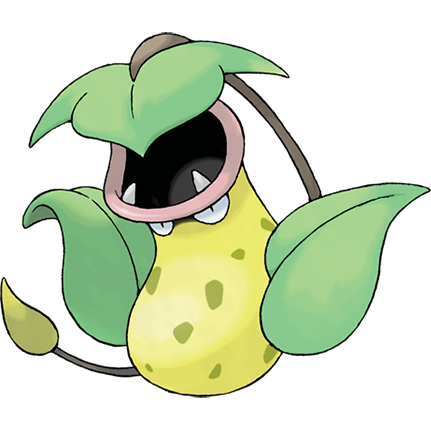 It's funny how I didn't originally connect what Weepinbell was supposed to represent until I saw its evolution, Victreebel, for a split second in the episode's Pokerap. Though I was familiar with and fascinated by them from an early age, I had never, ever before seen a pitcher plant represented in any fictional context, and it thrilled my little bionerd heart to pieces.

Seeing a cartoon nepenthes monster for the first time in my life might have been the exact moment I knew Pokemon was going to be something deeply special to me, and until I saw the likes of Gloom, Parasect and Venonat, I was sure nothing could possibly top the awesomeness that was Victreebel. This still isn't entirely untrue, because while there may be pokemon higher up on my personal favorites list, this huge, menacing carnivorous plant with an upside-down face remains undeniably one of the coolest things in the original 151.

Once again, we've also got some pretty juicy pokedex tidbits to digest, just like the bubbling remains of what used to be human beings and fellow pokemon in Victreebel's gullet! How many times has this series actually used the word "horrifying" to describe a pokemon? We're left with no question that Victreebel lures, traps and dissolves living beings, their own liquefied remains apparently making an enticing, aromatic stew for the next hapless victim.

Coolest of all is that last note about Victreebel's head-vine. The use of its little leaf-tipped tentacle as a lure was never mentioned until the third generation games, but it makes rock-solid sense out of what seemed like an otherwise arbitrary (if certainly cool looking) design aspect, and the thought of Victreebel as basically a Nepenthes anglerfish is just about the only thing that could have made me like it even more than I do already.

"My flesh is melting off my skull! Why aren't you HELPING!?" Haha, classic James.
The Bellsprout line's progression is one common to the series. It starts out small, cute and innocent, takes on a charmingly awkward but highly overlooked middle ground, and finishes off as a tough and sinister killing machine. Usually, I end up liking one of those stages vastly more than the other two, but I feel the pattern is executed better here than almost anywhere else in the franchise.

I wasn't sure whether to give these guys a regular five or my extra-special personal five, but we'll go with the latter. They were, after all, the first favorites I ever had!