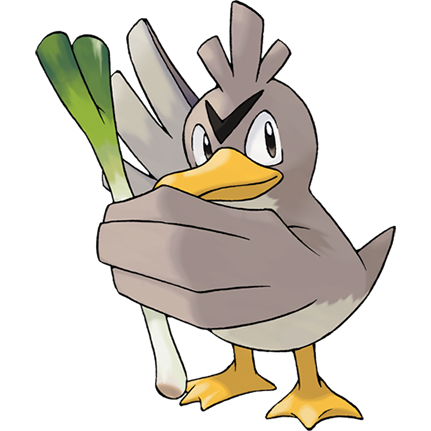 If there were an award for the most overlooked and unappreciated pokemon in the first generation, I don't doubt Farfetch'd would either win or come pretty damn close. Even back during the height of Pokemania, I remember people forgetting the poor thing ever existed. Fans of the lonely duck have clamored for an evolved form for two decades with no luck, and it's steadily been considered the worst fully evolved pokemon in the lowest competitive metagame tier.

Farfetch'd is basically a novelty pokemon, seemingly conceived only to add a little more collectability to the original roster. It's based on a Japanese proverb that basically means "a duck has come bearing green onions," indicating a very fortunate but extremely unlikely turn of events - since duck comes out pretty delicious cooked in onion.

Farfetch'd, however, uses its leek like a sword, so it's kind of like an ironic parody of the phrase. The duck has shown up with its own onions, but it's also going to use them to kick your ass. That's cute. Farfetch'd really does deserve that evolution one of these days, which I'm fully expecting to look like a badass samurai duck with topknot-shaped feathers and a huge long leek katana.

It's just a duck holding a leek, but that's pretty whimsical, and it deserves a nice rating for how much it's put up with these long twenty years.