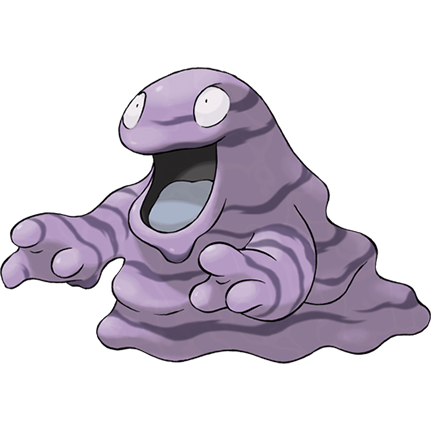 Yeah! Now we're talking!!! Every single monster franchise needs that simple, oozing slime creature, and Grimer here isn't just any slime creature, but formed entirely from toxic, corrosive industrial waste! The pokedex has a grand old time telling us how filthy and repulsive this pure poison type is; it leaves soil barren in its path, it guzzles raw sewage for sustenance, it reeks to high heaven and it's even said to be "germ infested." It's chemically poisonous and swimming with biological disease!

There's virtually no chance that exposure to Grimer doesn't cause some sort of terminal medical condition or twenty, but apparently nobody minds letting ten year old children collect, befriend and weaponize them for fun, fame and glory. I guess that's not a whole lot different than letting them ride a horse that's constantly on fire. 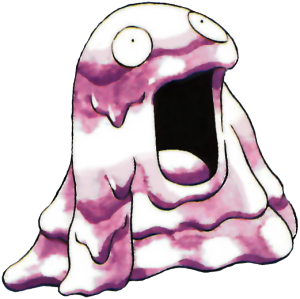 As simple and perfect as Grimer's formula may be, I still have some modestly nuanced feelings about its design. My favorite thing about Grimey used to be its vacant, ghostly stare - the face of something that knows it shouldn't exist. Something that constantly feels itself melting and withers everything it touches. A real "moaning zombie" vibe captured by almost no other pokemon.

It's only in relatively recent years that Grimer has taken on a more energetic, menacing countenance in its official artwork and sprites, which just doesn't have quite the same spooky charm.

When Pokemon landed in my early teens, my very first impression of Grimer was actually that it was so muppet-like. It looked, to me, like a horrifying slimy parody of a googly-eyed Sesame Street puppet. A melting Cookie Monster. I knew that wasn't intentional, but I got a real kick out of it regardless. 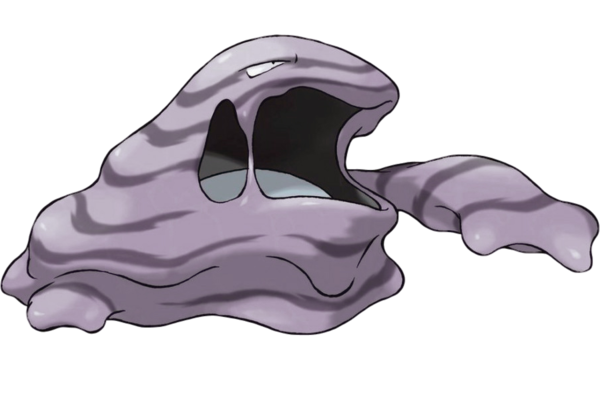 Grimer evolves into Muk, which has those damn triangle eyes again, damn it, but at least they're pained triangle eyes. Muk is nothing more than a much larger, much goopier Grimer, appearing even less solid and more gelatinous than ever. That dripping strand of slime over its mouth really adds a lot to a simple design, and its overall shape gives an impression that the whole thing would collapse into a formless pool if it wasn't putting significant effort into holding itself up.

Judging by some of the artwork - official and unofficial - I've seen around the internet, it's also important to point out here that Grimer and Muk are not "striped." The darker stripes are shading, representing ripples in their flowing, fluid surface. 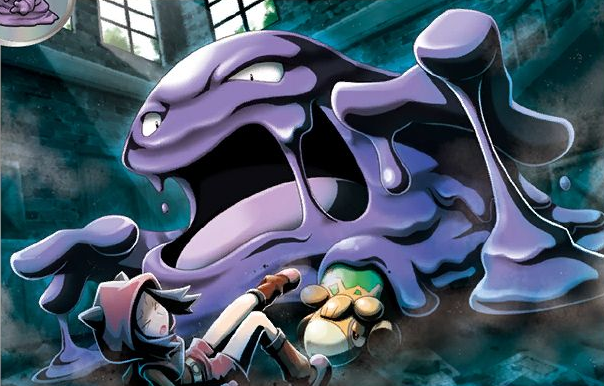 The toxic sludge pokemon are extremely simple concepts and equally simple designs, but they've got a lot of freaky, menacing personality to them, and are another reminder that what we're dealing with here are indeed pocket monsters.

Naturally, I've always rooted for Muk to get an evolution, which I suppose would be a mega evolution these days, but it's difficult to imagine how its design could be elaborated upon without ruining its basic appeal. Perhaps it could carry a garbage can around like a snail's shell, or acquire legs and tail to become more of a sloppy, melting kaiju-like monster. If we wanted to get weirder, it might be cool to have a bunch of tiny Grimer's sprouting out of Muk's back, like a pipa frog, and I always thought Muk would look pretty cool if its eyes were inside of its mouth. I mean, I think ANYTHING looks cool with its eyes inside its mouth, but a heap of rancid scum with a huge, gaping throat is pretty much begging for it.

These near-flawless goopers have always been high on my list of team material.