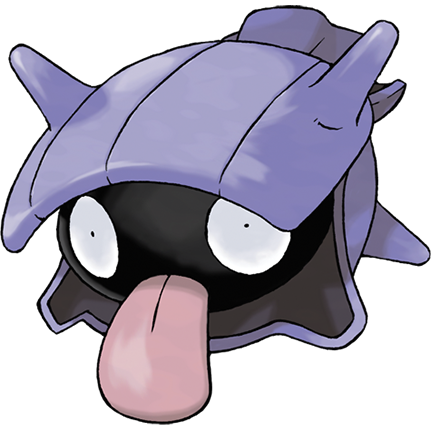 There's Slowbro's symbiotic pal! I didn't realize until doing these reviews how far apart they were in the pokedex, or that Slowbro is the one that comes first. That kinda seems like a bit of an oversight, doesn't it? Reading the 'dex in order would just make a lot less sense.

Anyway, a wild-type, free living Shellder takes on a water/ice bivalve form, rather than a gastropod, and what a lovable bivalve it is! Its shell is just so pleasantly designed, it has those spooky circular eyes I love so much, and it has a comical pink tongue representative of a bivalve's tongue-like "foot." Like many other cartoon mussels, it gives the impression of having a face inside of a mouth, which I just got done saying is one of my favorite design features wherever it comes up. 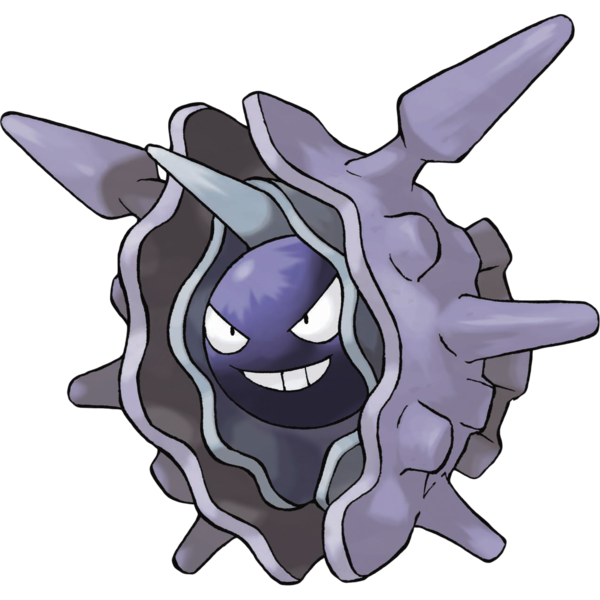 You can guess, then, why I'm not quite as fond of Cloyster's smug mug. I really am a total sucker for cute, and especially weird-cute, like Shellder, Grimer, Psyduck and Magnemite. Actually, I guess I'm just a sucker for those perfectly circular eyes with little dot-pupils. They're basically the eyes Mizuki Shigeru gave to 90% of his monsters.

Still, Cloyster is an interesting creature. You can interpret its "head" as its own black pearl, and that rugged, multi-layered shell is one of the most elaborate yet organic designs in the original 151. Whether its notorious resemblance to a certain part of the human anatomy detracts or enhances the appeal is up to you, but it does make the pearl-head look like a demonic shadow-baby emerging into the world, and that's pretty funny. 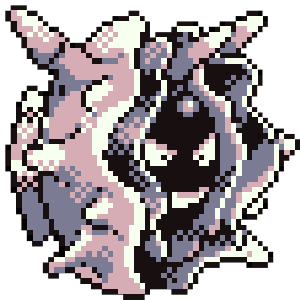 My only gripe, besides the drop in cuteness, is that the pokedex claims nobody knows what Cloyster really looks like, and coupled with its original sprites, I get the feeling it actually wasn't supposed to have a black sphere for a head. Its original concept was clearly more of an oyster with a dark, shadowy hole in the middle, eyes and teeth leering out of the darkness. This, I could definitely get more behind than the rather underwhelming pearl-baby-orb.

To go on a side-rant here, people have been quick to say in many of these reviews that the pokedex is only semi-canon hyperbole, but 1), I don't care, and 2), it's still the most insight we're ever given into these creatures. Reflected by their play mechanics and used as a springboard for their anime and manga appearances, Pokedex entries are consistently treated like the setting's highest authority. I've always considered them canon, and for reviewing purposes I always will, excepting only where numerical data is impossibly absurd, like when a pokemon burns hotter than a million suns and can bench-press the moon.

It may look like more of a douchebag once it evolves, but I still love the idea of a pet battle-monster that's just a big, nasty scallop with ice powers.