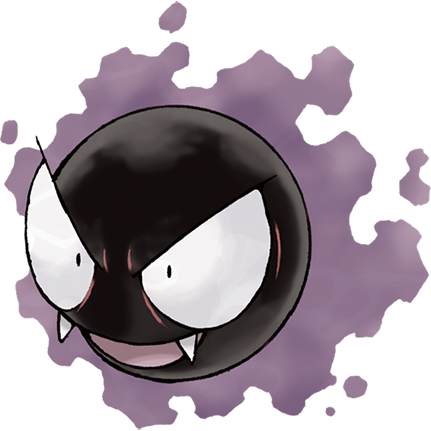 Among the people who eagerly anticipate my pokemon reviews, I'm sure this has been one of the most anticipated of them all. Almost everyone loves the Gastly line, the only "ghost" type pokemon in the original 151, even if they've long since been outshined by the weirder and wilder depths of the game's spooks.

It's funny how Gastly comes immediately after Cloyster, and basically has the exact same face. This lead a lot of people back in the day to speculate that Gastly was specifically the ghost of a dead Cloyster, which is still interesting enough for me to support, though it seems more like the majority of "ghost" pokemon aren't really the spirits of the dead at all, but creatures who naturally exist in an intangible, extradimensional state. 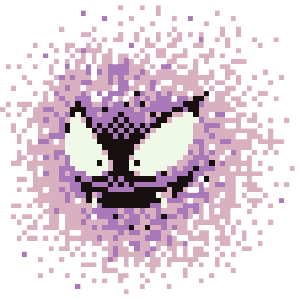 Like Cloyster, I also feel Gastly's solid orb design wasn't meant to be its "official" anatomical plan, but something adopted for its pure functionality. Gastly is supposed to have a completely gaseous form, and that's communicated beautifully by its very oldest in-game sprite.

This "gaseousness" is also the only rational reason for Gastly to be part poison, besides my personal theory that poison typing was just slapped onto every "scary" pokemon in the first generation. That our only ghost/poison pokemon has basically nothing to do with poison bugs the heck out of me, because a thematically toxic ghost is an awesome concept with enormous design potential. Why not a poisonous ghost made of dripping acid? A poisonous ghost made of reeking garbage fumes? A poisonous ghost that looks like a tattered haz-mat suit? Come on, Pokemon. It's been twenty years and your only biohazardous phantasm is something that only communicates its "ghost" aspect. 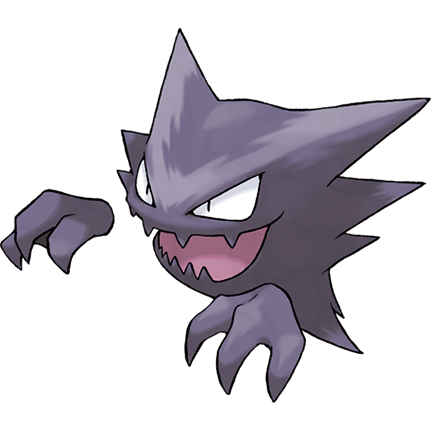 Gastly evolves into Haunter, which seems to be a popular favorite over its previous and subsequent stages, possibly due to its more phantasmal appearance and floating, detached hands, though this is another one I thought looked a lot better in its earliest sprite: 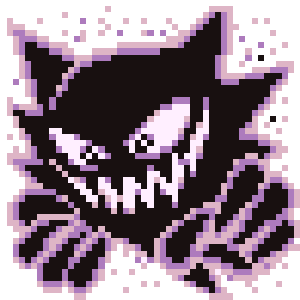 Is that not cool as heck? Early Haunter had a more rounded head-body and a more jagged mouth, more like a carved Jack O' Lantern face in the dark.

We can see how Haunter follows logically from Gastly, of course; it's still only semi-corporeal, but it's on its way to forming a more solid body out of Gastly's misty form, or rather, manifesting itself further into our own dimension! 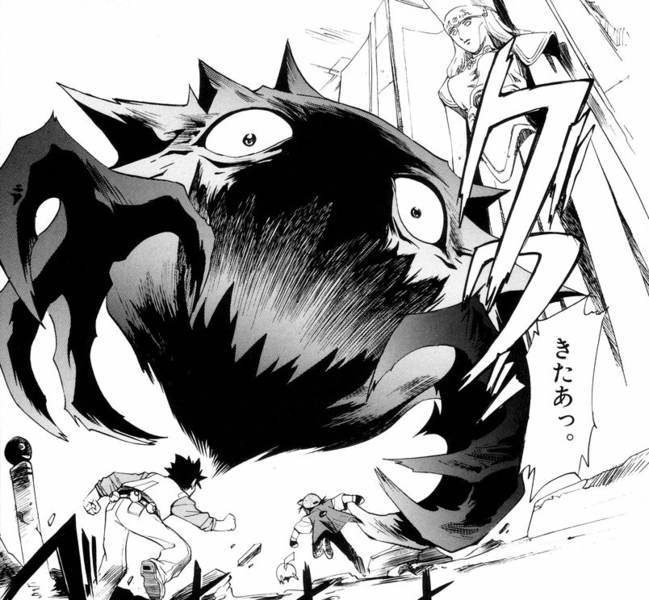 I also couldn't possibly pass up an opportunity to mention Haunter's first appearance in the Pokemon Manga; namely, a giant, ancient Haunter named The Black Fog who murdered people and ate their souls. To think, it was the anime that horrified bible thumpers. 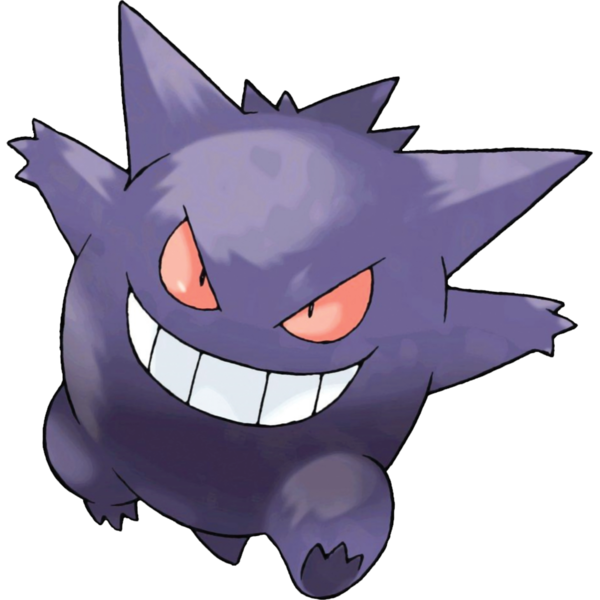 We now come to Gengar, the original fully-evolved ghost. Back in the day, I thought its solid, semihumanoid body made it the least interesting of its line, but I've come to appreciate both its "Cheshire Cat" smile, the fact that any child can easily draw its nicely minimalistic details and the fact that it only looks so solid because it finally finished forming out of paradimensional gas. On its own merits, Gengar is a very fun little shadow-gremlin, though I do have good reason to believe this was not, in fact, always intended to be its true final form. 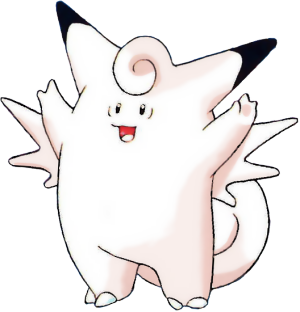 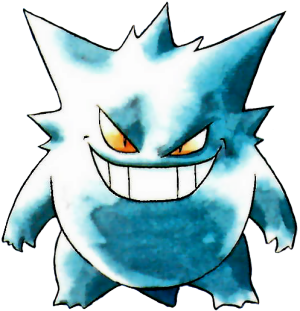 Many fans have pieced together by now that Gengar was designed to look like an "evil" inversion of Clefable, which you may recall was almost the mascot of the entire series. Even the name, Gengar, comes from Doppelganger, and its pokedex consistently talks about Gengar imitating the shadows of other beings.

I feel very strongly that Gengar was originally conceived as a pokemon capable of taking almost any conceivable shape, and had they the technical capacity, manpower and budget, the original games might have provided it with multiple, alternate forms all along. The Clefairy-like shape was simply chosen as a convenient, default example of a creature with many possible configurations, and by the time the games had a capacity to reflect Gengar's true concept, this design had already been cemented as its most official. 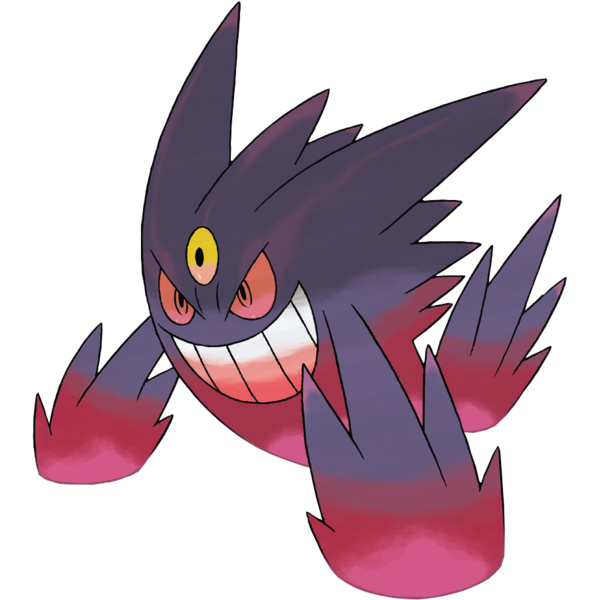 X&Y's addition of Mega Gengar could have easily taken Gengar back to its true Doppelganger roots. I appreciate that it's less humanoid, and I like to think its "third" eye is actually a glimpse into the more alien entity that is the "true" Gengar, but now that we're using 3-d graphics, a Doppel-Gengar could have even been a simple matter of creating Gengar "skins" to map onto other pokemon models. At the very least, it could have been given a small set of generic alternate forms, like a "bug" Gengar, a "plant" Gengar, a bird, a sea creature, and so forth. They really dropped the ball, here.

...So anyway, in October, 2015, two of our best friends flew in from Florida to Iowa to be there when Rev and I got married on Halloween. Because we were adults ranging from 26 to 32, we all tried to draw an assortment of pokemon "from memory" as hypothetical Gengar forms. They missed some major opportunities and their typing is a waste, but the Gastly line is still really, really cool and another cherished Hallmark of the pocket monsters property.