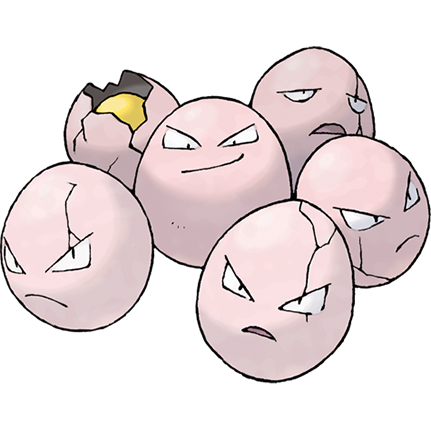 Today, we have another of my favorite first-gen pokemon that I've seldom talked about in the past. It's also another pokemon, like Voltorb, that some fans have called "uncreative" for the first generation, but how many things out there are weirder or less expected than a colony of psychic eggs? I don't even mind the generic faces in this instance. It's just too cool that a bunch of little cracked egg-critters form telepathic clusters together. I almost wish they were pure psychic types, because the idea of an organism developing mind-powers at only the egg stage is ingeniously strange in itself.

Exeggcute, however, are both psychic and grass types. They're not real eggs at all, but extremely egg-like seeds! It's an entirely different sort of weird, but I can still dig it. I'm a big fan of plant monsters that don't really look immediately plant-like. Not all plants do in our world, either!

I also really like that at least one member of the group is always shown broken open. It's just a really neat little touch. 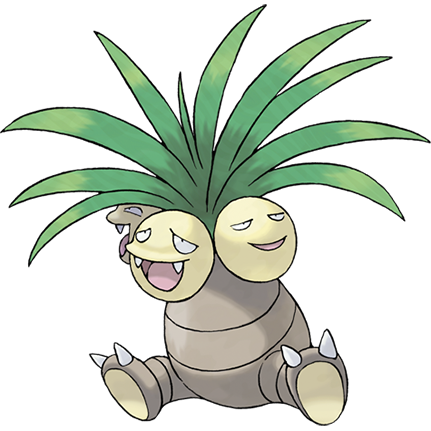 I kinda wish Exeggcute could evolve into even more freaky psychic eggs, but my soft spot for Exeggutor is just as big. It's a big, walking palm tree with multiple, telepathic heads growing off it like coconuts. That's amazing. That's a pocket monster really underlining the "monster" part, the kind of thing that might be played for pure creep factor in a mythological context.

Can you even imagine these things in the real world? There's no conceivable way they wouldn't be nightmarish, especially when their heads apparently drop right off and roll away, but in the pokemon world, a tree with heads growing on it is just another big, lovable goofball to buddy up with.

Exeggcute and Exeggutor remain the only non-legendary grass/psychic pokemon, and nothing could really be more perfect for such an oddball combination.

The psychic egg-fruits and their face-tree evolution are by far among the first generation's most outstanding and original creations.